This website requires the use of Javascript to function correctly. Performance and usage will suffer if it remains disabled.
How to Enable Javascript
Sudan Military Seizes Power, Dissolves Transitional Government 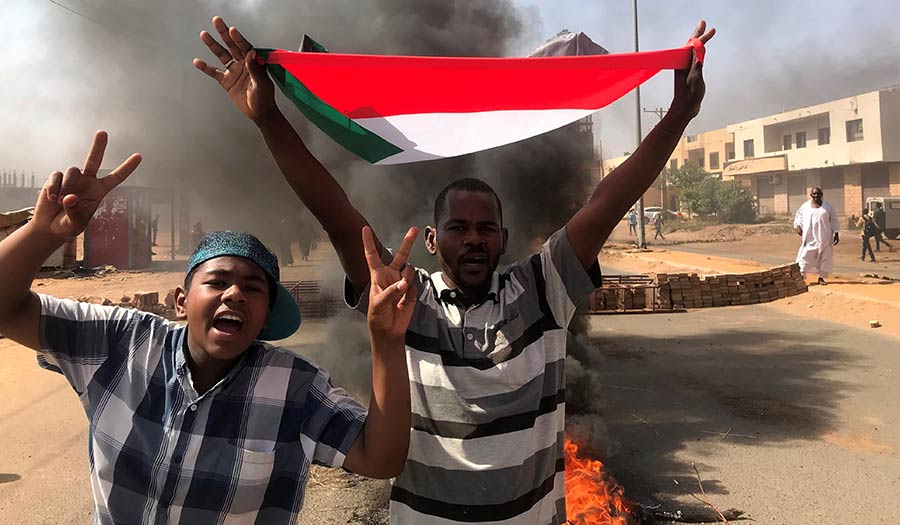 Reuters/El Tayeb Siddig
A protester waves a flag during a military coup in Khartoum, Sudan (Oct. 25, 2021).

KHARTOUM (Reuters) – Sudan’s military seized power in a coup on Monday, arresting members of a transitional government that was supposed to guide the country to democracy following the overthrow of long-ruling autocrat Omar al-Bashir in a popular uprising two years ago.

Gunfire was heard as opponents of the takeover took to the street and medics said several people had been hurt in clashes.

General Abdel Fattah al-Burhan, who headed the Sovereign Council that had shared power between the military and civilians, said the council had been dissolved.

He announced a state of emergency, saying the military needed to protect the country’s safety and security.

“We guarantee the armed forces’ commitment to completing the democratic transition until we hand over to a civilian elected government,” he said, setting elections for July 2023.

“What the country is going through now is a real threat and danger to the dreams of the youth and the hopes of the nation.”

Prime Minister Abdalla Hamdok was detained and taken to an undisclosed location after refusing to issue a statement in support of the takeover, said the information ministry, which was still apparently under the control of Mr. Hamdok’s supporters.

The ministry called Gen. Burhan’s announcement a military coup and urged resistance. It said tens of thousands of people opposed to the takeover had taken to the streets and had faced gunfire near the military headquarters in Khartoum.

At least 12 people were injured in clashes, a doctors’ committee said, without providing further details.

Sudan—which has a history of coups—has been on edge since a failed plot last month unleashed recriminations between military and civilian groups sharing power uneasily following Mr. Bashir’s overthrow.

Tensions had built as a coalition of rebel groups and political parties aligned themselves with the military and called on it to dissolve the civilian government, while several cabinet ministers took part in huge protests in Khartoum and other cities against the prospect of military rule.

The director of Mr. Hamdok’s office, Adam Hereika, told Reuters the military had mounted the takeover despite “positive movements” towards an agreement with Mr. Hamdok following meetings with U.S. special envoy Jeffrey Feltman.

Joint forces from the military and from the paramilitary Rapid Support Forces were stationed in the streets of Khartoum.

The information ministry said troops had arrested civilian members of the Sovereign Council and government figures. It called on Sudanese to oppose the military attempt “to block the democratic transition.”

“We raise our voices loudly to reject this coup attempt,” it said in a statement.

The military was meant to pass leadership of the Sovereign Council to a civilian figure in the coming months. But transitional authorities had struggled to move forward on issues including whether to hand Bashir over to the International Criminal Court, where he is wanted for war crimes.

In recent weeks, civilian officials had claimed credit for some tentative signs of economic stabilization after a sharp devaluation of the currency and the lifting of fuel subsidies.

Mr. Burhan said it was incumbent on the armed forces to act after infighting between some political forces and “the striving for power” and “incitement to chaos and violence.”

U.S. envoy Feltman, who visited Sudan on Saturday and Sunday, said a military takeover would put U.S. aid at risk. The U.S. Embassy urged those disrupting the transition to democracy to stand down and let the civilian-led government continue its work.

Military forces stormed Sudanese Radio and Television headquarters in Omdurman and arrested employees, the information ministry said on its Facebook page. Two major political parties, the Umma and the Sudanese Congress, condemned what they called a coup and campaign of arrests.

Elsewhere in Africa this year, soldiers have staged coups in Mali and Guinea, while in Chad, the military took power after the death of a long -ruling autocrat. Niger also thwarted a coup attempt in March.