This website requires the use of Javascript to function correctly. Performance and usage will suffer if it remains disabled.
How to Enable Javascript
Economic Oddity: Record Job Openings and Many Unemployed 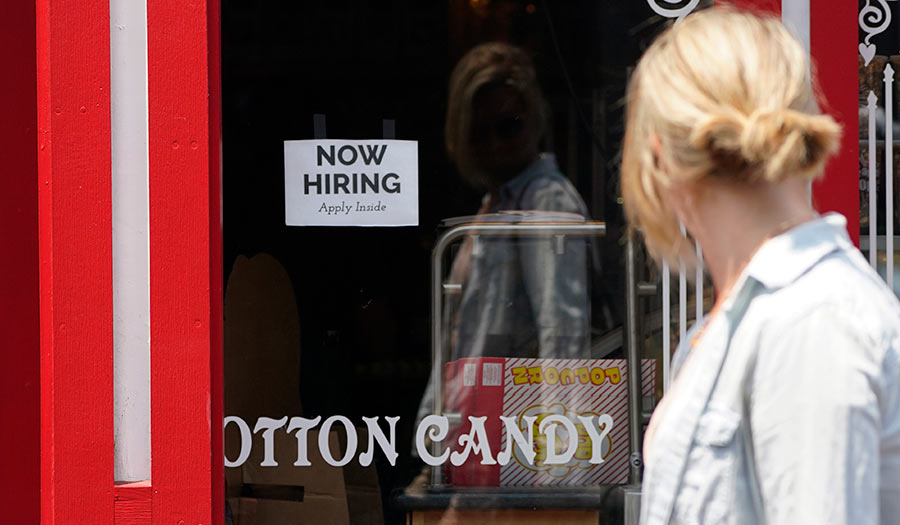 AP/Rich Pedroncelli
A hiring sign is posted in the window of The Wharf Chocolate Factory at Fisherman’s Wharf in Monterey, California (Aug. 6, 2021).

WASHINGTON (AP) – The disconnect is jarring: Across the United States, employers who are desperate to fill jobs have posted a record-high number of job openings. They are raising pay, too, and dangling bonuses to people who accept job offers or recruit their friends.

And yet millions more Americans are unemployed compared with the number who were jobless just before the viral pandemic flattened the economy a year and a half ago.

The puzzling mismatch is a reflection of an unsettled economy—one that all but shut down at the height of the pandemic, then bounced back with unexpected speed and strength thanks to the rollout of vaccines and vast infusions of government spending. And now the economic outlook has been clouded yet again by a resurgence of COVID-19 cases linked to the highly contagious delta variant.

On Wednesday, the Labor Department reported that employers posted 10.9 million job openings in July—the most on records dating to 2000. For job-seekers, the abundance of vacancies is a welcome occurrence. Yet the magnitude of unfilled job openings poses a potential problem for the economy, especially if it persists over the long run: Companies that are short of employees cannot capitalize on a surge in consumer demand, thereby hampering economic growth.

The unprecedented demand for workers is happening even while 8.4 million Americans are unemployed, up from 5.7 million in February 2020. And the economy is still 5.3 million jobs short of the number it had before the pandemic paralyzed the United States.

“Employers really want to staff up right now, especially those sectors that were hit hard by the pandemic,” said Nick Bunker, research chief at the Indeed Hiring Lab. “But a fair number of unemployed or job seekers don’t feel that same sense of urgency.”

Some would-be job seekers remain fearful of the coronavirus, especially given the spread of the delta variant. Some have struggled to find or afford child care at a time when the status of schools is in flux. Others are rethinking their lives and careers after being locked in at home and spending more time with their families.

Whatever the reason, many “don’t feel the need or desire to just jump into a job right now,” Mr. Bunker said.

The neediest employers are jacking up pay to try to attract workers. Over the past year, average hourly wages, even after being adjusted for inflation, have jumped 5.8 percent for restaurant and bar workers and 6.1 percent for hotel workers.

“It may also be time to pay more attention to the genuinely lousy nature of many of the jobs that are available,” Joshua Shapiro, chief U.S. economist at the Maria Fiorini Ramirez Inc. consultancy, wrote in a research note, adding: “Let’s face it, even $20 per hour with few if any benefits isn’t a princely sum.”

In the meantime, workers are leaving their employers in historic numbers, apparently confident enough in their job prospects to try something new. In its report Wednesday, the Labor Department said that 3.98 million people quit their jobs in July, just shy of the record 3.99 million who did so in April.

Many businesses have blamed generous federal unemployment benefits—including a $300-a-week supplement to state aid—for allowing the jobless to take their time returning to work. In response, about half the states withdrew from the federal program. But in a report last month, economists Peter McCrory and Daniel Silver of J.P. Morgan found “zero correlation,” at least so far, between job growth and state decisions to drop the federal unemployment aid.

In any case, the federal benefits ended nationwide on Monday, just as more and more schools are reopening. Mr. Bunker said he is hopeful that the job market will return to its pre-pandemic state sometime next year.

Then again, the delta variant, and the uptick in COVID-19 cases it has caused, risks slowing the recovery. On Friday, the Labor Department reported that employers added just 235,000 jobs in August—only about a third of the number that economists had expected and down dramatically from around 1 million jobs that were added in June and July each. With the delta variant having discouraged some people from venturing out in August, restaurants and bars cut 42,000 jobs, the first such monthly drop this year. Hotels added just 7,000, the fewest since January.

“Rising virus fear amid a renewed surge in COVID infections will likely delay the return of some individuals to the workforce,” said Lydia Boussour, lead U.S. economist at Oxford Economics. “While we expect the labor market will continue to make some progress in coming months, it will likely take some time for these severe labor imbalances to get resolved.”