This website requires the use of Javascript to function correctly. Performance and usage will suffer if it remains disabled.
How to Enable Javascript
LA’s Venice Beach a Flashpoint in City’s Homeless Crisis 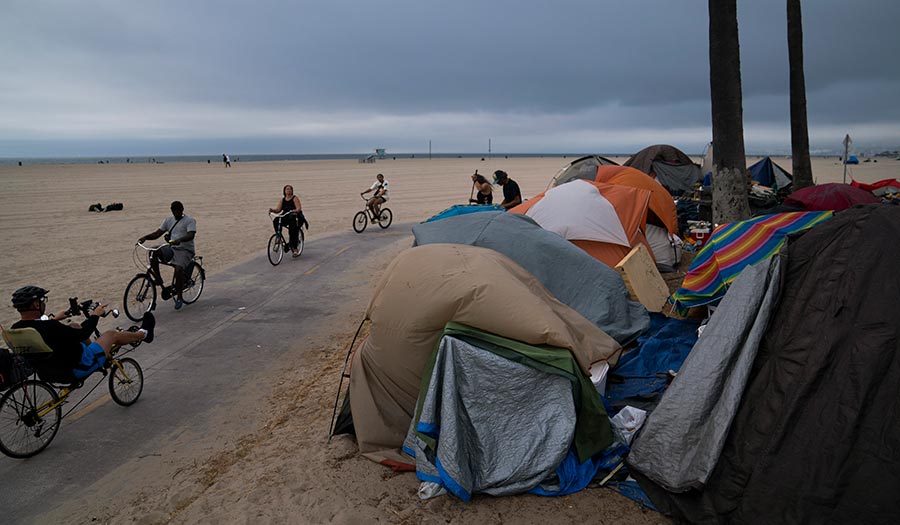 AP/Jae C. Hong
People ride their bikes past a homeless encampment set up along the boardwalk in the Venice neighborhood of Los Angeles, California (June 29, 2021).

LOS ANGELES (AP) – David de Russy steered his bicycle through a sparse crowd of midweek visitors streaming down Los Angeles’ Venice Beach boardwalk between multimillion-dollar homes, T-shirt shops and eateries on one side and vendors peddling paintings, hawking crystals and offering tarot card readings on the other.

For the first time in about a year, he was happy the view toward the ocean was largely unobscured with the misery of homeless camps that mushroomed along the sands during the coronavirus pandemic.

“Thank God it’s getting cleared up,” Mr. de Russy said, though a remaining cluster of tents renewed what he described as “this sickening feeling that comes with seeing human beings in that condition.”

An effort to house homeless people and remove clutter that proliferated is nearing completion. But residents upset over government inaction that allowed the problem to get out of control are warily watching how it unfolds and whether the cleanup takes hold.

A problem once largely limited to the Skid Row section of downtown has spread to virtually all parts of Los Angeles. The nation’s second-largest city also has the second-largest homeless population in the country—41,000 among the overall city population of 4 million people, according to the most recent survey conducted before the pandemic.

Venice has a disproportionate concentration with an estimated 1,600 homeless people in the neighborhood of about 40,000.

The area has become a flashpoint because of its visibility as an LA landmark—the boardwalk attracts an estimated 10 million visitors per year—and a well-publicized political spat over fixing the problem.

When COVID-19 struck, streets already were lined with inhabited RVs and sidewalks overflowing with tents, collections of bikes, furniture and shopping carts. Encampments sprang up along the beach when restrictions on camping were not enforced during stay-home orders.

At one point, more than 200 weather-beaten tents had sprouted along the sand and grassy knolls that run between the bike path and Ocean Front Walk, the concrete boardwalk. Mattresses were stacked next to volleyball nets. Tarps reinforced with pallets, fencing and plywood created larger shelters. Sofas and chairs served as open-air living rooms.

A live-and-let-live ethos long prevailed in the gritty bohemian beach community of bungalows that in recent years became home to the wealthy as tech companies have moved in and sleek modern homes have gone up.

A certain edginess always coexisted with a peaceful vibe, but the concentration of homeless people has left residents and business owners frustrated and angry.

Videos posted to social media showed a homeless man being shot, men and women throwing wild punches and wrestling on the boardwalk, and a tent being set ablaze in the sand. One man was found bludgeoned in his tent last month and another homeless man was arrested as the suspected killer.

Residents tell stories of break-ins and thefts, seeing people use heroin in the alleys behind their homes or defecating in their yards.

“This is no way for people to live,” said Brad Neal, a lawyer and owner of 10 buildings in Venice. “Everyone is suffering. Not just the unhoused but the housed as well.”

Mr. Neal, who recently armed himself with a club to get to his car after he said he was almost assaulted, said he worries about his tenants.

Mr. Neal overcame drug addiction years ago and echoes the sentiment of others when he says he knows he could wind up on the street. But he said residents who have a genuine concern for the well-being of the people living outdoors—many of whom are struggling with addiction and mental health issues—are beginning to lose their empathy.

Residents fumed at City Councilman Mike Bonin, saying he neglected the area for too long. Brash LA County Sheriff Alex Villanueva inserted himself into the debate, veering outside his traditional jurisdiction and receiving a hero’s welcome of sorts when he showed up on the boardwalk in a cowboy hat last month promising a cleanup.

Of the 250 homeless people the sheriff’s team spoke with, 20 moved into shelters, five went to mental health or drug programs, and six were reunited with family and friends, sheriff’s Lieutenant Geff Deedrick said. They ended their work once the city program began.

As of Tuesday, at least 175 people had agreed to be placed in shelters by workers from St. Joseph Center, said the nonprofit carrying out the Bonin plan.

One of the main questions is whether people will accept housing and stay there. A similar effort to remove a large encampment near Penmar Golf Course—a public nine-hole course about a mile from Venice Beach—succeeded in clearing the area but many people ended up back on the streets.

Some went to a temporary shelter the city set up in a former bus yard. But neighbors complained others planted their tents outside the shelter. Some who stayed indoors overnight maintained tents where they could keep possessions or use drugs and drink during the day.

As bicyclist David de Russy pedaled along the beach so he could report back to friends about the cleanup’s progress, he had mixed emotions as he reached an area where about 45 tents remained.

He was optimistic the beach encampments would be removed and relieved so many people had been helped. But he pondered the fate of the most resistant and wondered where they would end up. 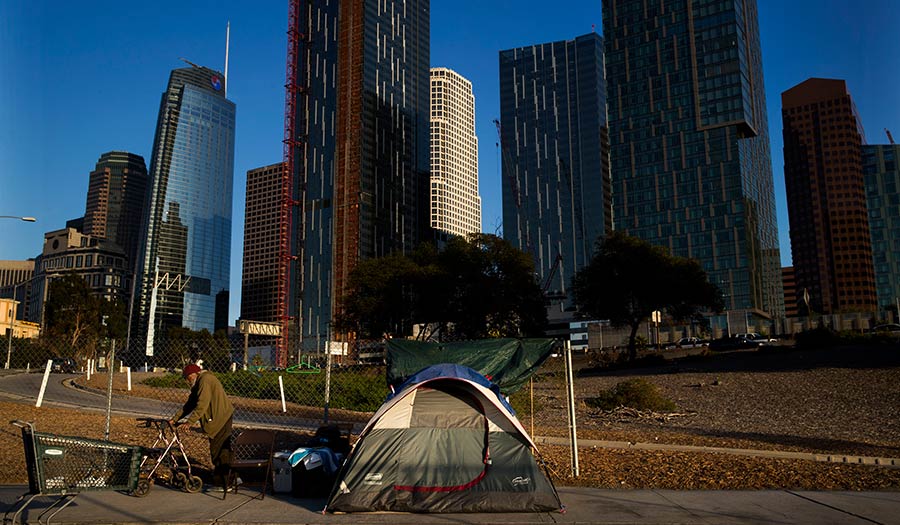 Life on the Streets – America’s West Coast Homeless Crisis
Across from the elegant Millennium Biltmore hotel, Moi Williams, 59, reclines on his side, resting on an elbow on concrete steps leading to a park in the heart of downtown Los Angeles.