This website requires the use of Javascript to function correctly. Performance and usage will suffer if it remains disabled.
How to Enable Javascript
Police Arrest Bangladesh Factory Owners after Fire Kills 52 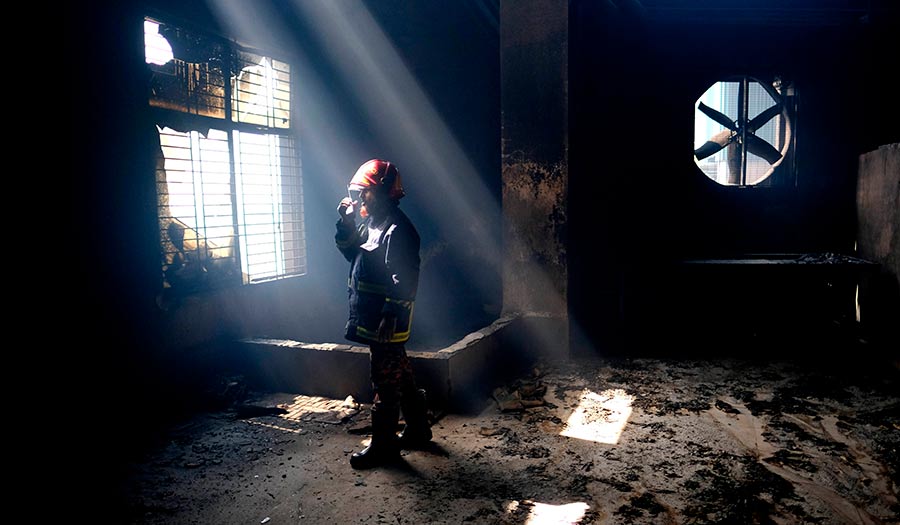 AP/Mahmud Hossain Opu
A firefighter communicates with his colleagues on a walkie talkie inside a burnt factory in Rupganj, outside Dhaka, Bangladesh (July 9, 2021).

DHAKA, Bangladesh (AP) – Police in Bangladesh arrested eight people Saturday on murder charges in connection with a factory fire that killed at least 52 people, many of whom were trapped inside by an illegally locked door, a senior police official said.

The blaze began Thursday night at the five-story Hashem Foods Ltd. factory in Rupganj, just outside the capital Dhaka, sending huge clouds of black smoke billowing into the sky. Police discovered piles of bodies Friday afternoon after the fire was extinguished.

“We have arrested them for murder charges,” Jayedul Alam, police superintendent for Narayanganj district, told The Associated Press by phone. “They are in our custody now.”

Home Minister Asaduzzman Khan said that among those detained is the managing director of Sajeeb Group, which owns the factory.

The minister did not provide further details, but said those responsible would be punished.

By Saturday evening, a court in Dhaka allowed all eight suspects to remain in police custody for four days for interrogation.

Bangladesh has a tragic history of industrial disasters, including factories catching fire with workers locked inside. Big international brands, which employ tens of thousands of low-paid workers in Bangladesh, have come under heavy pressure to improve factory conditions.

In similar cases, factory owners have faced culpable homicide charges for negligence, and it is illegal for a factory to lock its exits when workers are inside during production hours.

The main exit of the factory that caught fire Thursday was locked from the inside, a Fire Service and Civil Defense official said, and many of those who died were trapped.

One of them was 23-year-old Rima Akter, who made desperate calls to her family as the fire engulfed the factory.

On Saturday, her mother and other family members struggled to identify the young woman’s remains in the morgue at the Dhaka Medical College Hospital.

“We have checked 36 body bags, but it is very difficult to identify her,” her brother-in-law Arafat Rahman said.

Her mother, Josna Begum, cried as officials tried to reassure several families waiting outside the hospital that their loved ones’ bodies would be returned once DNA tests were completed. Forensic experts worked to identify the dead, taking DNA samples from victims’ family members, and by late Saturday afternoon samples from 33 of the deceased had been collected, officials at the hospital said.

“My daughter worked to provide for her educational expenses. She was attending online classes and exams. I have no one else in the world…what is there left for me to do now?” Josna Begum said.

Prova Barman, father of Kompa Rani Barman, who died in the fire, spoke to reporters in front of the factory Saturday.

“My daughter’s body was found over here. She was on the third floor. The supervisor locked in many girls there, including my daughter, during the fire. Many girls could not escape after the gate was locked,” he said.

Other workers jumped from the upper floors, and at least 26 suffered injuries, the United News of Bangladesh agency reported Friday.

The factory is a subsidiary of Sajeeb Group, a Bangladeshi company that produces juice under Pakistan’s Lahore-based Shezan International Ltd. According to the group’s website, the company exports its products to a number of countries including Australia, the United States, Malaysia, Singapore, India, Bhutan, Nepal and nations in the Middle East and Africa.

Despite the South Asian nation’s rapid economic growth, corruption and lax enforcement have resulted in many deaths over the years.

In 2012, about 117 workers died when they were trapped behind locked exits in a garment factory in Dhaka.

The following year, more than 1,100 people were killed when a building that housed five garment factories collapsed, becoming the country’s worst industrial disaster.

Investigators initially said those accused of wrongdoing would be charged with culpable homicide, which carries a maximum punishment of seven years in jail. They later changed the charges to murder due to the gravity of the disaster.

However, powerful factory owners often take advantage of the slow pace of the legal system, dragging out the process for years. The murder cases in the 2013 factory collapse are still ongoing.

The tragedy did spark tougher safety rules for the garment industry, but many other sectors fail to maintain safety standards and disasters have continued.

In February 2019, a blaze ripped through a 400-year-old area cramped with apartments, shops and warehouses in the oldest part of Dhaka, killing at least 67 people. 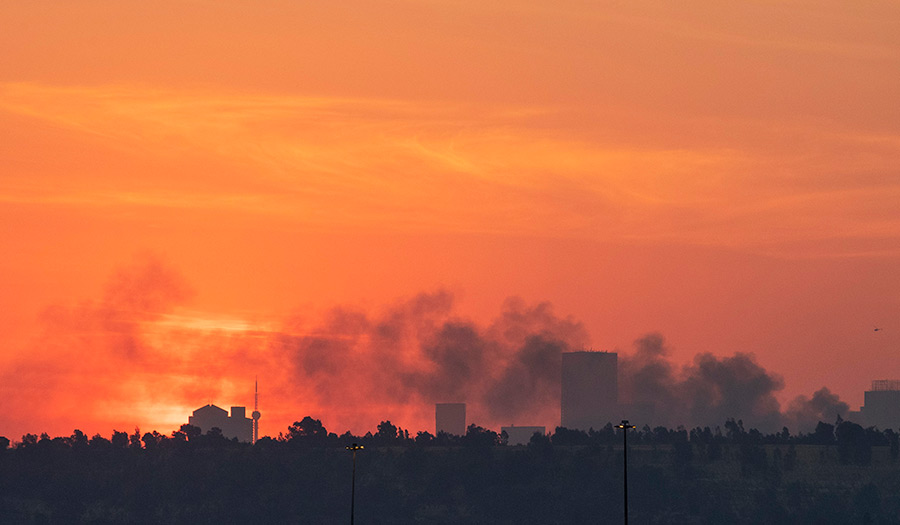