This website requires the use of Javascript to function correctly. Performance and usage will suffer if it remains disabled.
How to Enable Javascript
International Tourism May Not Rebound Until 2023

International Tourism May Not Rebound Until 2023 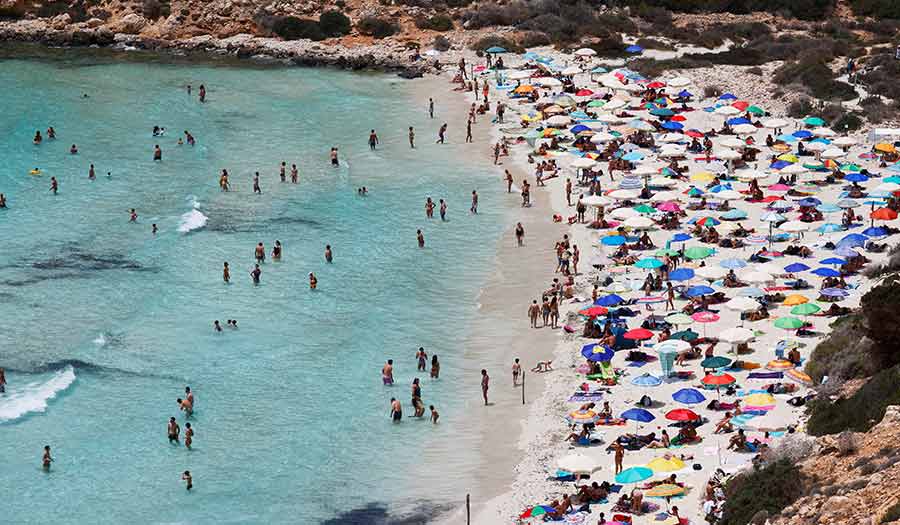 Reuters/Guglielmo Mangiapane
People sunbathe on the beach on the Sicilian island of Lampedusa, Italy (June 22, 2021).

GENEVA (Reuters) – International tourism arrivals are set to stagnate this year, except in some Western markets, causing up to $2.4 trillion in losses, a UN study said on Wednesday, adding the sector is not expected to rebound fully until 2023.

COVID-19 vaccination and certificates are key to restoring confidence in foreign tourism, which provides a lifeline for many countries, especially small island states that rely heavily on the sector to provide jobs, it said.

In 2020, international arrivals plunged by 73 percent from pre-pandemic levels in 2019, causing estimated losses of $2.4 trillion in tourism and related sectors, according to the report by UNCTAD and the UN’s World Tourism Organization (UNWTO).

“The outlook for this year doesn’t look much better,” Ralf Peters of UNCTAD’s trade analysis branch, told a news conference.

“The first three months were again bad, there was not much traveling happening,” he said.

“There is an expectation of a certain recovery in the second half of the year, at least for North America and Europe to a certain extent,” he told Reuters, crediting vaccinations.

The report sets out three scenarios for 2021, showing international tourism arrivals forecast to drop by between 63 percent and 75 percent from pre-pandemic levels, resulting in losses of between $1.7 trillion and $2.4 trillion.

“In international tourism we are at levels of 30 years ago, so basically we are in the ‘80s…Many livelihoods are really at threat,” said Zoritsa Urosevic, Geneva representative of the Madrid-based UNWTO.