This website requires the use of Javascript to function correctly. Performance and usage will suffer if it remains disabled.
How to Enable Javascript
Death Toll in Florida Condo Collapse Rises; 159 Still Missing 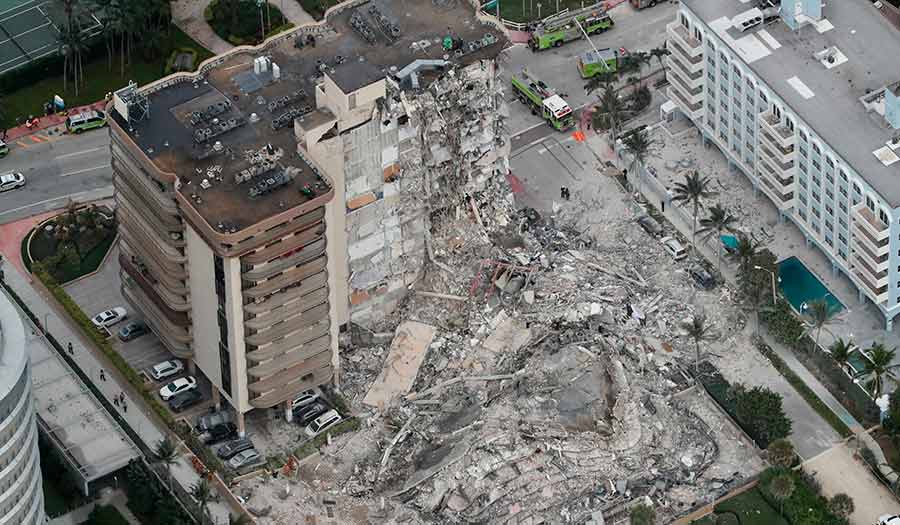 SURFSIDE, Florida (AP) – About 160 people were still unaccounted for Friday a day after an oceanside condominium building collapsed into a pile of rubble, and searchers combing through a twisted, shifting pile of concrete and metal feared the death toll of at least four could go much higher.

With scores of firefighters working overnight to reach any possible survivors both from under and atop the remains of the building, hopes rested on how quickly crews using dogs and microphones to sift through the wreckage could complete their grim, yet delicate task.

“Every time we hear a sound, we concentrate on those areas,” said Assistant Miami-Dade Fire Chief Raide Jadallah.

“Debris is falling on them as they do their work. We have structural engineers on site to ensure that they will not be injured, but they are proceeding because they are so motivated and they are taking extraordinary risk on the site every day,” she said.

The work focused on what was left of 12-story Champlain Towers South, which drew people from around the globe to enjoy life on South Florida’s Atlantic Coast, some for a night, some to live. A couple from Argentina and their young daughter. A beloved retired Miami-area teacher and his wife. Orthodox Jews from Russia. Israelis. The sister of Paraguay’s first lady. Others from South America.

State Senator Jason Pizzo of Miami Beach told the Miami Herald he watched as tactical teams of six worked early Friday to sift through the debris. He said he saw one body taken in a yellow body bag and another that was marked. They were taken to a homicide unit tent that was set up along the beach.

Many people remained at the reunification center set up near the collapse site early Friday morning, awaiting results of DNA swabs that could help identify victims.

Officials said no cause for the collapse has been determined.

Video of the collapse showed the center of the building appearing to tumble down first and a section nearest to the ocean teetering and coming down seconds later, as a huge dust cloud swallowed the neighborhood.

About half the building’s roughly 130 units were affected, and rescuers pulled at least 35 people from the wreckage in the first hours after the collapse. But with 159 still unaccounted for, work could go on for days.

Raide Jadallah, an assistant Miami-Dade County fire chief, said that while listening devices placed on and in the wreckage had picked up no voices, they had detected possible banging noises, giving rescuers hope some are alive. Rescuers were tunneling into the wreckage from below, going through the building’s underground parking garage.

Personal belongings were evidence of shattered lives amid the wreckage of the Champlain, which was built in 1981 in Surfside, a small suburb north of Miami Beach. A children’s bunk bed perched precariously on a top floor, bent but intact and apparently inches from falling into the rubble. A comforter lay on the edge of a lower floor. Televisions. Computers. Chairs.

Argentines Dr. Andres Galfrascoli, his husband, Fabian Nunez, and their 6-year-old daughter, Sofia, had spent Wednesday night there at an apartment belonging to a friend, Nicolas Fernandez.

Dr. Galfrascoli, a Buenos Aires plastic surgeon, and Nunez, a theater producer and accountant, had come to Florida to get away from a COVID-19 resurgence in Argentina and its strict lockdowns. They had worked hard to adopt Sofia, Mr. Fernandez said.

“Of all days, they chose the worst to stay there,” Mr. Fernandez said. “I hope it’s not the case, but if they die like this, that would be so unfair.”

Also missing was Arnie Notkin, a retired Miami-area elementary school physical education teacher, and his wife, Myriam. They lived on the third floor.

“They were also such happy, joyful people. He always had a story to tell, and she always spoke so kindly of my mother,” said Fortuna Smukler, a friend. “Originally there were rumors that he had been found, but it was a case of mistaken identity. It would be a miracle if they’re found alive.”