This website requires the use of Javascript to function correctly. Performance and usage will suffer if it remains disabled.
How to Enable Javascript
Russia Warns Britain It Will Bomb Ships Next Time

Russia Warns Britain It Will Bomb Ships Next Time 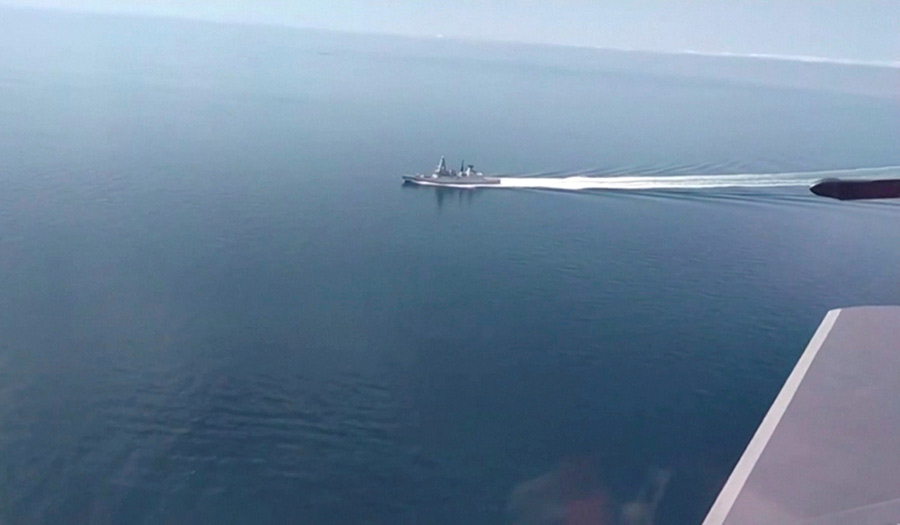 LONDON/MOSCOW (Reuters) – Russia warned Britain on Thursday that it would bomb British naval vessels in the Black Sea if there were any further provocative actions by the British navy off the coast of Russia-annexed Crimea.

Russia summoned the British ambassador in Moscow for a formal diplomatic scolding after the warship breached what the Kremlin says are its territorial waters but which Britain and most of the world say belong to Ukraine.

Britain said Russia was giving an inaccurate account of the incident. No warning shots had been fired and no bombs had been dropped in the path of the Royal Navy destroyer Defender, it said.

In Moscow, Russia summoned Ambassador Deborah Bronnert for a reprimand over what it said were Britain’s “dangerous” action in the Black Sea—while foreign ministry spokeswoman Maria Zakharova accused London of “barefaced lies.”

“We can appeal to common sense, demand respect for international law, and if that doesn’t work, we can bomb,” Deputy Foreign Minister Sergei Ryabkov told Russian news agencies.

Mr. Ryabkov, referring to Moscow’s version of events in which a Russian aircraft bombed the path of the British destroyer, said that in future bombs would be sent “not only in its path, but also on target.”

The Black Sea, which Russia uses to project its power in the Mediterranean, has for centuries been a flashpoint between Russia and its competitors such as Turkey, France, Britain and the United States.

Russia seized and annexed the Crimea peninsula from Ukraine in 2014 and considers areas around its coast to be Russian waters. Western countries deem the Crimea to be part of Ukraine and reject Russia’s claim to the seas around it.

Prime Minister Boris Johnson said the British warship, which was traveling from the Ukrainian port of Odessa to the Georgian port of Batumi, was acting in accordance with the law and had been in international waters.

“These are Ukrainian waters and it was entirely right to use them to go from A to B,” Mr. Johnson said. British Defense Minister Ben Wallace accused Russian pilots of conducting unsafe aircraft maneuvers 500 feet above the warship.

“The Royal Navy will always uphold international law and will not accept unlawful interference with innocent passage,” Mr. Wallace said.

Under international law of the sea, innocent passage permits a vessel to pass through another state’s territorial waters so long as this does not affect its security.

During its 2008 war with Georgia, Russia bristled at U.S. warships operating in the Black Sea, and in April the United States cancelled the deployment of two warships to the area.

Ties between London and Moscow have been on ice since the 2018 poisoning with a Soviet-developed nerve agent known as Novichok of ex-double agent Sergei Skripal, a mole who betrayed hundreds of Russian agents to Britain’s MI6 foreign spy service.

The British destroyer visited the Ukrainian port of Odessa this week, where an agreement was signed for Britain to help upgrade Ukraine’s navy.

Russia said it had ventured as far as 2 miles into Russian waters near Cape Fiolent, a landmark on Crimea’s southern coast near the port of Sevastopol, headquarters of the Russian Navy’s Black Sea fleet.

Britain’s BBC released footage from the ship showing a Russian coast guard warning that he would shoot if the British ship did not change course.

“If you don’t change the course, I’ll fire,” a heavily accented Russian voice said in English to the British ship. The BBC said shots were fired and that as many as 20 Russian aircraft were “buzzing” the British ship.

Britain said the shots were part of a Russian gunnery exercise. Russia released footage filmed from a Russian SU-24 bomber flying close to the British ship.

“These aircraft posed no immediate threat to HMS Defender, but some of these maneuvers were neither safe nor professional,” Britain’s Mr. Wallace said.