This website requires the use of Javascript to function correctly. Performance and usage will suffer if it remains disabled.
How to Enable Javascript
Last Pro-democracy Hong Kong Newspaper Shut Down 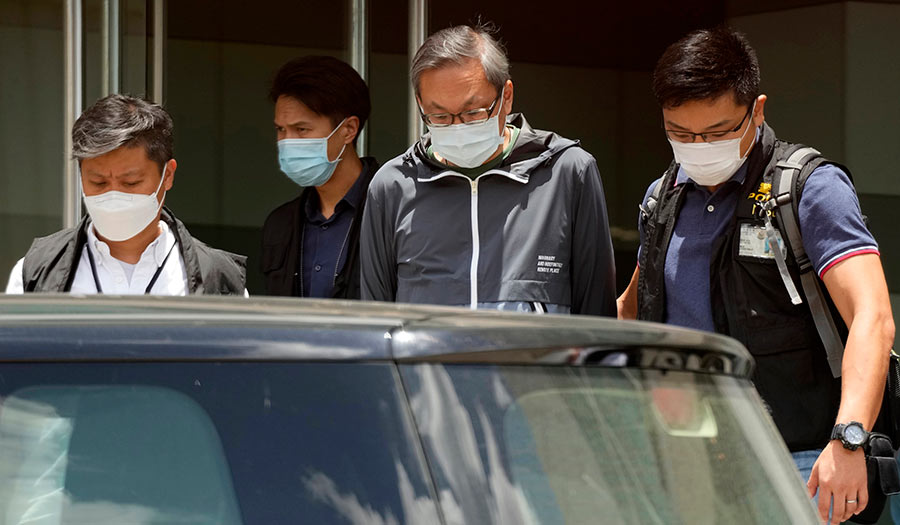 HONG KONG (AP) – Hong Kong’s sole remaining pro-democracy newspaper will publish its last edition Thursday, forced to shut down after five editors and executives were arrested and millions of dollars in its assets were frozen as part of China’s increasing crackdown on dissent in the semi-autonomous city.

The board of directors of Apple Daily parent company Next Media said in a statement Wednesday that the print and online editions will cease due to “the current circumstances prevailing in Hong Kong.”

The silencing of a prominent pro-democracy voice is the latest sign of China’s determination to exert greater control over the city long known for its freedoms after huge antigovernment protests there in 2019 shook the government. Since then, Beijing has imposed a strict national security law—used in the arrests of the newspaper employees—and revamped Hong Kong’s election laws to keep opposition voices out of the legislature.

Apple Daily was founded by tycoon Jimmy Lai in 1995—just two years before Britain handed Hong Kong back to China—and initially was a tabloid known for its celebrity gossip. But Mr. Lai had also always portrayed the paper as an advocate of democratic values and said it should “shine a light on snakes, insects, mice and ants in the dark,” according to the paper.

It grew into an outspoken voice for defending Hong Kong’s freedoms not found on mainland China, and in recent years has often criticized the Chinese and Hong Kong governments for limiting those freedoms and reneging on a promise to protect them for 50 years after the city’s handover to China. While pro-democracy media outlets still exist online, it is the only print newspaper left of its kind in the city.

“Even if the ending is not what we want, even if it’s difficult to let go, we need to continue living and keep the determination we have shared with Hong Kong people that has remained unchanged over 26 years,” Apple Daily wrote.

The newspaper said it plans to print 1 million copies for the final edition Thursday, up from the usual 80,000.

The paper’s announcement coincided with the start of the city’s first trial under the year-old national security law that is being closely watched as a barometer of how strictly the courts will interpret the legislation.

The widely expected move to close Apple Daily followed last week’s arrests and crucially the freezing of $2.3 million of the paper’s assets. Its board of directors wrote a few days ago to ask Hong Kong’s security bureau to release some of its funds so the company could pay wages—but it is not clear if it got a response. The paper also said it made the decision to close out of concern for its employees’ safety.

The editors and executives were detained on suspicion of colluding with foreigners to endanger national security. Police cited more than 30 articles published by the paper as evidence of an alleged conspiracy to encourage foreign nations to impose sanctions on Hong Kong and China. It was the first time the national security law had been used against journalists for something they had published.