This website requires the use of Javascript to function correctly. Performance and usage will suffer if it remains disabled.
How to Enable Javascript
Weather Service: Suburban Chicago Tornado Had 140 mph Winds 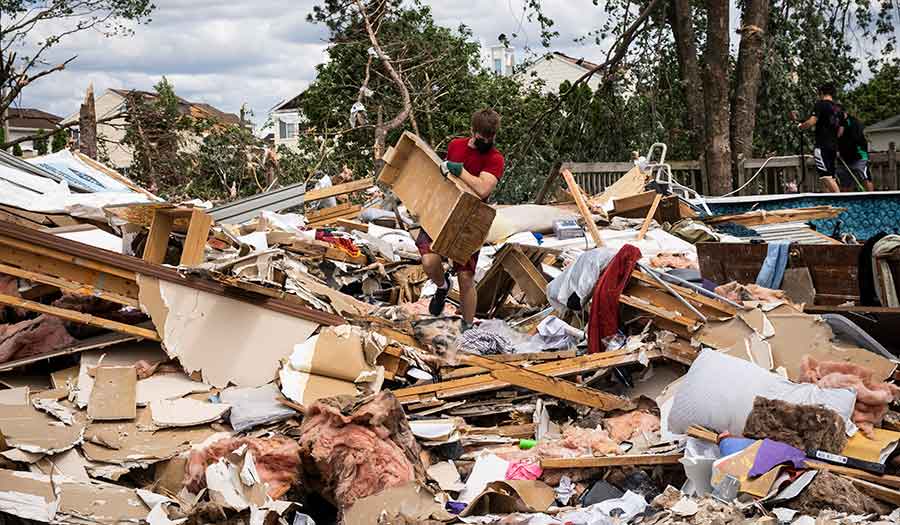 Ashlee Rezin Garcia/Sun-Times/Chicago Sun-Times via AP
Dozens of volunteers help clean up a demolished home on Princeton Circle near Ranchview Drive in Naperville, Illinois, after a tornado ripped through the suburbs overnight (June 21, 2021).

A weather service team that surveyed the aftermath of Sunday night’s storm found that, based on Monday’s preliminary findings, the tornado was an EF3 on the Enhanced Fujita scale when it cut a path through parts of Naperville, Woodridge, Darien and Burr Ridge, and that it launched debris to a height of nearly 20,000 feet.

The weather service planned to continue surveying that area to determine the precise path, width and length of the storm’s trail of destruction, said Jake Petr, a meteorologist at the service’s Romeoville office.

“So overall, we’re still solidifying the findings for the whole event of this tornado,” he said Tuesday.

Woodridge Mayor Gina Cunningham said Tuesday that the tornado dealt significant damage to more than 100 homes and lesser damage to hundreds of others in her village of roughly 33,000 people.

She said building inspectors were going street by street to produce damage estimates for a possible request for a state disaster declaration and that a decision on that would be made soon.

“Chain saws are pretty much on every street,” she said during a news conference as chain saws roared in the distance.

State Senator John Curran, a Republican from Woodridge, said the community faces a long recovery but that he is heartened by the number of residents helping their neighbors during the cleanup, calling their spirit “remarkable.”

The weather service said Monday that an EF0 tornado with peak winds of 85 mph hit another area of suburban Chicago on Sunday, causing damage that stretched about 3 miles from Plainfield to Romeoville and mostly damaging trees.

In southeastern Michigan, an EF1 tornado was confirmed in Lenawee County’s in Riga Township. It had peak winds of 90 mph, was on the ground for about 3 miles and damaged at least five homes, according to a weather service summary of the storm.