This website requires the use of Javascript to function correctly. Performance and usage will suffer if it remains disabled.
How to Enable Javascript
Why Romanian Migrants from Europe Are Taking Rafts from Mexico to Enter the U.S.

Why Romanian Migrants from Europe Are Taking Rafts from Mexico to Enter the U.S. 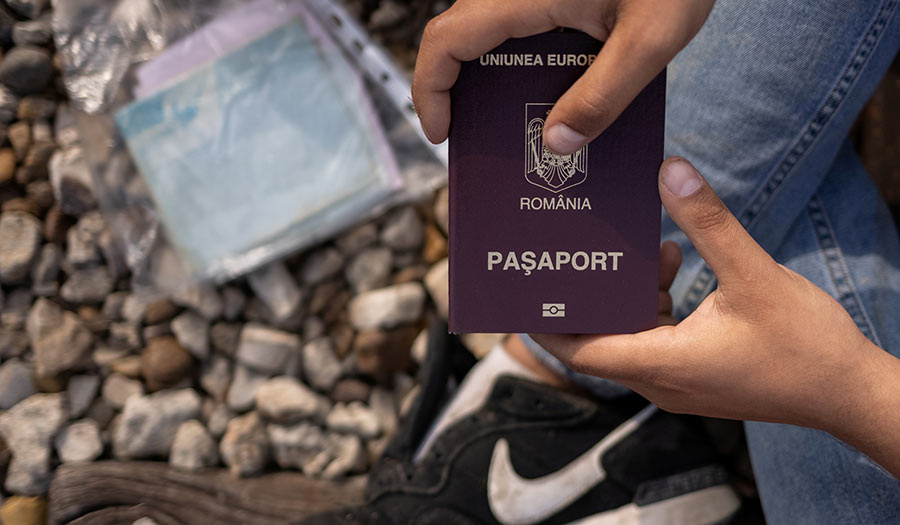 Reuters/Adrees Latif
An asylum-seeking migrant from Romania holds his passport after crossing the Rio Grande into the United States from Mexico on a raft, in La Joya, Texas (May 5, 2021).

ROMA, Texas (Reuters) – Among the hundreds of Central American migrants crossing the Rio Grande river daily on rafts from Mexico to Texas, dozens stood out on a recent day. They were generally taller and some wore skirts, stylish shoes and tracksuits, while many of the other migrants wore T-shirts, pants and jeans.

U.S. border patrol officers who apprehended them near the river tried to speak to them in Spanish. There was a pause as some of the border crossers explained in broken English that they were Romanians, a Reuters photographer said.

Scores of Romanians who are part of the Roma ethnic minority have crossed the U.S.-Mexico border in south Texas in recent weeks to seek asylum, highlighting the far-flung origins of some of the migrants who have contributed to border arrests in recent months reaching a 20-year high.

Reuters witnessed large groups of these migrants crossing the Rio Grande on rafts on multiple occasions in May. The migrants Reuters spoke to said they were fleeing racism in Romania and wanted to seek asylum in the United States.

The Roma are Europe’s largest ethnic minority and have a long history of social exclusion and discrimination.

Over three weeks, a Reuters photographer saw nearly 200 Romanians crossing at different points along the Texas border, many extended family groups of 10-15 people.

Border patrol agents have apprehended 2,217 Romanians so far in fiscal year 2021, more than the 266 caught in fiscal 2020 and the 289 in fiscal 2019, according to data provided by the U.S. Customs and Border Protection agency.

More than 2,000 Romanians crossed the southwest border in fiscal year 2016. Current arrivals are on pace to be the highest since 2007, the earliest year for which citizenship arrival data is available.

Margareta Matache, director of the Roma Program at the FXB Center for Health and Human Rights at Harvard University, said many Roma fled Romania to escape persecution and dire economic circumstances, partly fueled by the COVID-19 pandemic.

“Currently, U.S. policies and policy proposals offer hope for more humane and just policies, including for immigrants,” Ms. Matache said. “They [Roma] are looking for a better life in a place where they are not exposed to violence, discrimination, and disrespect.”

The Romanian government said it had not been notified by the United States of any detained citizens but said its embassy officials have contacted local authorities after reading media reports.

The European Union Agency for Fundamental Rights found in a 2016 survey of nearly 8,000 Roma people in nine European countries that about 80 percent of the Roma population was living below the national poverty line.

There is no official population count for Roma people, who reside in many countries and have long faced prejudice in Europe and worldwide. Most live in eastern Europe, particularly in Romania, Bulgaria, Slovakia and Hungary.

According to Romanian media reports, many Romanian migrants fly from Paris to Mexico City as tourists as they do not need visas to enter Mexico. Then smugglers take them by bus to the U.S. border where they cross the Rio Grande by boat or raft.