This website requires the use of Javascript to function correctly. Performance and usage will suffer if it remains disabled.
How to Enable Javascript
Forest Rangers Struggle to Prevent Poaching amid Lockdowns 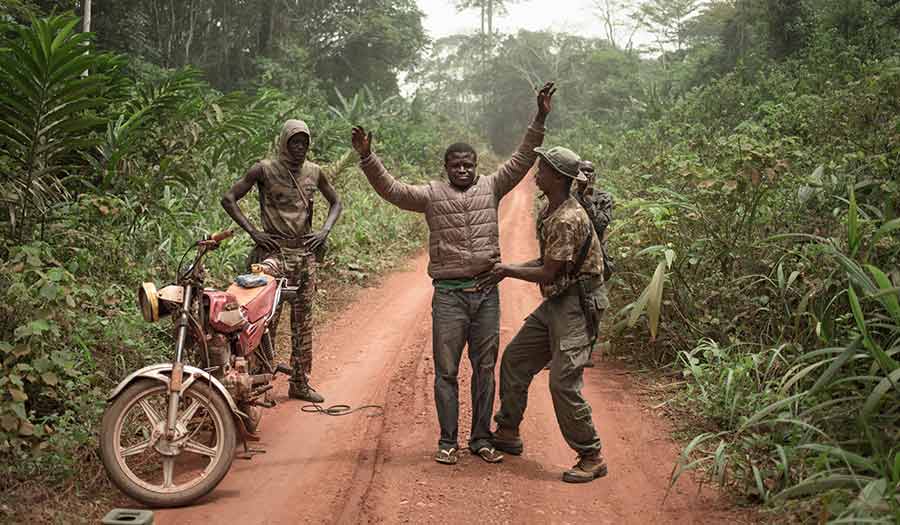 Florent Vergnes/AFP via Getty Images
The rangers of a dog squad search a motorcycle taxi for pangolin scales or hunting ammunition in Dzanga-Sangha Park, in Bayanga, Central African Republic (March 14, 2020). African pangolins in the Central African Republic have been protected by law since 2019. Poached by the local population, pangolin meat is consumed by hunters and the scales are sent to the Chinese pharmacopoeia market. One jar of pangolin scales sells in Bayanga for about 55 USD.

SINGAPORE (Reuters) – Ranger Atul Deokar’s walkie-talkie crackled one October night. He heard his colleagues’ panicked voices shouting for back-up: They had been surrounded by 70 villagers armed with axes and sharpened sticks and demanding to hunt in India’s protected Pench Tiger Reserve.

The rangers fired into the air after the villagers attempted to set fire to the hut in which the patrol were holed up—ending a 30-minute standoff that reflects the pressure that forests and wildlife have come under in Asia, Africa and Latin America as a result of the pandemic.

Forest officials on all three continents told Reuters similar stories of facing off with poachers, as the economic fallout from coronavirus lockdowns left many struggling for goods to barter, firewood and food.

While there are no comprehensive data to show where forest poaching has risen most, many countries “have noted indeed an increase in wildlife and forestry crime during the pandemic,” said Interpol’s Rory Corcoran, assistant director of the illicit markets department.

“The poached wildlife is mainly for local consumption,” he said.

That pressure on wildlife is likely to continue, experts say, even as economies start a tentative recovery. Sub-Saharan Africa is on track to record the world’s slowest growth this year, according to the IMF, while COVID surges are expected to slow a return to growth in Latin America and Asia.

In India, where the economy was expected to contract by 7.7 percent in the 2020-2021 fiscal year, the pandemic led to major unemployment and disruption to food distribution. The forest ranger, Mr. Deokar, said he has witnessed the fallout firsthand.

“All those jobless young people, they have idle hands now, and they are completely dependent on the forest for anything they can find to eat or sell for money,” Mr. Deokar told Reuters by phone.

“This makes our job more difficult.”

With worldwide pandemic lockdowns, national parks have been empty of camera-clicking tourists. And rangers say they are seeing more animals out in the open, venturing back into areas normally trafficked by day-tripping jeeps on sight-seeing excursions.

But they are also seeing local residents and poachers increasingly venture into protected parks: At least 15 rhinos were killed in southern Africa. Deer and at least one tiger were hunted in India. The reported spike in illegal activity was particularly bad in Latin America.

In Costa Rica, ranger Leonel Delgado described a game of cat and mouse with people hunting everything from rodents to deer for meat, to jaguars as trophies or due to fears the cats will attack livestock.

“The hunters know that the park rangers…are going to patrol areas they normally go to, so they look for other places to get in,” Mr. Delgado said of the Central American country’s Braulio Carrillo National Park.

“That forces you to widen the range of areas you have to patrol.”

In several Latin American, Asian and southern African countries, rangers were put on double-duty or asked to cover twice as much ground. In other places, rangers were unable to patrol all of their protected park areas, according to a survey by the World Wide Fund for Nature (WWF).

In Zimbabwe, with the temporary closure of the Stanley and Livingstone Private Game Reserve, staff once busy monitoring wildlife and guiding tourism activities have shifted their focus to boundary patrols, and undergone training to learn how to fend off trespassers. This has included taking on night patrols, learning defense techniques in combat situations, and more target practice with weapons.

“We now need to maintain the highest level of security presence,” Picket Chabwedzeka, a manager at the reserve, told Reuters by email.

These stories of forests coming under pressure during the pandemic do not match global data on wildlife seizures at airports, seaports and in raids.

In fact, worldwide seizures of the three most heavily trafficked animal parts—ivory, rhino horn and pangolin scales—dropped by 50 percent in 2020, compared with the previous year, and were 12 percent lower than the previous five-year average, according to data collected by the Center for Advanced Defense Studies.

But conservation experts say there is good reason for that. With air travel disruptions eliminating traditional routes, traffickers were likely using land or shipping routes instead, or storing animal parts until supply routes are re-established or black market prices rise.

“The supply chain disruption does not mean the trade in these commodities has stopped,” said Olivia Swaak-Goldman, executive director of the international Wildlife Justice Commission, which works with law enforcement to tackle wildlife trafficking.

Even in a normal year, she said the seizures by authorities are just the “tip of the iceberg.”

“Traffickers see these [animal products] as an investment, and they are stockpiling, waiting for prices to recover,” she said.

Experts fear conservation budgets—especially those funded by tourism—may be cut or curtailed as governments grapple with economic recovery.

Less than 1 percent of government recovery packages are currently aimed at protecting nature, according to the Bangkok-based Freeland Foundation, an anti-trafficking organization. That is worrying, as viruses like coronavirus are more likely to jump from animals to humans as forests vanish.

“If the world wants to prevent future pandemics, we need to stay focused on minimizing local and international poaching and trafficking,” said Steven Galster, the group’s founder.

More than half of India’s 28 states have already seen their forest conservation and restoration budgets slashed.

Parks linked to the Frankfurt Zoological Society in at least six Latin American countries, meanwhile, were forced to lay off staff after budgets were cut by an average 20 percent. And at least 11 African countries reported funding cuts that affected wildlife research, monitoring activities and trafficking investigations, according to a March survey by the International Union for Conservation of Nature.

“There is no breathing space for Mother Nature here.”