This website requires the use of Javascript to function correctly. Performance and usage will suffer if it remains disabled.
How to Enable Javascript
U.S. Hits China for Repressing Religious Freedom 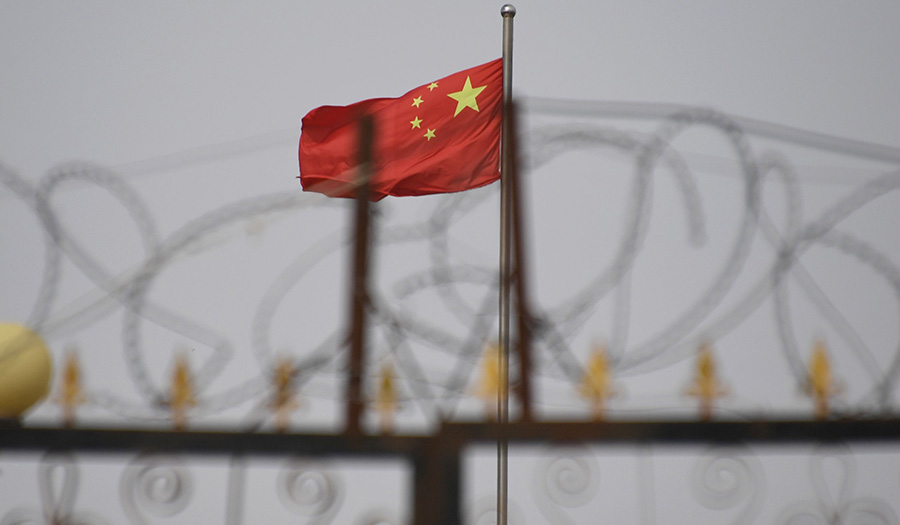 Greg Baker/AFP via Getty Images
The Chinese flag flies behind razor wire at a housing compound in Yangisar, in China’s western Xinjiang region (June 4, 2019). As many as one million ethnic Uyghurs and other mostly Muslim minorities are believed to be held in a network of internment camps in Xinjiang, including high-security re-education camps China calls “vocational education centers” where minorities are detained.

WASHINGTON (AP) – The Biden administration took aim at China and a number of other countries for repressing religious freedom as it forges ahead with its aim of restoring human rights as a primary focus of American foreign policy.

The condemnation was similar to that lodged by the Trump administration and reflected continuity in the U.S. position that China’s crackdown on Muslims and other religious minorities in western Xinjiang constitutes “genocide.” Yet, a senior official said religious freedom is just one element in the administration’s broader human rights strategy.

Much as his predecessor did, Secretary of State Antony Blinken used the release of the State Department’s annual International Religious Freedom Report to lambaste China for severe restrictions on its citizens’ ability to worship freely. He also announced a travel ban on a former senior Chinese official the U.S. accuses of persecuting members of the Falun Gong religious sect.

“China broadly criminalizes religious expression and continues to commit crimes against humanity and genocide against Muslim Uyghurs and members of other religious and ethnic minority groups,” Mr. Blinken told reporters as he unveiled the report for the calendar year 2020.

The report itself said Christians, Muslims, Tibetan Buddhists and Falun Gong practitioners in China all suffer from “severe societal discrimination in employment, housing, and business opportunities.”

While Mr. Blinken did not spare China from criticism, his remarks were less extensive than those of former Secretary of State Mike Pompeo during previous religious freedom events. Mr. Pompeo was particularly direct in his condemnation of China’s treatment of the Uyghurs and other religious minorities, often devoting entire speeches to the subject.

In his comments, Mr. Blinken also lashed out at abuses of religious freedom in Iran, Myanmar, Russia, Nigeria and Saudi Arabia, all of which were identified in the report as offenders.

Daniel Nadel, a top official in the State Department’s Office of International Religious Freedom, said Wednesday’s report did not represent a shift in the way the U.S. views human rights but rather a recognition that religious rights are equally as important as political rights.

“It’s not a departure, certainly, from any prior concept, but it’s a clarification, because Secretary Pompeo did express his view that there was perhaps a hierarchy of rights concept. And that’s a view that this administration does depart from,” Mr. Nadel said.