This website requires the use of Javascript to function correctly. Performance and usage will suffer if it remains disabled.
How to Enable Javascript
Myanmar’s Anti-Junta Unity Government Forms ‘Defense Force’ 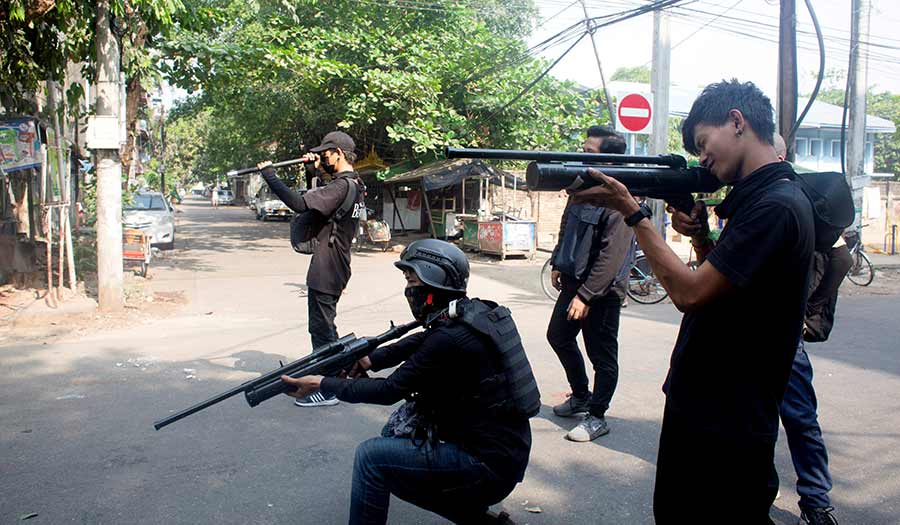 Reuters – Myanmar’s National Unity Government (NUG), set up by opponents of army rule, said on Wednesday it had formed a “people’s defense force” to protect its supporters from military attacks and violence instigated by the junta.

Since the military seized power and ousted an elected government led by Nobel laureate Aung San Suu Kyi on February 1, Myanmar has seen daily protests and a surge of violence with security forces killing hundreds of civilians.

The NUG said the new force was a precursor to a Federal Union Army and that it had a responsibility to end decades-old civil wars and deal with “military attacks and violence” by the ruling State Administration Council (SAC) against its people.

The unity government, established last month by an array of groups opposed to the junta, among them ethnic minority militias, has pledged to end violence, restore democracy and build a “federal democratic union.”

Among the NUG’s supporters is the Karen National Union (KNU), the country’s oldest rebel force, whose Brigade 5 on Wednesday told the Karen Information Center media group its fighters had killed 194 government troops since hostilities resumed in late March.

A spokesman for the junta did not answer a call seeking comment.

The military ruled Myanmar from 1962 to 2011, before launching a tentative transition to democracy and sweeping economic reforms.

The coup halted that, angering many people unwilling to put up with another phase of military rule.

Myanmar’s well-equipped army, known as the Tatmadaw, is one of the region’s most battle-hardened forces.

Despite that, its opponents have in some places been using crude weapons to fight troops, while others have sought training with ethnic armies who have battled the military since independence in 1948 from remote border areas.

A young activist in Mandalay on Wednesday told Reuters he was planning to join the federal army to “help fight against the Tatmadaw” and that networks of activists had mobilized to train in the jungles.

There have been reports of some of those being arrested and imprisoned by the military, including on April 30 in Kayah state in eastern Myanmar, a family member of one of those detained told Reuters on Wednesday.

Myanmar has in recent weeks seen small blasts in cities and towns, some targeting government offices and military facilities.

There have been no claims of responsibility, but the military has blamed people bent on destabilizing the country.

State media on Wednesday said five people killed in an explosion this week, including a former lawmaker for Ms. Suu Kyi’s party, had been building a bomb, and wire, batteries and a damaged phone were found at the scene.

Dr. Sasa, a minister and spokesman for the NUG, on Wednesday said the explosion in the Bago region was the work of the military leadership, who would face justice in international courts.

“The killings and crimes against humanity were well-planned and well-coordinated by the highest level of the military generals in Myanmar,” he told Reuters.

A woman was killed while in a vehicle by a stray bullet in the second-biggest city Mandalay on Wednesday, after soldiers opened fire on a motorcycle rider who ignored orders to stop, local news organization Khit Thit reported.

The Assistance Association for Political Prisoners (AAPP) rights monitoring group says security forces have killed 769 people since the coup. The junta disputes that but has acknowledged about a third of that number of fatalities.

Reuters is unable to verify casualties because of curbs on media. Many journalists are among thousands of people detained.

The independent Tachileik news agency, based in Shan State in the northeast, said on Facebook its license had been revoked, the latest of eight such news outlets shut down by authorities.

With mobile internet access largely cut off to try to thwart protests, Myanmar has increasingly appeared headed back to a state of isolation under the last era of military rule.