This website requires the use of Javascript to function correctly. Performance and usage will suffer if it remains disabled.
How to Enable Javascript
As Pandemic Ebbs, an Old Fear is New Again: Mass Shootings 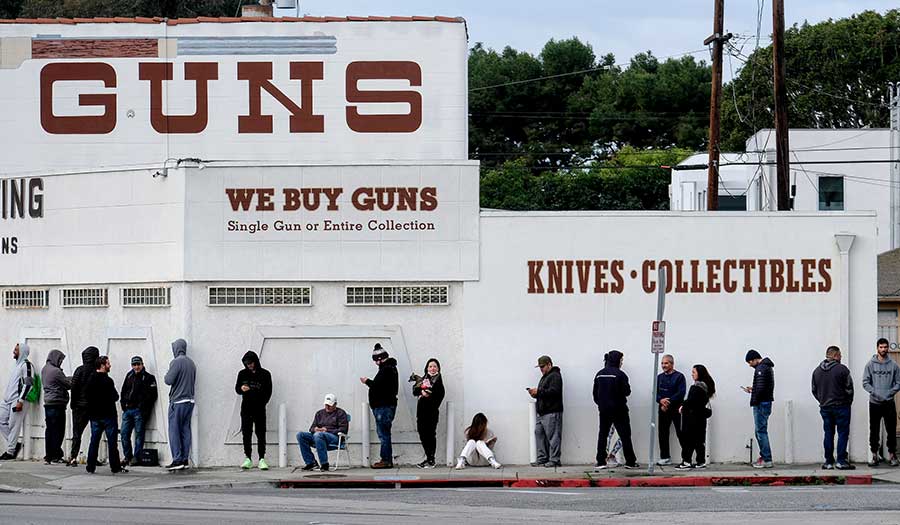 PORTLAND, Oregon (AP) – Brianne Smith was overjoyed to get an e-mail telling her to schedule a second dose of the COVID-19 vaccine. Hours later, her relief was replaced by dread: a phone alert—another mass public shooting.

Before the pandemic, she would scan for the nearest exit in public places and routinely practiced active shooter drills at the company where she works. But after a year at home in the pandemic, those anxieties had faded. Until now.

“I haven’t been living in fear with COVID because I’m able to make educated decisions to keep myself safe,” says Ms. Smith, who lives in St. Louis, Missouri. “But there’s no way I can make an educated decision about what to do to avoid a mass shooting. I’ve been at home for a year and I’m not as practiced at coping with that fear as I used to be.”

After a year of pandemic lockdowns, public mass shootings are back. For many, the fear of contracting an invisible virus is suddenly compounded by the forgotten yet more familiar fear of getting caught in a random act of violence.

A database compiled by The Associated Press, USA Today and Northeastern University that tracks mass killings—defined as four or more dead, not including the shooter—showed just two public mass shootings in 2020. Since January 1, there have been at least 11.

Yet while mass shootings dropped out of the headlines, the guns never went away. Instead, even as the U.S. inches toward a post-pandemic future, guns and gun violence feel more embedded in the American psyche than ever before. The fear and isolation of the past year have worked their way into every aspect of the U.S. conversation on firearms, from gun ownership to inner-city violence to the erosion of faith in common institutions meant to keep Americans safe.

More than 21 million people completed a background check to buy a gun last year, shattering all previous records, and a survey found that 40 percent identified as new gun owners—many of whom belong to demographics not normally associated with firearms, according to the National Shooting Sports Foundation, a firearm industry trade association. Purchases of guns by Black Americans increased 58 percent over 2019 and sales to Hispanics went up 46 percent, the group says.

Gun advocates tie this increase to pandemic anxiety and a loss of faith in the ability of police officers and government institutions at all levels to keep the public safe amid what at first was a little-understood, invisible menace. The eruption of sustained racial injustice protests after the death of George Floyd and calls to reduce police funding also contributed to more interest in firearms.

One of those buyers was Charles Blain, who purchased a Glock 43 handgun and a shotgun for the first time last year. Mr. Blain says “pandemic-related unemployment crime” and repeated calls over the past year to release hundreds of jail inmates because of soaring COVID-19 infections pushed him to buy.

“I was always gun-friendly, but never really felt the need to own one myself,” says Mr. Blain, who founded Urban Reform, which helps underserved communities get involved in policy decisions that impact them.

The dramatic rise in firearms ownership represents a “tectonic shift in the conversation on guns,” says Mark Oliva, the foundation’s director of public affairs.

“For these people, gun ownership and gun control was until now a rhetorical debate. It was something you could discuss at a cocktail hour, but they had no skin [in] the game—and then they bought guns,” he said.

Gun rights advocates feel good about what this could mean for gun policy, with a broader swath of society seeing themselves when they hear about gun control efforts.

At the same time, gun-related homicides in midsized and big cities in America have skyrocketed during coronavirus, and criminologists believe the pandemic and the socioeconomic loss in many communities are factors driving that trend.

“We’ve been trying to sound the alarm, but the No. 1 priority is COVID because nothing happens until COVID is fixed,” says Alex Piquero, a criminologist and professor at the University of Miami who conducted research for the Council on Criminal Justice’s COVID-19 commission. “This is the long-term symptom of the disease and...the long-term mental health effects of this are going to be staggering.”

Last year, there were more homicides than in any of the previous 26 years. This year, the city had tallied more than 340 shootings by late April—an average of about three a day—and was on track to blow past last year’s homicide record. The shootings are mostly impacting the city’s lower-income areas where coronavirus has taken a heavy toll.

In one instance, a pastor involved in a coalition to address the violence had to hurry off a Zoom meeting about the crisis because gunfire erupted nearby. In March, a 14-year-old boy was seriously wounded by gunfire while he stood with friends near a soccer field.

“It’s the way that we all feel as people who have careers and homes and jobs and how emotionally unstable we’ve felt over this past year. Now imagine all that in people who are in hopeless situations,” says Sam Thompson, who started a neighborhood group last summer to try to find solutions.

More Politics Than Ever

When it comes to the gun control debate, Americans seem “more entrenched than ever,” and those divisions are playing out in state legislatures around the nation, says David Kopel, a law professor at the University of Denver and research director at the Independence Institute, a think tank in Colorado that favors gun rights.

After a year of isolation, loss and stress, the nation is akin to a patient in an acute mental health crisis—and there is a growing chasm of opinion on whether guns are part of the remedy, or a symptom of the disease.

In conservative America, mask mandates and economic shutdowns have been lumped together with gun control legislation as examples of vast government overreach. Liberal legislatures, meanwhile, have moved to lessen gun access and tighten rules to prevent more mass shootings as a more heavily armed nation opens up.

“When you’re getting told, ‘Look, the cops just can’t be there because they’ve all got COVID’ or, depending on the state, you may not be able to buy a gun because the licensing departments are getting overwhelmed—all those things came into play,” Mr. Kopel said. “You now have state [gun] laws that are directly pandemic-related.”

In North Carolina, for example, lawmakers are considering a bill to remove a century-old requirement for a local sheriff’s permit to buy a pistol, a policy that came under scrutiny when one sheriff briefly stopped handling the paperwork because of COVID-19. In other conservative states, lawmakers have passed or are debating pandemic-inspired laws that do everything from strengthen a ban on using the government’s emergency powers to confiscate firearms to allowing gun owners to carry a concealed firearm without a permit.

In Oregon, armed protesters angry that the state Capitol was closed to the public due to COVID-19 tried to storm the building late last year in a foreshadowing of what happened on January 6 at the U.S. Capitol. In response, Democrats are using their supermajority to advance a bill that would mandate safe storage for firearms and make it illegal to bring a gun into the state Capitol.

In Colorado, a gun storage bill was recently signed into law and in Massachusetts, lawmakers are considering a ban on the manufacture of assault weapons in that state—a bill introduced after the recent spate of mass shootings.

If recent months are any indication, for years to come the debate about guns will hold the echoes of America’s shared pandemic trauma and the seismic shifts it brought to its notions of safety, freedom and well-being.

Yet in one area, some see the potential to reduce the polarization around guns: the increasing focus of public health in the national conversation. The idea that gun violence is a public health threat—just like the coronavirus and the pandemic it caused—could transform the way Americans talk about guns.

“How can we learn to live with the guns, whereas right now we’re dying with them?” asked David Hemenway, a professor of health policy at Harvard University. “The public health approach in a one-sentence description is, ‘Let’s make it really easy to be healthy and really difficult to get sick and injured.’ We have to agree we have a big problem and it’s a societal problem. Then, there are so many things we can talk about.”