This website requires the use of Javascript to function correctly. Performance and usage will suffer if it remains disabled.
How to Enable Javascript
Russia Arrests Over 5,100 at Protests Backing Kremlin Critic Navalny 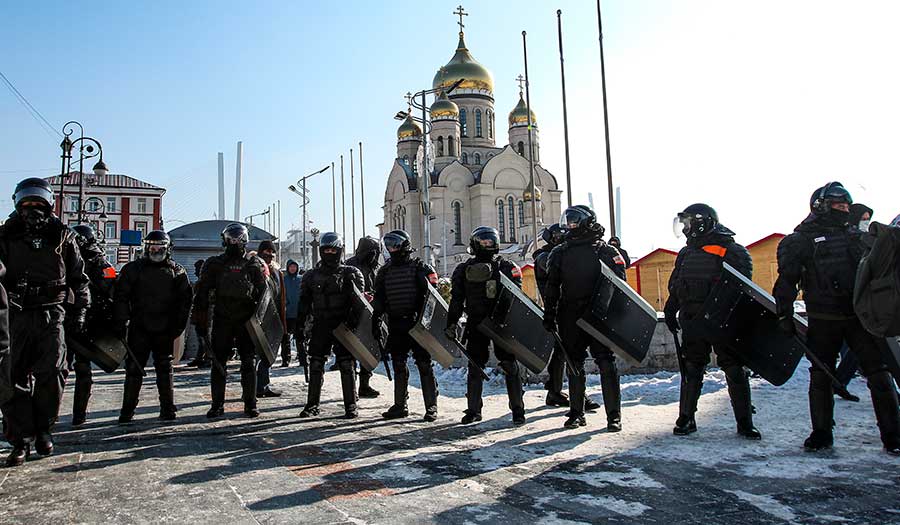 MOSCOW (AP) – Chanting slogans against President Vladimir Putin, tens of thousands took to the streets Sunday across Russia to demand the release of jailed opposition leader Alexei Navalny, keeping up nationwide protests that have rattled the Kremlin. More than 5,100 people were detained by police, according to a monitoring group, and some were beaten.

The massive protests came despite efforts by Russian authorities to stem the tide of demonstrations after tens of thousands rallied across the country last weekend in the largest, most widespread show of discontent that Russia had seen in years. Despite threats of jail terms, warnings to social media groups and tight police cordons, the protests again engulfed cities across Russia’s 11 time zones on Sunday.

In a massive show of force, police imposed a sweeping security lockdown in the heart of Moscow, sealing off streets to pedestrians near the Kremlin, closing metro stations and deploying hundreds of riot police as snow fell.

Mr. Navalny’s team quickly called another protest in Moscow for Tuesday, when he is set to face a court hearing that could send him to prison for years.

The 44-year-old Mr. Navalny, an anti-corruption investigator who is Mr. Putin’s best-known critic, was arrested on January 17 upon returning from Germany, where he spent five months recovering from nerve-agent poisoning that he blames on the Kremlin. Russian authorities have rejected the accusations. He was arrested for allegedly violating his parole conditions by not reporting for meetings with law enforcement when he was recuperating in Germany.

Some of the biggest rallies were held in Novosibirsk and Krasnoyarsk in eastern Siberia and Yekaterinburg in the Urals.

“I do not want my grandchildren to live in such a country,” said 55-year-old Vyacheslav Vorobyov, who turned out for a rally in Yekaterinburg. “I want them to live in a free country.”

Russia has seen extensive corruption during Mr. Putin’s time in office while poverty has remained widespread.

“All of us feel pinched financially, so people who take to the streets today feel angry,” said Vladimir Perminov who protested in Moscow. “The government’s rotation is necessary.”