This website requires the use of Javascript to function correctly. Performance and usage will suffer if it remains disabled.
How to Enable Javascript
Death Toll Rises in Central America After Hurricane Iota 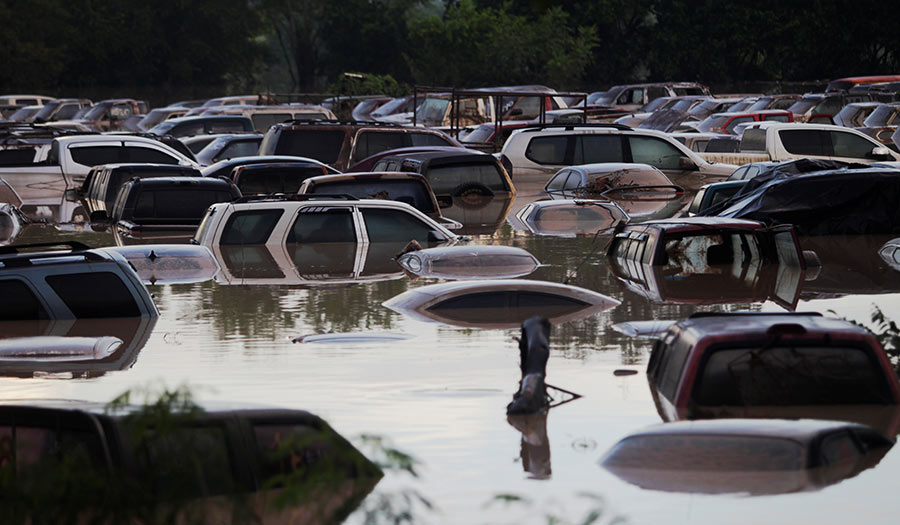 Reuters/Jorge Cabrera
Vehicles are submerged at a plot flooded by the Chamelecon River due to heavy rain caused by Hurricane Iota, in La Lima, Honduras (Nov. 19, 2020).

TEGUCIGALPA/MEXICO CITY (Reuters) – Authorities in Central America recovered more bodies on Thursday from landslides triggered by Hurricane Iota, which battered the impoverished region this week, the second deadly storm to roar through this month.

The number of reported deaths rose to more than 40 across Central America and Colombia, and the toll is expected to rise as rescue workers reach isolated communities. Most of the deaths occurred in Nicaragua and Honduras.

“We are in a situation of great calamity and we need the world to help us rebuild our country,” he told a news conference.

The strongest storm on record to hit Nicaragua, Iota struck the coast late on Monday as a Category 4 hurricane. It inundated low-lying areas still reeling from the impact two weeks ago of Eta, another major hurricane that killed dozens of people in the region.

The destruction caused by the unprecedented 2020 hurricane season in Central America could spur migration to the United States from a region already coping with insecurity and an economic crisis triggered by novel coronavirus lockdowns, aid officials say.

More details from the toll that Iota inflicted came to light on Thursday.

Honduran authorities said eight members of two families, including four children, were killed when a landslide buried their homes in a village in a mountainous region populated by indigenous Lencas near the border with El Salvador.

Those deaths raised the Honduras toll to 14.

In Nicaragua, where at least 21 people have been confirmed dead, rescue efforts were focused on a landslide in the north of the country that killed eight people, with more missing.

While Iota largely dissipated over El Salvador on Wednesday, authorities struggled to cope with the fallout from days of heavy rain.

Some 160,000 Nicaraguans and 74,000 Hondurans have been forced to flee to shelters, where aid workers worry the chaotic conditions could lead fresh outbreaks of the novel coronavirus.

Giovanni Bassu, the regional representative for Central America for the UN refugee agency told Reuters he expected to see the compounding hardships driving more migration out of northern Central America in coming months.

“One storm after another is a very sad metaphor for the much broader phenomenon,” Mr. Bassu said.