This website requires the use of Javascript to function correctly. Performance and usage will suffer if it remains disabled.
How to Enable Javascript
Category 5 Hurricane Iota Heads Toward Already Battered Central America 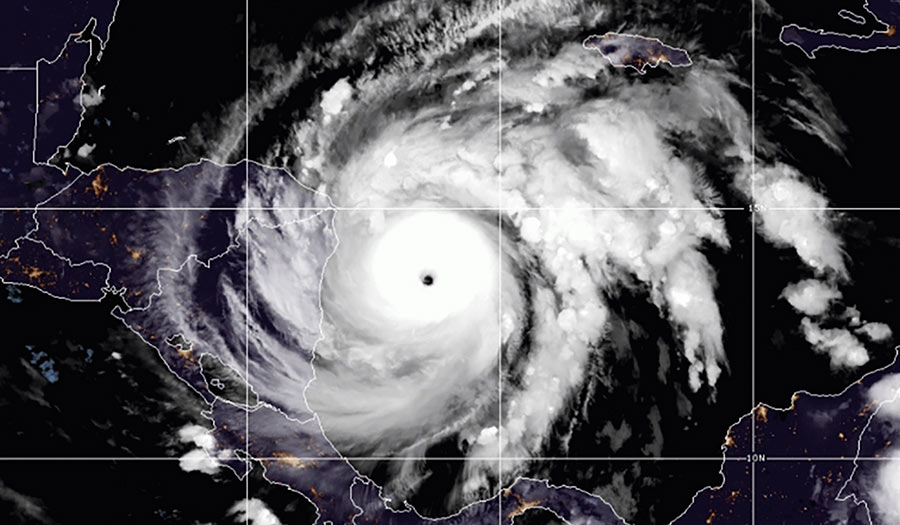 NOAA via AP
A satellite image of Hurricane Iota nearing the Central American coast on the Atlantic Ocean (Nov. 16, 2020).

MANAGUA, Nicaragua (AP) – Hurricane Iota rapidly strengthened Monday into a Category 5 storm that is likely to bring catastrophic damage to the same part of Central America already battered by a powerful Hurricane Eta less than two weeks ago.

Iota has intensified over the western Caribbean on approach to Nicaragua and Honduras. U.S. Air Force hurricane hunters flew into Iota’s core and measured maximum sustained winds of 160 mph, the U.S. National Hurricane Center said. It was centered about 100 miles east-southeast of Puerto Cabezas, Nicaragua and moving westward at 9 mph.

Authorities warned that Iota would probably come ashore over areas where Eta’s torrential rains saturated the soil, leaving it prone to new landslides and floods, and that the storm surge could reach a shocking 12 to 18 feet above normal tides.

Evacuations were being conducted from low-lying areas in Nicaragua and Honduras near their shared border, which appeared to be Iota’s likely landfall. Winds and rain were already being felt on the Nicaraguan coast Sunday night.

Iota is the record 30th named storm of this year’s extraordinarily busy Atlantic hurricane season. It is also the ninth storm to rapidly intensify this season.

Wind and rain were beginning to be felt Sunday night in Bilwi, a coastal Nicaraguan city where people crowded markets and hardware stores during the day in search of plastic sheeting, nails and other materials to reinforce their homes, just as they did when Hurricane Eta hit on November 3.

Several residents of Bilwi expressed concern that their homes would not stand up to Iota, so soon after Eta. Local television showed people being evacuated in wooden boats, carrying young children as well as dogs and chickens.

Eta already wreaked havoc. It hit Nicaragua as a Category 4 hurricane, killing at least 120 people as torrential rains caused flash floods and mudslides in parts of Central America and Mexico. Then it meandered across Cuba, the Florida Keys and around the Gulf of Mexico before slogging ashore again near Cedar Key, Florida, and dashing across Florida and the Carolinas.

Iota was forecast to drop 8 to 16 inches of rain in northern Nicaragua, Honduras, Guatemala and southern Belize, with as much as 30 inches in isolated spots. Costa Rica and Panama could also experience heavy rain and possible flooding, the hurricane center said.

This is the first time on record that the Atlantic had two major hurricanes, with winds exceeding 110 mph, in November, with Iota and Eta, according to Colorado State University hurricane researcher Phil Klotzbach. When Iota’s top winds reached 155 mph, they tied with 1999’s Lenny for the strongest Atlantic hurricane this late in the calendar year.

The official end of the hurricane season is November 30.