This website requires the use of Javascript to function correctly. Performance and usage will suffer if it remains disabled.
How to Enable Javascript
UN: Pandemic Threatens Latin America’s Next Generation 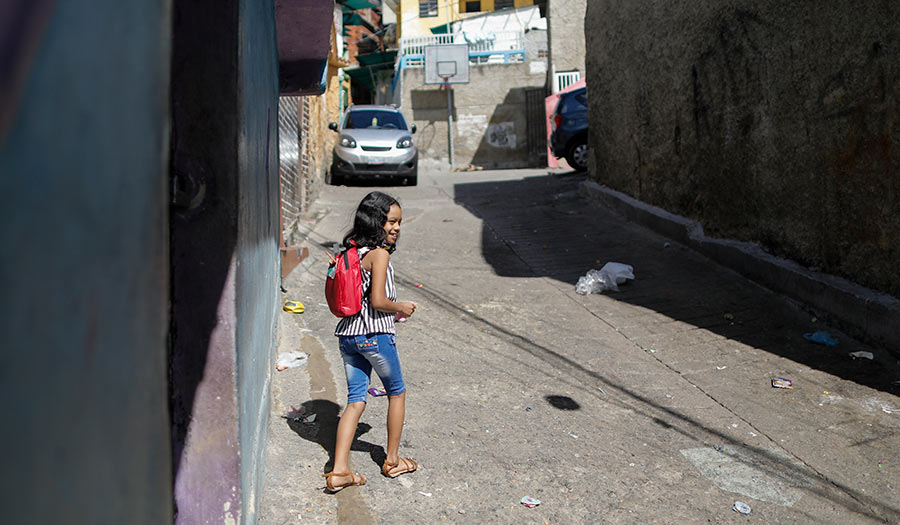 AP/Ariana Cubillos
Jenashly Matos walks back home after attending a tutorial class at a soup kitchen run by a charity in Caracas, Venezuela (Nov. 2, 2020). “If I’m not learning, I feel like I’m nobody in life,” said the 9-year old who aspires to one day become a doctor and help people. “That’s why I come here.”

CARACAS, Venezuela (AP) – Jenashly Matos may only be 9, but she has big dreams of one day becoming a doctor and helping people. The challenges she faces growing up today in a poor barrio in Venezuela’s capital amid a pandemic are also hefty.

The novel coronavirus has shut down schools in Venezuela and throughout Latin America. To keep from falling behind, she has started attending a neighborhood tutorial for a couple hours each morning to get help with assignments her teacher sends home.

“If I’m not learning, I feel like I’m nobody in life,” she said, while studying the parts of speech. “That’s why I come here.”

The pandemic has left millions of students falling behind in the world’s most unequal region, a study released Monday finds. Pandemic lockdowns, teacher shortages and electricity outages are forcing many Venezuelan students to advance their education outside the traditional brick and mortar school setting.

Venezuela is facing setbacks along with countries such as Mexico, Jamaica, Bolivia and Honduras.

The UN children’s agency UNICEF says that COVID-19 has deprived 97 percent of children in Latin America and the Caribbean of their normal schooling over seven months since the continent’s first COVID-19 cases were discovered. Distance learning is especially challenging for many families that do not have reliable tools, like internet, computers, TV and radio, further dividing the rich and poor.

While many schools in Africa, Asia and Europe are gradually reopening, the doors to classrooms remain shut in half of the 36 countries in Latin American and the Caribbean. Roughly 137 million children are missing out on education, with no end in sight to the pandemic.

More than 3 million students may never return to school, especially threatening the future of the most vulnerable—girls, disabled youths, migrants and indigenous children, the report warns.

A “generational catastrophe” looms as students miss out on learning at a critical stage in development, as well as vital nutrition from school meals, while girls are exposed to violence at home and risk early pregnancy.

“This prolonged absence from a face-to-face education will have serious implications for the future and development of all these children and adolescents,” said Vincenzo Placco, a Panama-based education specialist at the UNICEF Regional Office for Latin America and the Caribbean.

“Let’s not forget that Latin America and the Caribbean, like other regions of the world, were already facing an educational crisis,” he added.

Jenashly, who is determined not to have her dreams denied, crowded around a table with several other children at a neighbor’s home in a hilltop barrio in Caracas. She scribbled into a folder in front of her, asking for help from the tutor.

A Venezuelan charity, Feed the Solidarity, was already preparing meals for thousands of hungry children in the country’s poorest neighborhoods before the pandemic. The demand for meals climbed, and organizers also started neighborhood study groups, like this one, to help stem the educational decline.

Erika Cordero, 33, tutors about 20 students in small groups of neighborhood children in her mother’s home. They cover everything from long division to reading, said Ms. Cordero, who sees too many children falling behind.

“I have kids who are in fourth or fifth grade who can’t even read,” Ms. Cordero said. “I’m not a teacher, but…let’s help them achieve their goal anyway I can.”

Teachers with advanced degrees and years of experience earn the equivalent to $3 a month, he said, adding that roughly half of the nation’s 554,000 schoolteachers in the last five years have left the profession, many among the masses who migrated away from their native country seeking better opportunities.

“We’d already been in the middle of a severe humanitarian emergency, with all that means,” Ms. Ramirez said. “Now, along comes the coronavirus aggravating the situation.”

The economic hit to Latin America and the Caribbean countries is expected to reduce school budgets across the region by 9 percent, a dramatic reversal to a steady rise in spending before the pandemic, researchers said.

However, UNICEF is urging national leaders to take advantage of the pandemic by creating more equitable and inclusive schools that can be more resilient in future crises.

“We truly believe that we have a once in a generation opportunity to reimagine education,” Mr. Placco said.

Jenashly’s mother, Saray Farias, 33, said she worries about the future of Venezuela, as it fails to prepare its next generation. She tries to help all four of her children, aged 5 to 15, with their school work, but she admits it is often too time consuming—and sometimes mind-bending.

Her husband, a mechanic, is forced to find odd jobs because there is no steady work, and she runs a small store in the front of her home, selling things like rice, onions and milk to neighbors.

“Yes, it has been quite complicated for me to educate them when they should be in a school,” Ms. Farias said. “Sometimes, there’s homework that I don’t understand.”

Starved Out of Venezuela
Millions are fleeing their oil-rich South American home in search of food and stability.