This website requires the use of Javascript to function correctly. Performance and usage will suffer if it remains disabled.
How to Enable Javascript
Children Pulled Alive in Dramatic Turkey Quake Rescues; Death Toll Hits 94 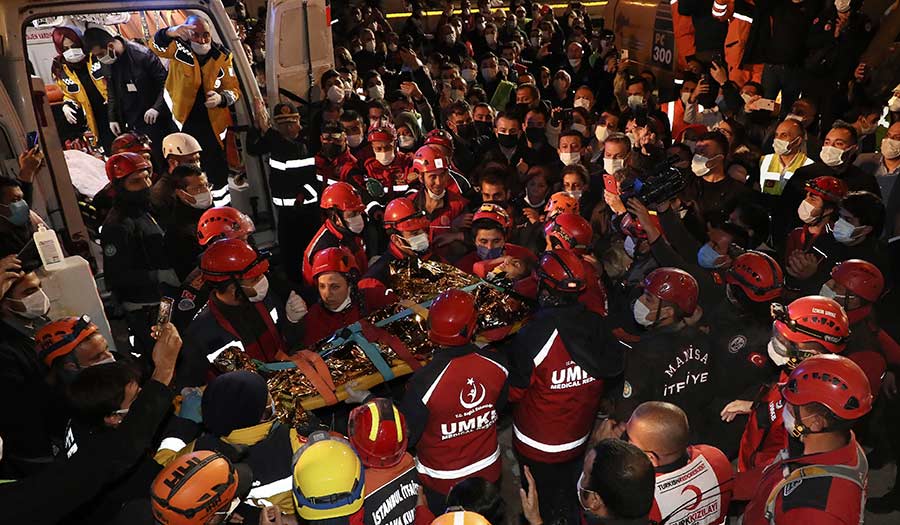 AFAD via AP
Rescue workers who were trying to reach survivors in the rubble of a collapsed building carry to an ambulance 14-year-old Idil Sirin, who was pulled from rubble 58 hours after a strong earthquake hit Izmir, Turkey (Nov. 2, 2020).

IZMIR, Turkey (AP)—When firefighter Muammer Celik reached a 3-year-old girl trapped for three days under the rubble of a deadly earthquake in a Turkish coastal city, his heart sank. She was lying motionless, covered in dust, and he asked a colleague for a body bag.

But as Mr. Celik extended his arm to wipe her face, the child opened her eyes and grabbed hold of his thumb.

“That’s where we saw a miracle,” Mr. Celik of the Istanbul fire department’s search-and-rescue team told The Associated Press, recounting Monday’s operation 65 hours after the quake hit, killing at least 94 people in Turkey and Greece.

It was the second dramatic rescue Monday after a 14-year-old was also pulled out alive. Onlookers applauded with joy and wept with relief at both scenes in the Turkish city of Izmir, where the vast majority of the deaths and nearly 1,000 injuries have occurred. Two teenagers also died and 19 people were injured on the Greek island of Samos, near the quake’s epicenter in the Aegean Sea.

The U.S. Geological Survey rated the quake 7.0, though other agencies recorded it as less severe. Many buildings were completely reduced to rubble or saw several floors pancake in on themselves in Turkey, which has a mix of older buildings and cheap or illegal construction that does not withstand earthquakes well. Regulations have been tightened to strengthen or demolish older buildings, and urban renewal is underway in Turkish cities, but it is not happening fast enough.

Mr. Celik, whose team was among several who traveled to Izmir, said he found Elif Perincek lying on her back between her bed and a closet in a space that was just big enough for her.

“At first I was very upset,” he said. “Then I stretched out my hand to clean her face and she grabbed my thumb…I froze because right before that moment, I had asked my team for a blanket and a body bag.”

His voice breaking with emotion, he added: “This is a firefighter’s joy.”

The child spent nearly three full days in the wreckage of her apartment and became the 106th person to be pulled alive from the rubble. Her mother and two sisters—10-year-old twins—were rescued two days earlier. Her 6-year-old brother did not survive.

“Can anyone hear me?” a team leader shouted, asking possible survivors to bang against surfaces three times if they could.

Officials said 147 quake survivors were still hospitalized, and three of them were in serious condition.

The quake also triggered a small tsunami that hit Samos and the Seferihisar district of Izmir province, where one elderly woman drowned. The tremors were felt across western Turkey, including in Istanbul as well as in the Greek capital of Athens. Hundreds of aftershocks followed.

Turkey sits on top of fault lines and is prone to earthquakes. In 1999, two powerful quakes killed some 18,000 people in northwestern Turkey. Earthquake are frequent in Greece as well. 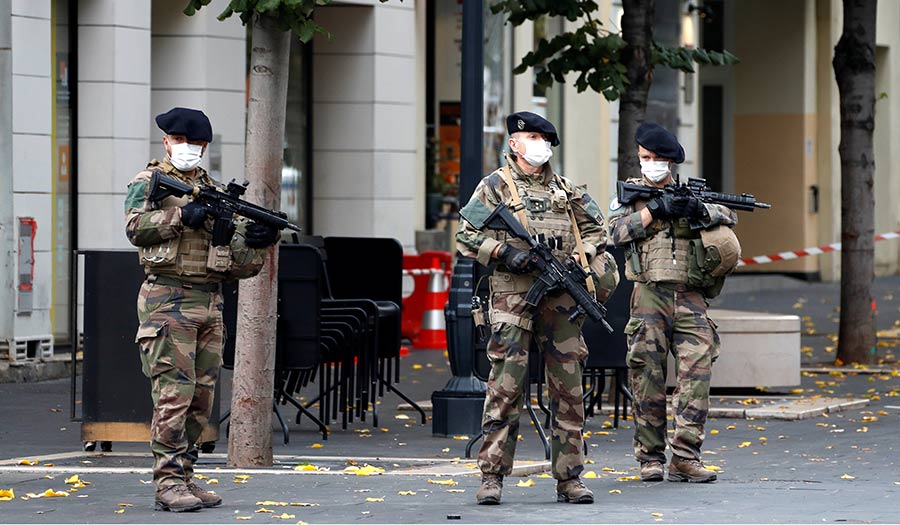 Three Dead as Woman Beheaded in France, Gunman Killed in Other Incident
NICE, France (Reuters) – A knife-wielding attacker shouting “Allahu Akbar” beheaded a woman and killed two other people at a church in the French city of Nice on Thursday, while a gunman was shot dead by police in a separate incident.