This website requires the use of Javascript to function correctly. Performance and usage will suffer if it remains disabled.
How to Enable Javascript
Poll: Virginians About Evenly Divided on Confederate Statues 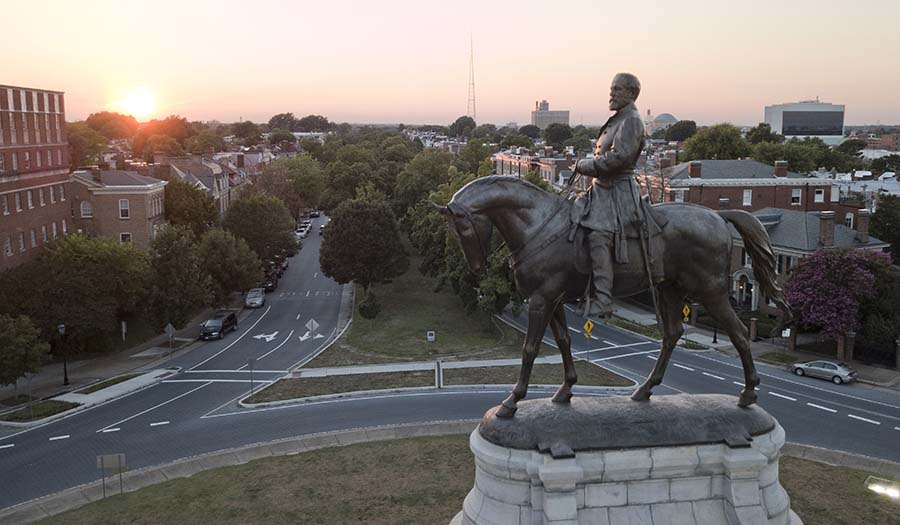 FALLS CHURCH, Va. (AP) – In a state where Confederate monuments have stood for more than a century and have recently become a flashpoint in the national debate over racial injustice, Virginians remain about evenly divided on whether the statues should stay or go, according to a new poll.

The poll conducted this month by Hampton University and The Associated Press-NORC Center for Public Affairs Research found that 46% support removal of Confederate statues and 42% oppose removal. A similar divide emerged over the question of changing the names of schools, streets and military bases named after Confederate leaders, with 44% in support and 43% opposed.

The question of the Confederacy’s legacy in Virginia is particularly pointed given that Richmond is the former Confederate capital. Protests in Richmond and other parts of the state this year have at times targeted longstanding Confederate memorials.

City officials have removed most of the statues from Richmond’s famed Monument Avenue. But the most prominent one, a towering tribute to Confederate Gen. Robert E. Lee, still stands pending resolution of a lawsuit. The statue is owned by the state.

Clayton Collins, 84, a retired electrician, said he strongly opposes removing the monuments because they are “part of history.”

Yet the views of Mr. Collins are just one side of the argument.

“I just can’t really understand why anyone doesn’t see those monuments for what they actually are,” said Joanne Bach, 59.

“They were put up as a reminder for blacks to stay in their place…that you live in a white-dominated world,” she said. “And I find them to be intimidating.”

Ms. Bach works in customer service in the food industry. She said her great-grandfather fought for the Confederacy and was captured at the pivotal Battle of Gettysburg.

“But it doesn’t, in any way, make me feel like I’m a daughter of the Confederacy who thinks, ‘I wish we’d have won the war,’” she said.

Unlike Ms. Bach, however, Mr. Collins said the statues are “not intimidating anybody.”

“It’s just the same thing as putting up the crucifixion of Christ or the manger scene,” he said, adding that the efforts to remove monuments are part of a broader effort by “socialists” who “want to do away with the past” and ban conservatives from speaking at universities.

The 2017 white nationalist rally in Charlottesville that left a counterprotester dead had its origins in a city debate over whether to remove Confederate statues.

While the poll found a nearly even split on the question of Confederate statues and names, it found more consensus on whether the Confederate flag should be banned from display on government property, with 60% supporting a ban and 29% opposed.