This website requires the use of Javascript to function correctly. Performance and usage will suffer if it remains disabled.
How to Enable Javascript
New Japan Prime Minister Replacing Shinzo Abe Pledges Reform 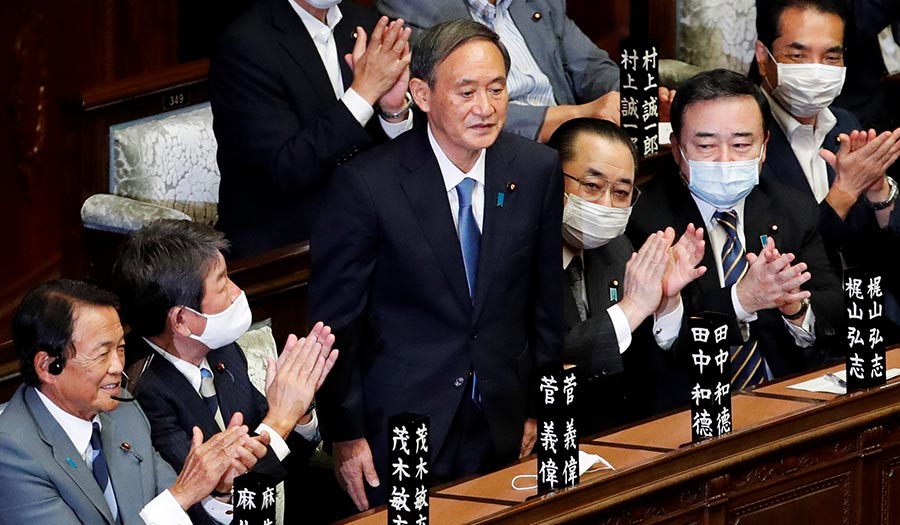 Reuters/Kim Kyung-Hoon
Japan’s newly elected Prime Minister Yoshihide Suga stands as he was chosen as the new leader of government at the Lower House of Parliament in Tokyo (Sept. 16, 2020).

Mr. Suga, 71, said he would stick with his former boss’ “Abenomics” growth policies while pushing reforms including deregulation, digitalization and smashing of bureaucratic barriers.

Seeming to play down the possibility of an early election, he said what Japanese most wanted was to contain the coronavirus outbreak and revive the battered economy. “This is the first thing I want to work on with my new cabinet,” he told reporters.

A lower house election must be held by late October 2021 but there is speculation Mr. Suga might call a poll sooner to cement his mandate.

Mr. Suga served under him as chief cabinet secretary, acting as the top government spokesman and coordinating policies. He also had the task of defending Mr. Abe during cronyism scandals that at times dragged down cabinet support rates.

Mr. Suga, who won a ruling Liberal Democratic Party (LDP) leadership race by a landslide on Monday, faces a plethora of challenges from the pandemic to a rapidly ageing society.

With little diplomatic experience, he must also cope with an intensifying U.S.-China confrontation, build ties with the winner of the November 3 U.S. election and try to keep Japan’s own relations with Beijing on track.

At his news conference, Mr. Suga said he would implement policies to beef up Tokyo’s alliance with the United States, while hoping to establish stable relationships with China and Russia.

U.S. Secretary of State Mike Pompeo issued a statement saying Washington looked forward to working with Mr. Suga and calling the U.S.-Japan Alliance “the cornerstone of peace, security, and prosperity in a free and open Indo-Pacific.”

Elected by parliament earlier in the day, Mr. Suga received a formal appointment letter in a ceremony with Emperor Naruhito at which both wore face masks because of COVID-19.

Mr. Suga, unlike Mr. Abe and many other LDP lawmakers, does not hail from a political dynasty. His image has been more that of a backroom fixer than a front-line leader, although his popularity has grown since he decided to run to replace Mr. Abe.

He has said Japan may eventually need to raise its 10 percent sales tax to pay for social security, but not for the next decade.

“Abe’s administration built political capital for itself with loose monetary and fiscal policies, a balanced and skillful diplomacy with the United States and China, and implementation of flexible domestic politic,” he said.

“The new administration, on the other hand, faces a rough road ahead.”