This website requires the use of Javascript to function correctly. Performance and usage will suffer if it remains disabled.
How to Enable Javascript
Violent 24 Hours in Rio de Janeiro, as Shootouts Plague City 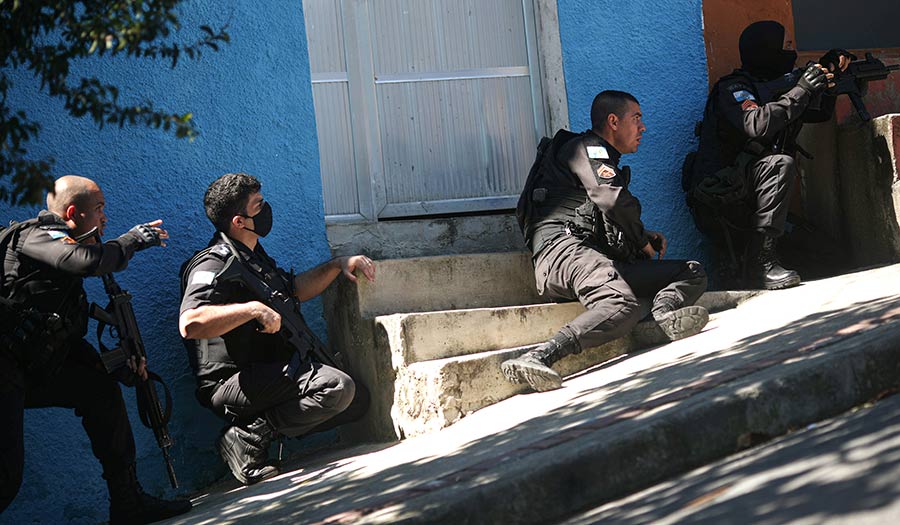 Rio de Janeiro (Reuters) – A family held hostage by drug traffickers. A violent police shootout on a busy street. A mother killed while shielding her three-year-old daughter from gunfire.

Even for residents accustomed to violence, the last 24 hours have been grim in Rio de Janeiro, as a series of shootouts broke out across the city among warring criminal gangs and police.

It started late Wednesday, when heavily armed members of one of Brazil’s largest criminal organizations, Comando Vermelho or Red Command, were driving though the wealthy neighborhood of Lagoa and their car broke down, according to local media.

They exited the car armed and were spotted by passing police officers. Over 40 shots were exchanged, resulting in two arrests and multiple injuries.

But the gang, which was trying to wrest control of the Sao Carlos neighborhood in central Rio from an enemy organization, was undeterred. By evening, an intense shootout ensued there with images of the fighting aired widely by local broadcasters.

One local resident, 25-year-old Ana Cristina da Silva, was walking to a bar where she worked with her three-year-old daughter when they were caught in the crossfire, police said.

Ms. Da Silva wrapped herself around her daughter and was hit by a stray bullet. By the time firefighters brought Ms. da Silva to a local hospital, she was dead, according to police.

On Thursday afternoon, after a related shootout with police, one suspect fled into a nearby condominium, taking a family hostage, police said. Later, the suspect freed the family and turned himself in.

The state of Rio, which includes Rio city and its metropolitan area, registered 3,025 murders in 2019. Rio’s notoriously violent police force killed 1,814 people during that period, according to public data.

In May, after a 14-year-old boy at a pool party was killed in a botched raid, provoking widespread protest, Brazil’s Supreme Court put in place restrictions on police operations in the state.

Police and local officials complain their hands are unduly tied. Organizations that have denounced police violence say both violent crime and police killings have remained relatively low in the months since that order was put into place.

“Rio has over 1,400 ‘comunidades,’” said police spokesman Mauro Fliess, referring to often-poor, crime plagued neighborhoods. “And four criminal gangs are fighting for control of the area, fist to fist, with weapons of war.”