This website requires the use of Javascript to function correctly. Performance and usage will suffer if it remains disabled.
How to Enable Javascript
Punished for Being Poor? Mexico Child Labor Case Makes Poverty a Crime, Critics Say 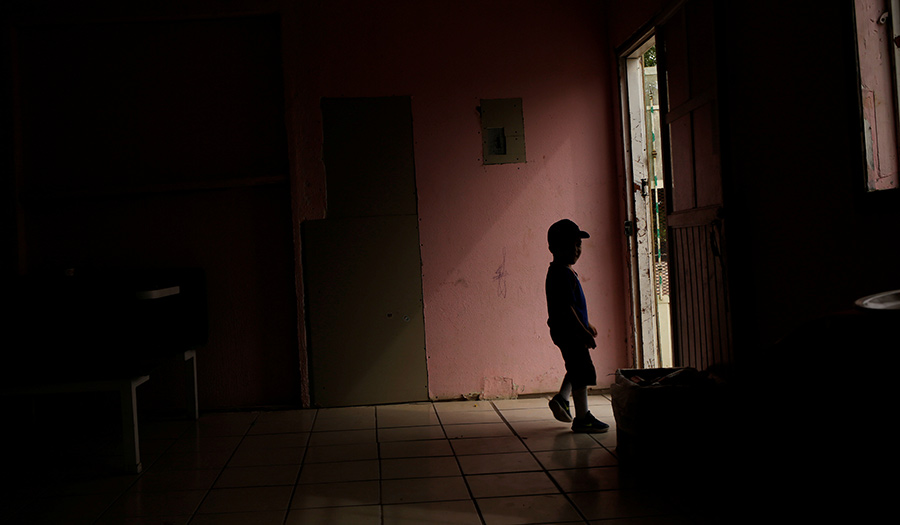 Reuters/Jose Luis Gonzalez
A Central American migrant child sent back to Mexico from the U.S. with his parents at the Pan de Vida migrant shelter in Ciudad Juarez, Mexico (Sept. 13, 2019).

MEXICO CITY (Thomson Reuters Foundation) – The arrest of three Mexican women accused of trafficking more than 20 children from within their extended family has been criticized by rights activists, who say they are being punished for being poor.

Prosecutors found the malnourished children during a raid last month on a house in Chiapas, the country’s poorest state, and said they were being forced by their relatives to hawk souvenirs and other trinkets in the streets.

But campaigners and family members reject the trafficking charges, saying the three indigenous women—who are mothers to some of the children—simply took the youngsters to work with them occasionally, as many low-income parents do in Mexico.

“Lots of families…go out selling with their daughters and sons because there isn’t anywhere to leave them,” said Jennifer Haza, director of Chiapas children’s rights nonprofit Melel Xojobal.

“For us, there isn’t evidence of human trafficking,” she said, adding that instead of pursuing prosecutions in such cases, the state government should be looking at ways to give vulnerable children a better start in life.

Mother-of-five Enereida Gomez, sister of one of the detained women, said they sometimes had no choice but to take the children with them onto the streets while they sold handicrafts.

“We’re not criminals,” Ms. Gomez said, sobbing at a recent news conference on the case, which has received international media attention.

Another local nonprofit Colectiva Cereza has filed a complaint with the National Human Rights Commission (CNDH) to ask for its intervention in the case, citing what it called inconsistencies in the investigation.

But Chiapas State Attorney General Jorge Llaven has defended the prosecutions, saying children can be trafficked by their parents and that being poor cannot be an excuse for crime.

“Exploitation, of course, is a crime that is closely linked with poverty, but we can’t use poverty to justify a crime or else we would become ungovernable,” he told reporters earlier this month.

“We also aren’t criminalizing poverty, I want to make that clear,” he said.

The prosecutor’s office did not respond to a request for further comment about the case, which received renewed scrutiny following the death in custody of Adolfo Gomez, an indigenous Tzotzil man and the grandfather of most of the children.

His wife was also detained.

Labor trafficking expert Monica Salazar said it was important to consider the conditions that the three detained mothers were living in themselves, and what benefit they got from the situation.

Mexican law uses a very broad definition of trafficking, which has led to calls for it to be changed, including from the current government.

Ms. Salazar, who supports reforming the law, said it should be updated to reflect the reality of poor families.

“It’s not the same to talk about a ‘benefit’ that no one dies of hunger in a family versus organized crime taking advantage,” said Salazar, the founder of nonprofit Dignificando El Trabajo (DITRAC).

More than three quarters of people live in poverty in Chiapas, a southern state bordering Guatemala.

Thousands of children, including some of those found in the raid, do not have birth certificates or go to school, Ms. Haza said.

Twenty of the children who were found are now in a government shelter and Melel Xojobal is trying to reunite them with grandparents and other relatives. The other three are babies, so are with their mothers in prison, Ms. Haza said.

Prosecutors raided the house in Chiapas after Adolfo Gomez, the grandfather, was detained in a separate case linked to the disappearance of a two-year-old boy.

The missing boy was eventually found safe and well but Gomez died in prison within two weeks of his arrest. Relatives say prison authorities told them he had died by suicide, but they claim his body showed signs of torture.

Chiapas prosecutors said last week they had arrested two public servants for breaches of their duty of care of Gomez.