This website requires the use of Javascript to function correctly. Performance and usage will suffer if it remains disabled.
How to Enable Javascript
Floods in India, Nepal Displace 4 Million, At Least 221 Dead 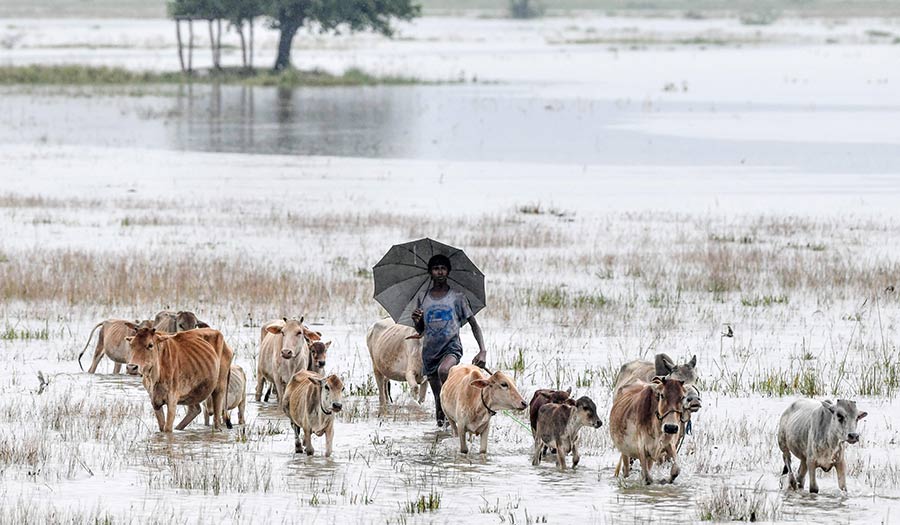 Biju Boro/AFP via Getty Images
A villager walks with his cattle through floodwaters at Buraburi village in India’s northeastern state of Assam (June 27, 2020).

Floods and landslides triggered by heavy monsoon rains have killed at least 221 people across South Asia over the past month.

Nearly four million people in India’s northeastern state of Assam and neighboring Nepal have been displaced by heavy flooding from monsoon rains.

More than 2.75 million people in Assam have been displaced by three waves of floods since late May that has claimed 79 lives after two more deaths were reported overnight, a state government official said.

Indian officials said floods and mudslides killed 16 more people in the northeast and eight people were killed in building collapses in Mumbai, raising the death toll in the country to 101. Nepal reported at least 117 deaths over the past month and Bangladesh reported three.

In the eastern state of Bihar, at least nine rivers swollen by heavy downpours in Nepal rose beyond their danger levels and inundated many villages. One of them, the Gandak River, swept away the connecting roads of a newly built multimillion dollar bridge, disrupting transportation in the area.

Annual monsoon rains hit the region in June-September. The rains are crucial for rain-fed crops planted during the season but often cause extensive damage.

India is grappling with the novel coronavirus, which has infected nearly 1.1 million people and 26,816 have died from the COVID-19 disease, government data showed on Sunday.