This website requires the use of Javascript to function correctly. Performance and usage will suffer if it remains disabled.
How to Enable Javascript
U.S. Farmers Scramble for Help as COVID-19 Scuttles Immigrant Workforce 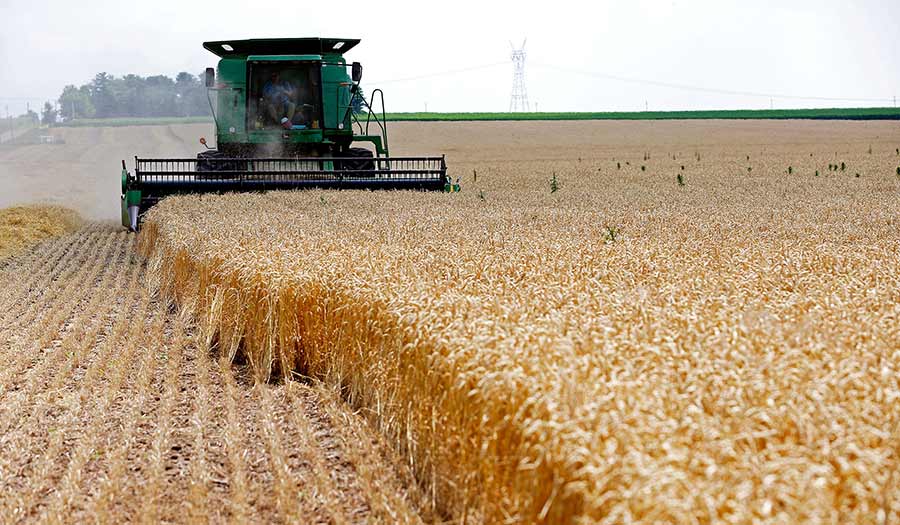 Reuters/Jim Young
A combine drives over stalks of soft red winter wheat during the harvest on a farm in Dixon, Illinois (July 16, 2013).

CHICAGO (Reuters) – The novel coronavirus delayed the arrival of seasonal immigrants who normally help harvest U.S. wheat, leaving farmers to depend on high school students, school bus drivers, laid-off oilfield workers and others to run machines that bring in the crop.

As combines work their way north from the Southern Plains of Texas and Oklahoma, farmers and harvesting companies are having a hard time finding and keeping workers. Any delays in the harvest could send wheat prices higher and cause a scramble to secure supplies to make bread and pasta.

The United States is the world’s No. 3 exporter of wheat, a crop in high demand during the pandemic. A sustained labor shortage could impact the soy and corn harvests that start in September.

Harvesting companies and farmers interviewed by Reuters said their new U.S. employees have required more training and quit at higher rates than usual, as the combines head north and begin to bring in other major export crops.

While grain harvests are more automated than the labor-intensive fruit and vegetable industries, they are not immune to labor shortages.

Josh Beckley of Beckley Harvesting Inc., based in Atwood, Kansas, typically counts on migrants for about 30 percent of his workers. The most common visa for migrant agriculture workers is the H-2A, which allows workers to stay in the U.S. for months at a time to work on farms.

This year, Mr. Beckley had no foreign laborers on his crew. He has struggled to find replacement workers, with many Americans unwilling to sign up for months of traveling through the U.S. farm belt.

“They called back and said, ‘Hey man, I just don’t think I should leave home with all this stuff going on,’” he said.

Custom harvesters, or companies hired to gather crops by small-scale farmers who do not own their own equipment, also employ migrants. They roll up to a thousand combines across the U.S. Great Plains and Midwest at harvest time, handling about 30 percent of the U.S. wheat crop.

The harvest crews follow a trail that begins in south Texas and winds its way up the bread basket of the United States to the Canadian border.

The number of H-2A visas granted for agriculture equipment operators rose to 10,798 from October through March, the typical hiring period for harvesters looking for a labor force that starts cutting wheat in May. That was up 49 percent from a year earlier, according to the U.S. Labor Department.

But many of those workers were unable to make it to the U.S. by the time the harvesters set off on their annual trek, according to eight harvesting companies and farmers interviewed by Reuters. Travel restrictions, tighter border controls and virus fears around the globe led to delays in workers getting out of their home countries.

Ryan Haffner, owner of Kansas-based High Plains Harvesting, had planned for 10 workers with H-2A visas to make up the bulk of his workforce when harvest began. But only four made it to the United States in time. He described his American replacements as “very noncommittal and wishy washy.” A laid-off oil worker backed out before his first day, Mr. Haffner said.

U.S. Custom Harvesters Inc, which represents convoy operators, said finding employees was the No. 1 issue for the industry.

The hiring difficulties are another headache for farmers who are struggling to return to profitability after watching their net income fall by about 50 percent from the 2013 peak. Now, their earnings are once again in doubt as sales to China remain uncertain even after a Phase 1 trade deal.

So far, the winter wheat harvest was 41 percent complete as of Monday, in line with recent years. The spring wheat crop will be harvested starting in August.

Even the biggest farmers, who own their own equipment, were having trouble filling out their workforce with Americans.

Doug Zink, a North Dakota grower with 28,000 acres, was left shorthanded this spring as two farmhands from South Africa did not arrive until late June.

“We had a lot of trouble getting our foreign workers over here,” he said. “They could not get flights.”

If workers keep quitting, the wheat harvest in northern stretches of the Plains and the harvest of the fall crops could be at risk.

David Misener, owner of Oklahoma-based Green Acres Enterprises, had planned on hiring two immigrants to fill out his four-person crew. He struggled to find suitable replacements, with three hires quitting within a week of starting.

“They could not fathom doing it and making it work,” said Mr. Misener, who runs his combines on a route that stretches from Texas to North Dakota from May into December.

Mr. Misener said he is already looking for replacements for the two high school-aged brothers on his crew who will drop off the trail when classes resume in August.

“My hiring for the year is definitely not done,” he said. “I am going to have to recruit somebody that doesn’t have to be in school.”