This website requires the use of Javascript to function correctly. Performance and usage will suffer if it remains disabled.
How to Enable Javascript
Huge Fentanyl Haul Seized in Asia’s Biggest-ever Drug Bust 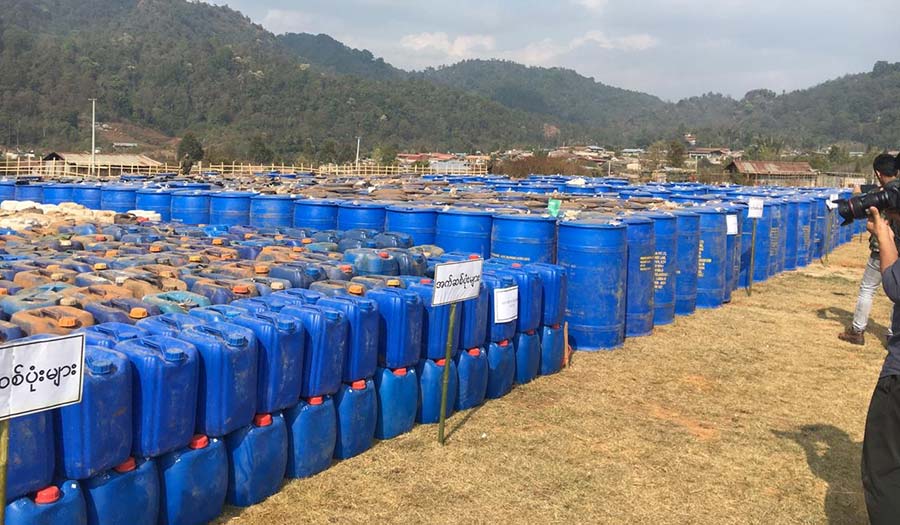 Myanmar Police/UNODC/Handout via Reuters
Chemicals used to make illicit drugs such as methamphetamine, ketamine, heroin and fentanyl are seized by Myanmar police and military.

JAKARTA (Reuters) – Myanmar police say they have seized a huge haul of liquid fentanyl, the first time one of the dangerous synthetic opioids that have ravaged North America has been found in Asia’s Golden Triangle drug-producing region.

In a signal that Asia’s drug syndicates have moved into the lucrative opioid market, Reuters can reveal more than 3,700 liters of methylfentanyl was discovered by anti-narcotics police near Loikan village in Shan State in northeast Myanmar.

The seizure of the fentanyl derivative was part of Asia’s biggest-ever interception of illicit drugs, precursors and drug-making equipment, including 193 million methamphetamine tablets known as yaba. At 17.5 tons, the yaba almost equaled the amount seized in the previous two years in Myanmar.

The UN Office on Drugs and Crime (UNODC) said the scale of the bust was unprecedented and Myanmar’s anti-drug authorities had “dismantled a significant network” during a two-month operation involving police and military. Also seized were almost 163,000 liters and 35.5 tons of drug precursors, as well as weapons. There were more than 130 arrests.

Even so, the methylfentanyl discovery was an ominous indicator for the region’s illicit drug market, the UN agency and a Western official based in Myanmar told Reuters.

“It could be a game-changer because fentanyl is so potent that its widespread use would cause a major health concern for Myanmar and the region,” said the Western official, who declined to be identified.

In an interview with Reuters, the head of law enforcement for Myanmar’s counter-narcotics agency, Colonel Zaw Lin, said the methylfentanyl had been verified using state-of-the-art equipment.

The seizure showed the methods of the drug syndicates were changing, he said.

Fentanyl and its derivatives have caused more than 130,000 overdose deaths in the United States and Canada in the past five years, according to government agencies. The opioid epidemic has not swept Asia, Europe or Australasia but there have been signs it is an emerging threat.

“We have repeatedly warned the region fentanyl could become a problem but this is off the charts,” said the UNODC’s Southeast Asia and the Pacific representative Jeremy Douglas.

“It is the shift in the market we have been anticipating, and fearing.”

While Myanmar police did not disclose the purity and exact make-up of the methylfentanyl found, it comes in two main variants, both more potent than fentanyl, according to the European Union’s drug monitoring agency.

Fentanyl itself is 25 to 50 times stronger than heroin.

Increasingly, drug traffickers have been mixing fentanyl and its derivatives with heroin, meth and cocaine, adding to their potency and lethality.

Half of all heroin and cocaine overdoses in the United States included substances with traces of synthetic opioids in 2017, a Rand Corporation analysis found.

A Canadian survey found 73 percent of those who tested positive for fentanyl did not know they had consumed it.

Mr. Zaw Lin said the methylfentanyl and other drugs and precursors were found in clearings near Loikan village where several drug factories were located but had been abandoned when the raids took place.

“Upon interrogation, the offenders revealed most of the drugs would be distributed inside Myanmar and distributed around neighbouring countries,” he said.

“But we are still conducting interrogations. We haven’t totally got the final destinations yet.”

Cheap to Make, Easy to Traffic

As well as being easier and cheaper to produce than heroin, strong synthetic opioids like fentanyl can be readily concealed and transported as only small amounts can deliver thousands of doses.

At a time when the coronavirus pandemic has closed borders and curbed movements in many countries, the UNODC is concerned that fentanyl will still spread around the world.

For decades, Asian crime syndicates in partnership with ethnic minority militias have used the Golden Triangle—centered on northern Myanmar and including parts of Laos and Thailand—to grow opium and refine heroin.

More recently, meth production by groups such as the Sam Gor syndicate has exploded in the region, in part due to a crackdown in neighboring China.

Mr. Zaw Lin said the methylfentanyl had come from a neighboring country but declined to identify it. Myanmar police documents reviewed by Reuters said most of the seized drugs, precursors and equipment had come from China.

China, along with Mexico, has been a major supplier of fentanyl to North America but escalating law enforcement efforts have brought a slump in Chinese exports of the synthetic opioid to the United States, according to the U.S. Drug Enforcement Administration.

Mexican cartels have picked up the slack but the UNODC said recent difficulties obtaining precursors from China had crimped their fentanyl production.

“The alliances between Myanmar’s ethnic militias and transnational crime groups must be broken or the synthetic drug problem will continue to deteriorate,” said the UNODC’s Douglas.

Mr. Zaw Lin said Myanmar was stepping up efforts to disrupt the syndicates and was increasing cooperation with other nations.

“Myanmar is carrying out counter-drug operations as one of our top national priorities,” he said.

The Hidden Economy of Drug Trafficking
While most understand the extent of the drug problem at the street level, this is merely the end result of a vast array of financial transactions that support everyone from average farmers to entire nations.