This website requires the use of Javascript to function correctly. Performance and usage will suffer if it remains disabled.
How to Enable Javascript
Air Pollution Reduces Global Life Expectancy by More Than One Year 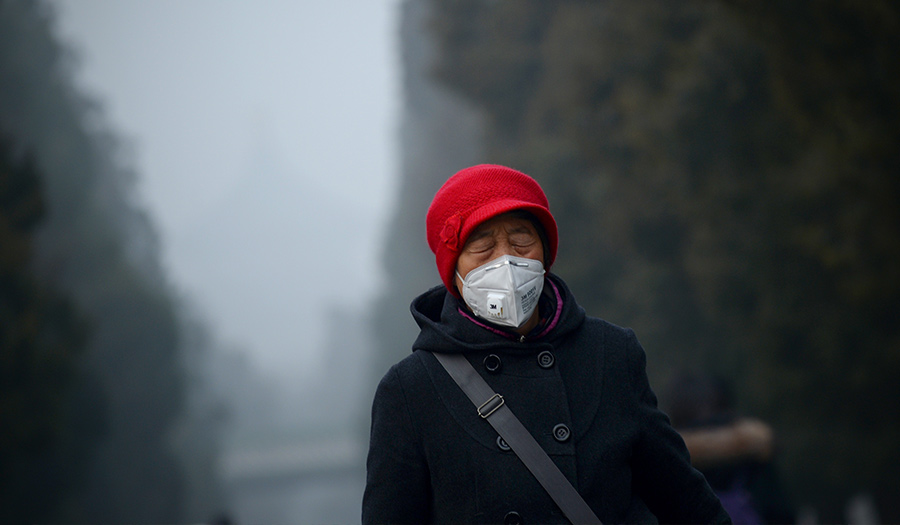 Wang Zhao/AFP/Getty Images
An elderly woman wearing a mask closes her eyes as she walks at a park in Beijing, China, during a fifth straight day of heavy smog (Dec. 20, 2016).

Air pollution shortens human lives by more than a year, according to a new study from a team of environmental engineers and public health researchers. On the other hand, better air quality could lead to a significant extension of lifespans around the world.

This is the first time that data on air pollution and lifespan have been studied together in order to examine how they affect overall life expectancy globally.

The researchers looked at outdoor air pollution from particulate matter (PM) smaller than 2.5 microns. These fine particles can enter deep into the lungs, and is associated with increased risk of heart attacks, strokes, respiratory diseases and cancer. Such pollution comes from power plants, cars and trucks, fires, agriculture and industrial emissions.

Led by Joshua Apte of the Cockrell School of Engineering at The University of Texas at Austin, the team used data from the Global Burden of Disease Study to measure air pollution exposure and its consequences in 185 countries. They then quantified the national impact on life expectancy for each individual country as well as on a global scale.

The findings were published August 22 in Environmental Science & Technology Letters.

“The fact that fine particle air pollution is a major global killer is already well known,” said Dr. Apte, who is an assistant professor in the Cockrell School’s Department of Civil, Architectural and Environmental Engineering and in the Dell Medical School’s Department of Population Health. “And we all care about how long we live. Here, we were able to systematically identify how air pollution also substantially shortens lives around the world. What we found is that air pollution has a very large effect on survival—on average about a year globally.”

Dr. Apte emphasized the significance of this number.

“For example, it’s considerably larger than the benefit in survival we might see if we found cures for both lung and breast cancer combined,” he said. “In countries like India and China, the benefit for elderly people of improving air quality would be especially large. For much of Asia, if air pollution were removed as a risk for death, 60-year-olds would have a 15 percent to 20 percent higher chance of living to age 85 or older.”

Dr. Apte believes this discovery is especially important for the context it provides.

“A body count saying 90,000 Americans or 1.1 million Indians die per year from air pollution is large but faceless,” he said. “Saying that, on average, a population lives a year less than they would have otherwise—that is something relatable.”