This website requires the use of Javascript to function correctly. Performance and usage will suffer if it remains disabled.
How to Enable Javascript
U.S. Human Trafficking Report Cites Mixed Progress in Asia 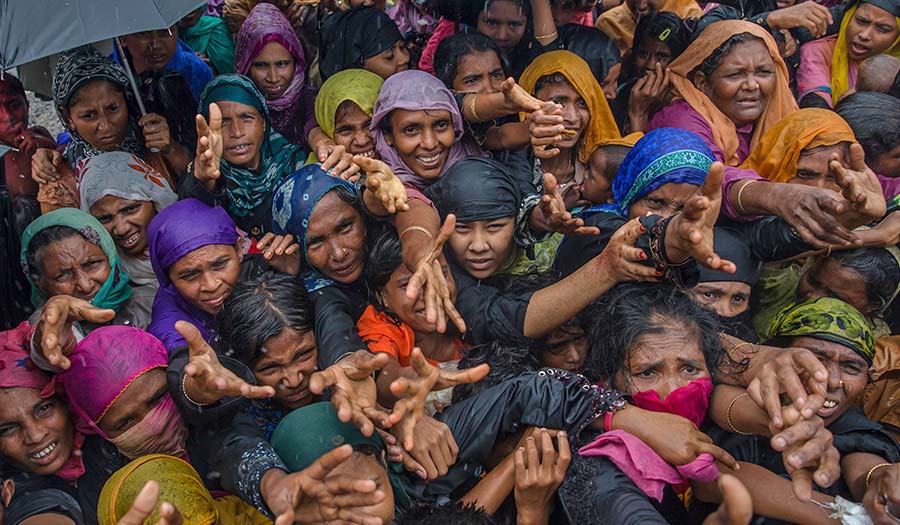 AP/Dar Yasin
Rohingya Muslim women, who crossed over from Myanmar into Bangladesh, stretch their arms out to collect products distributed by aid agencies near Balukhali refugee camp (Sept. 17, 2017).

The Trafficking in Persons annual report cited progress but also problems across the region, especially weak enforcement of protections against trafficking and slave and child labor.

The report released June 28 raised Thailand from a watchlist to tier 2, the second-best ranking. Neighboring Malaysia fell from tier 2 to the watchlist. Hong Kong, China and Singapore were faulted for inadequate efforts to prevent sex trafficking and forced labor.

Thai Deputy Prime Minister Prawit Wongsuwan said he was grateful for the improved assessment as it “reflects the determination and sincere intentions of the Thai government and our continued hard-work to tackle the issue of human trafficking.”

Thailand has faced global scrutiny for the use of slave labor on fishing vessels and for being a transit hub for traffickers from nearby nations. The State Department report cited the government’s convictions of traffickers and complicit officials, including 11 involved in the trafficking of Myanmar’s Rohingya migrants.

Myanmar was downgraded from the watchlist to the report’s lowest ranking, tier 3, primarily for trafficking and other abuses of its ethnic minorities. The report said officials and government-backed militias were increasingly recruiting and using children as soldiers in ethnic areas long affected by civil conflict.

The report also cited a trend toward forcing Burmese women into marriages in China. Children of the Rohingya minority are being kidnapped and sold into forced marriages in Indonesia, India and Malaysia, it said.

North Korea has remained at tier 3 for years, due to its use of forced labor and state-sponsored human trafficking and “negligible” anti-trafficking efforts. The report said the many North Korean refugees living in China are vulnerable to traffickers who force women into prostitution, forced marriages and domestic service or other labor.

But even in Japan—a wealthy, democratic nation listed at the highest ranking of tier 1—young women living in poverty are forced into prostitution by organized criminal networks that sometimes entrap them with promises of well-paid work as models or actors, the report said. Affluent Singapore, likewise, is a hub for sex trafficking and forced labor, facilitated by visa laws that make migrant workers vulnerable to exploitation by their employers and recruitment agencies, the report said.

Across the globe, the slave trade is alive and well—and with a staggering number of victims. For more on this, and the tragic stories of those who are victimized by trafficking, read Stolen Lives: Slavery in the 21st Century.

Stolen Lives: Slavery in the 21st Century
When the police showed up to her hotel room, Karla Jacinto thought they were her salvation. She and a handful of underage girls had been taken somewhere in Mexico and forced into a prostitution ring “servicing clients.”