This website requires the use of Javascript to function correctly. Performance and usage will suffer if it remains disabled.
How to Enable Javascript
Can Republicans Fix Immigration Amid Outrage over U.S.-Mexico Border?

Can Republicans Fix Immigration Amid Outrage over U.S.-Mexico Border? 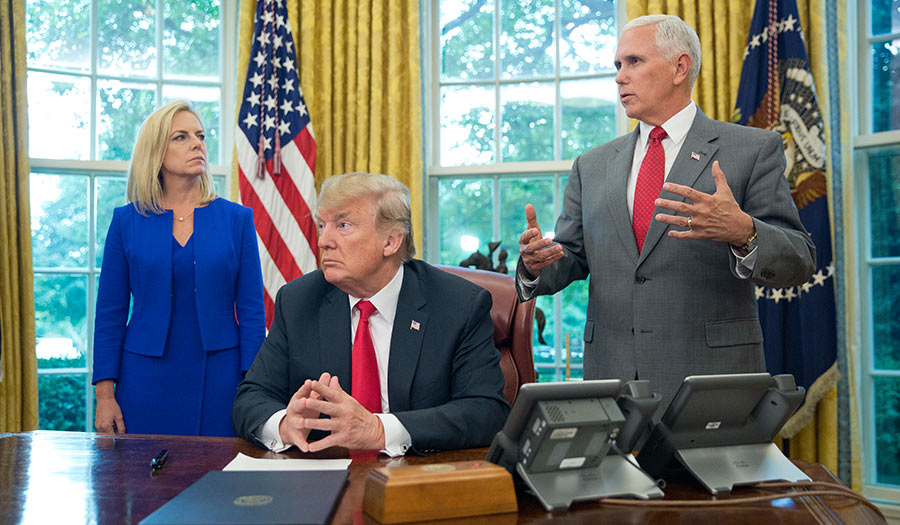 AP/Pablo Martinez Monsivais
President Donald Trump listens to Vice President Mike Pence address members of the media before signing an executive order to end family separations at the Mexico border, during an event in the Oval Office of the White House (June 20, 2018).

President Donald Trump has signed an executive order that reverses a policy separating more than 2,300 children from their parents at the U.S.-Mexico border, but House GOP leaders are still trying to get hesitant party members to agree to a measure to resolve broader immigration issues. A vote is expected Thursday. Democrats have seized the opportunity to highlight yet another one of the Trump administration’s self-inflicted wounds, but die-hard Trump supporters see no issues with the president’s about-face.

A look at the latest developments:

House GOP leaders have been working furiously to get reluctant Republicans on board in hopes of resolving broader immigration issues ahead of the November midterm elections.

But the sweeping House Republican immigration overhaul looked uncertain at best as lawmakers struggled to move past an issue that has become politically fraught amid the dire images and audio of families being separated at the border.

Passage of the bill was always a long shot, but failure may now come at a steeper price as Republicans—and Mr. Trump—have raised expectations that, as the party in control of Congress and the White House, they can fix the nation’s long-standing immigration problems.

Ahead of voting Thursday, the results of the outreach were mixed.

Mr. Trump on Wednesday said he did not like seeing families separated at the Mexico border and reversed the policy that has already separated more than 2,300 children from their parents, sparking worldwide outrage.

But there is confusion over how the new guidelines will play out and concern that they do not go far enough, allowing children to still be held in detention even if they remain with their families.

Peter Schey, the lawyer in a lawsuit that resulted in a key agreement governing the treatment of migrant children in detention called the Flores settlement, said he was concerned that several thousand children have already been separated from their parents “without the Trump administration having any effective procedures in place to reunite children with their parents, many of whom have already been deported.”

Officials have said they are working to reunite families as soon as possible but have provided no clear answers on how that will happen.

Democrats have seized on the latest crisis in the White House, fighting to ensure that Mr. Trump’s separation of migrant children from their families at the border is not quickly forgotten.

The kitchen-sink approach comes as Democrats work to sustain the energy of the Trump resistance heading into this fall’s midterm elections when the GOP’s House and Senate majorities are at stake.

“I’m still on the highest level of alert. I still think we’re in a state of national crisis,” New Jersey Sen. Cory Booker told The Associated Press in an interview.

The current immigration crisis is the latest in a long line of bloody political battles that reveal how divided the nation has become. While it is often Republicans versus Democrats, there are even further splits within individual parties. Each person thinks he or she is right. No one wants to budge an inch.

We have entered the age of hyperpartisanship where political divisions are now chasmic. The terms “Mexico border,” “refugees,” “gun control,” “healthcare” and the like all elicit deep, emotional responses where “my side is right.” Any opposing opinions are viewed with resentment at best and hatred at worst.

How long can we go on like this? Read America’s Unbridgeable Political Divide for more.