This website requires the use of Javascript to function correctly. Performance and usage will suffer if it remains disabled.
How to Enable Javascript
China Poised to Build Bigger Warships as New Aircraft Carrier Heads Out for Sea Trials 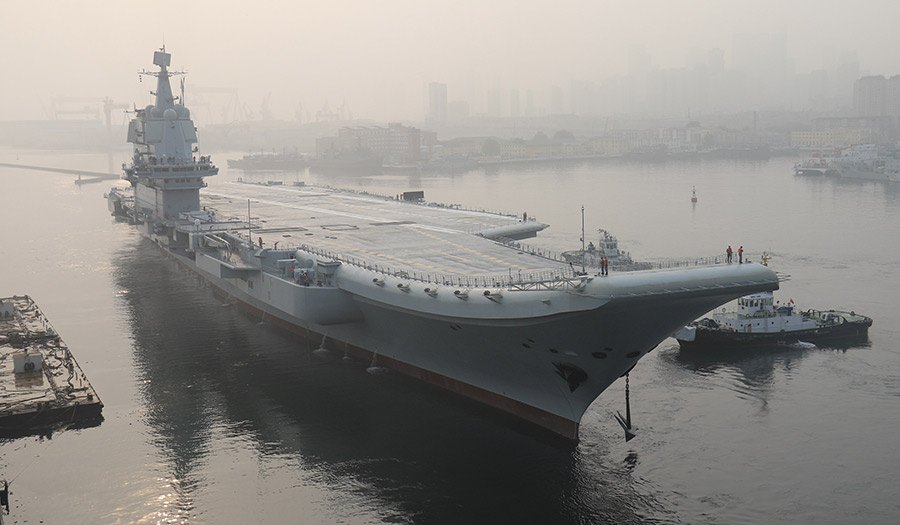 In 2012, China hailed the launch of its first aircraft carrier as a “70-year dream.” Dubbed the Liaoning, the Soviet-era vessel was purchased from the Ukraine in 1998 and rebuilt.

Only four years later since the Liaoning was launched, Beijing is sending out its first homegrown aircraft carrier that is larger and more powerful.

The new model is about 1,033 feet in length, 246 feet wide, and carries more planes than the Liaoning. According to Reuters, the “new conventionally powered carrier will be able to operate China’s Shenyang J-15 fighter jets.”

“China’s navy has been taking an increasingly prominent role in recent months, with its first aircraft carrier, expected to serve more as a training vessel, sailing around self-ruled Taiwan and new Chinese warships popping up in far-flung places,” the news outlet continued.

Although Beijing intends to expand its fleet to counter the influence of the United States in the contested South China Sea, experts say the new ship lacks the technological advancement to match American naval power.

“This is, in and of itself, not designed to be some frontal challenge to US power in the Asia Pacific, because it simply isn’t in the class of America’s aircraft carriers,” Sam Roggeveen, a senior fellow at Sydney’s Lowy Institute, told CNN.

The U.S. Navy operates 11 nuclear-powered aircraft carriers, more than any other nation.

Yet China’s experts believe the advancement will allow the nation to begin building bigger warships. “Even though there’s a gap now between the new aircraft carrier and the most advanced one in the world, China will speed up on shipbuilding and narrow the gap…we will build a large carrier in the future,” Beijing-based naval expert Li Jie told the South China Morning Post.