This website requires the use of Javascript to function correctly. Performance and usage will suffer if it remains disabled.
How to Enable Javascript
Fish Populations Plummet After Mass Coral Bleaching in Great Barrier Reef 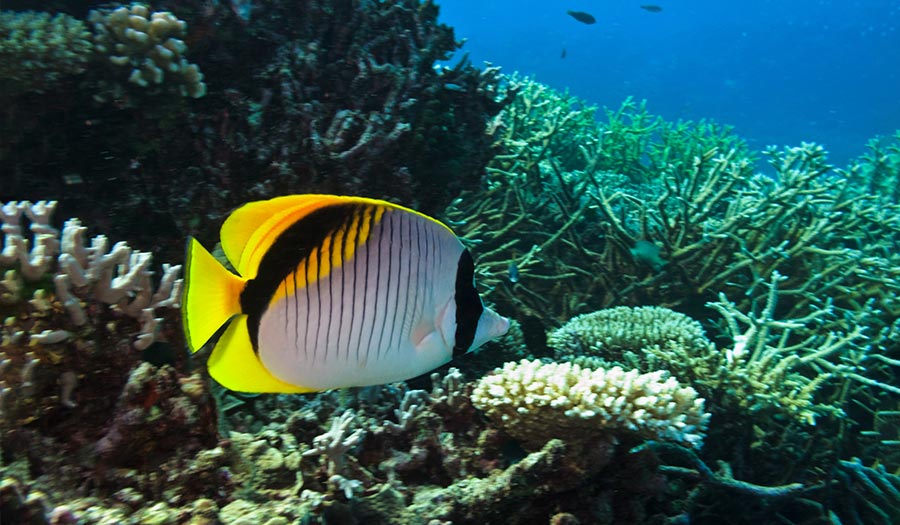 Getty Images
Butterflyfish, which feed on coral, have suffered the greatest population decline after bleaching events in the Great Barrier Reef.

Australia’s Great Barrier Reef, famed for its multicolored corals, suffered its worst bleaching event on record in 2016, causing an estimated loss of more than one-quarter of its shallow-water coral.

In addition to the coral, another colorful part of the reef is also under threat.

A study by researchers at James Cook University in Australia and Lancaster University in the United Kingdom found that populations of fish living in the Great Barrier Reef are declining as a result of the coral bleaching event.

“Prior to the 2016 mass bleaching event, we observed significant variation in the number of fish species, total fish abundance and functional diversity among different fish communities. Six months after the bleaching event, however, this variation was almost entirely lost,” study co-author Dr. Andrew Hoey at James Cook University, stated. The research was published in the journal Global Change Biology on April 6.

Fish species that relied upon the coral for food and shelter, such as clownfish and butterflyfish, suffered the steepest population declines.

Dr. Hoey stated that the loss of fish diversity in the reef “is increasingly considered one of the most pressing, but largely unrecognized, biodiversity crises faced globally.”

According to the Independent, “The scientists behind the new study said the loss of variation on reefs following the death of corals is a major problem for ecosystems that rely on a complex network of biological processes to flourish.”

The problem in the Great Barrier Reef is only on part of declining biodiversity occurring worldwide. An increasing number of plant and animal species on each continent are dying off—and many of these trends can be traced to manmade causes.

What does this mean for mankind? Read Going Extinct: The Rapid Disappearance of Biodiversity.