This website requires the use of Javascript to function correctly. Performance and usage will suffer if it remains disabled.
How to Enable Javascript
South Africa Drought Now a National Disaster 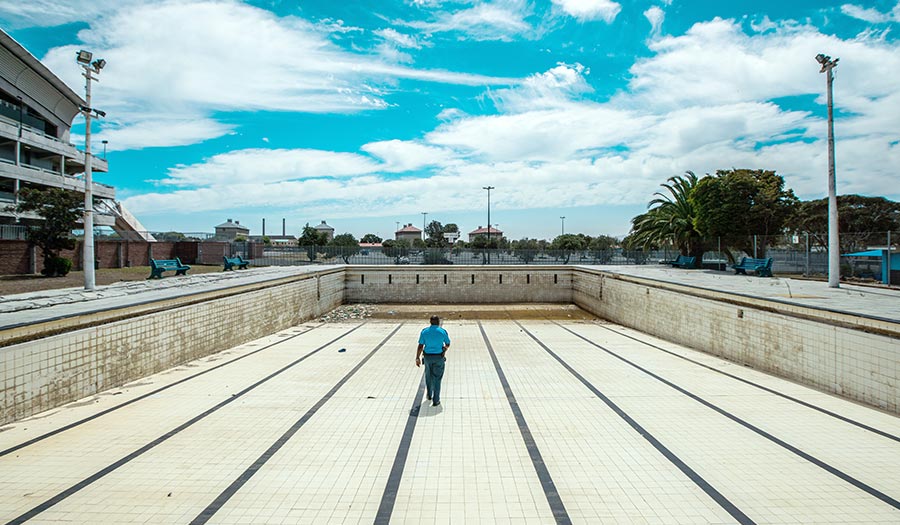 Morgana Wingard/Getty Images
Dried Up: A public swimming pool in a suburb of Cape Town has been emptied due to local water restrictions. A man who has maintained the pool since 1997 said he has never seen it emptied. Usually, there are more than 1,000 people here on the weekend during the summer.

South Africa has declared the drought afflicting Cape Town and other parts of the nation a national disaster. The government announcement on March 13 will allow officials to more easily direct resources to drought relief and long-term recovery plans.

The government said the drought is especially severe in the three Cape provinces in the south of the country.

Cape Town has warned for months of a looming “Day Zero,” the date when the city of 4 million will have to close most water taps because of the drought. However, the opposition party running the city said last week that “Day Zero” might not happen at all this year because of water conservation efforts.

“Day Zero” is currently set for July 9, when South Africa’s Western Cape province should experience a cooler, rainy winter season that many hope will replenish water reserves that currently are at 24 percent capacity.

However, Western Cape has had below-average rainfall for the past three years, leaving no assurance 2018 will bring a reversal. Even if it does, water use restrictions will remain in place, South Africa’s opposition party leader Mmusi Maimane, who controls Cape Town’s drought crisis team, announced on March 7.

Some Capetonians are learning to cope with the regulations, which limit individual water use to about 13 gallons per person, per day—less than the amount of water the average American uses in an 8-minute shower. One restaurant in Cape Town, self-dubbed The Drought Kitchen, is using paper plates and plastic cutlery to eliminate the need to wash 5,000 plates a week, The Telegraph reported.

Still others such as former Cape Town mayor and current premier of Western Cape Hellen Zille are less optimistic. “The question that dominates my waking hours now is: When Day Zero arrives, how do we make water accessible and prevent anarchy?” Ms. Zille stated in Johannesburg newspaper Daily Maverick.