This website requires the use of Javascript to function correctly. Performance and usage will suffer if it remains disabled.
How to Enable Javascript
Astronomers Find Nearly 100 Planets Beyond Solar System 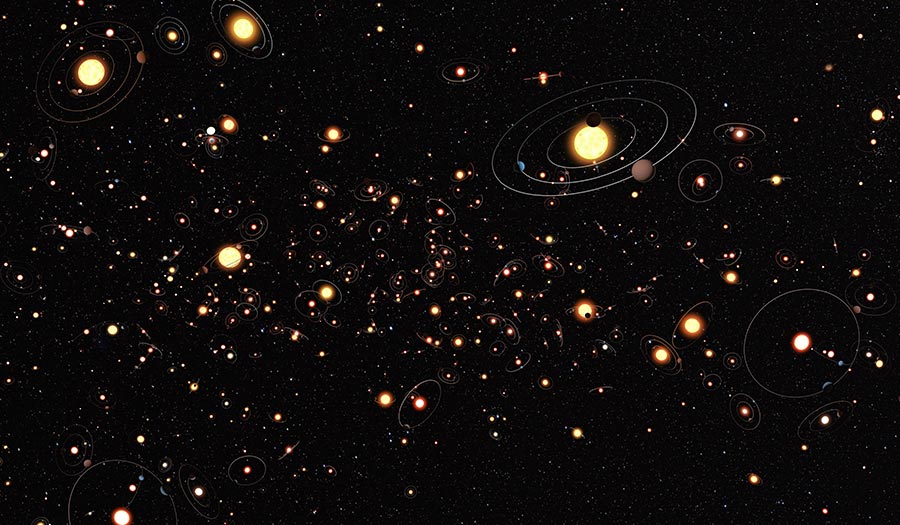 ESO/M. Kornmesser
Other Worlds? An artist’s illustration of exoplanets revolving around stars in the Milky Way galaxy.

Using data from NASA’s Kepler Space Telescope, an international team of researchers have discovered 95 exoplanets—planets outside of the solar system—bringing the total number of exoplanets found during the spacecraft’s nine-year mission to 2,633.

The exoplanets were first detected by Kepler as it recognized fluctuations in light from distant stars, indicating the presence of an object passing between the star and the telescope. The international research team then used Kepler’s data to confirm whether these objects were planets.

“We found that some of the signals were caused by multiple star systems or noise from the spacecraft,” Andrew Mayo, an American PhD student at the National Space Institute of the Technical University of Denmark and the study’s lead author, stated on the institute’s website. “But we also detected planets that range from sub Earth-sized to the size of Jupiter and larger.”

Scientists believe billions more exoplanets exist in the Milky Way and expect to continue spotting new worlds in other star systems as the “field of exoplanets is relatively young,” according to an article on the National Space Institute’s website. “The first planet orbiting a star similar to our own Sun was detected only in 1995. Today some 3,600 exoplanets have been found, ranging from rocky Earth-sized planets to large gas giants like Jupiter.”

“Exoplanets are a very exciting field of space science,” Mr. Mayo stated. “As more planets are discovered, astronomers will develop a much better picture of the nature of exoplanets which in turn will allow us to place our own solar system into a galactic context.”