This website requires the use of Javascript to function correctly. Performance and usage will suffer if it remains disabled.
How to Enable Javascript
Drugs, Alcohol and Suicide Shortening Americans’ Life Expectancy 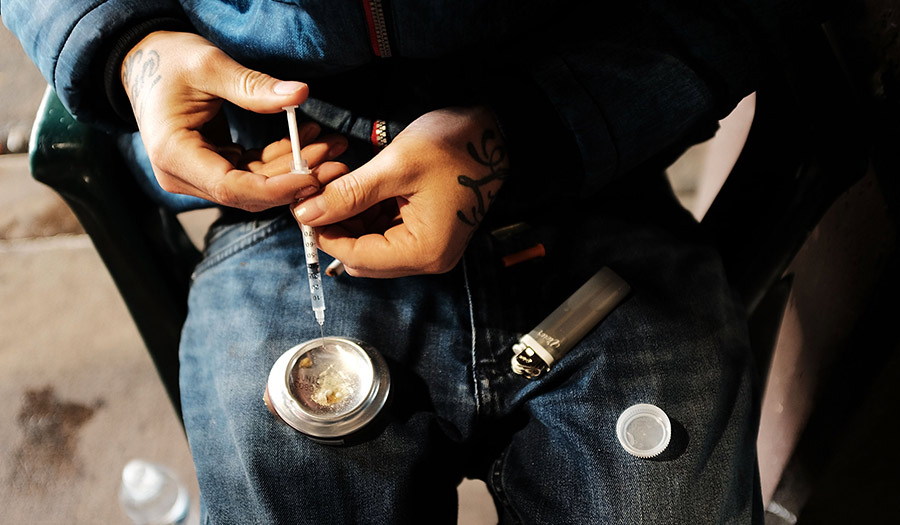 Spencer Platt/Getty Images
A man uses heroin under a bridge where he lives with other addicts in Philadelphia, Pennsylvania (Jan. 24, 2018).

Americans’ penchant for drugs, alcohol, unhealthy food, and tendency toward suicide has caused the overall life expectancy in the U.S. to fall for the second year in a row, according to a study published in the medical journal The BMJ.

“Between 2000 and 2014, the rate of fatal drug overdoses rose by 137%, a crisis fueled by the growing use of highly addictive opioid drugs,” the publication reported. “In 2015 alone, more than 64,000 Americans died from drug overdoses, exceeding the number of US casualties in the Vietnam war. Drug addiction is devastating families and the social fabric of communities. The country is belatedly scrambling to reduce access (with, for example, prescription drug monitoring and drug take back programs), improve emergency responses to reverse overdoses (such as naloxone programs), and enhance access to effective addiction treatment (such as medication assisted treatment).”

“But the opioid epidemic is the tip of an iceberg, part of an even larger public health crisis in the US: death rates from alcohol abuse and suicides have also been rising. Between 1999 and 2014, the suicide rate rose by 24%. These ‘deaths of despair,’ as some have called them, are disproportionately affecting white Americans, especially adults aged 25-59 years, those with limited education, and women. The sharpest increases are occurring in rural counties, often in regions with longstanding social and economic challenges.”

Americans habits are also wreaking havoc on their life expectancy.

“Americans had poorer health in many domains, including birth outcomes, injuries, homicides, adolescent pregnancy, HIV/AIDS, obesity, diabetes, and heart disease. It also found that many factors contribute to the health disadvantage; for example, Americans are more likely to engage in unhealthy behaviors (such as heavy caloric intake, drug abuse, and firearm ownership), live in cities designed for cars rather than pedestrians or cyclists, have weaker social welfare supports, and lack universal health insurance.”

The study called this an “alarming” trend “because life expectancy has risen for much of the past century in developed countries, including the US,” yet said “it has been unfolding for decades.”