This website requires the use of Javascript to function correctly. Performance and usage will suffer if it remains disabled.
How to Enable Javascript
Cape Town Set to Run Out of Water in 3 Months

Cape Town Set to Run Out of Water in 3 Months 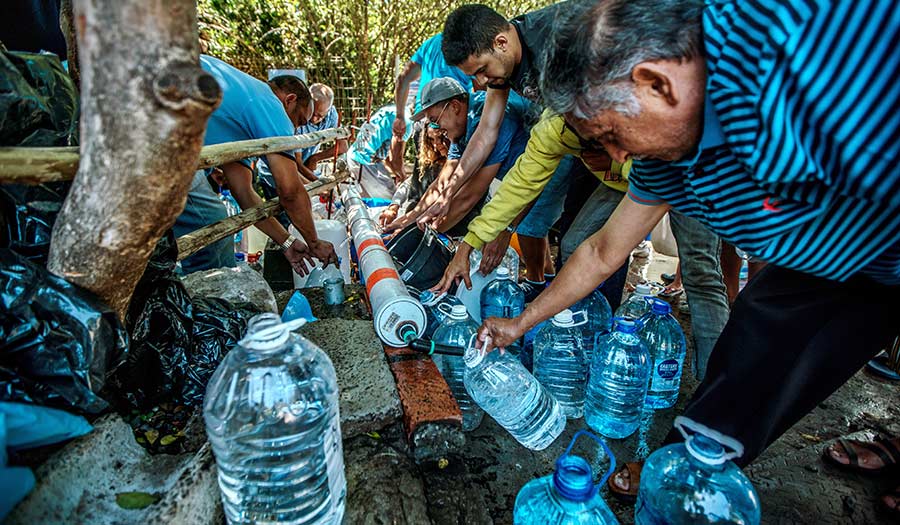 South Africa’s second-largest city and home to 4 million people could run out of water in May—the first major city to do so—amid the worst drought in more than a century.

Starting February 1, restrictions were put in place to limit each Cape Town resident’s daily water usage to 50 liters (13 gallons), or pay a penalty, until the city gets more rain. However, municipal officials said the seasonal rainfall expected to start in May is likely to be low.

“We have reached a point of no return,” a release by the Western Cape Government stated. “Despite our urging for months, 60% of Capetonians are callously using more than 87 litres per day [the previous cap for water use]. It is quite unbelievable that a majority of people do not seem to care and are sending all of us headlong towards Day Zero.”

The use of city drinking water to wash vehicles, hose down paved areas, fill up private swimming pools, and water gardens is illegal.

The crisis leading to Day Zero—the day the city will have to turn the taps off—has been spawned by a number of factors, according to The Economist.

“Cape Town has seen little rainfall in recent winters, when most of it comes. According to Piotr Wolski, a researcher with the University of Cape Town’s Climate Systems Analysis Group, the drought in the city’s water-catchment area between 2015 and 2017 was of a once-in-300-years magnitude. The city mayor, Patricia de Lille, has also blamed wasteful residents who fail to observe water-use limits. According to the city, only 41% of Capetonians complied with these targets when they stood at 87 litres of water per person per day.”

In addition, the city’s growth has meant more people have needed water, and supply has not kept up with demand.

“For years, Cape Town had been warned that it needed to increase and diversify its water supply,” The New York Times reported. “Almost all of its water still comes from six dams dependent on rainfall, a risky situation in an arid region with a changing climate. The dams, which were full only a few years ago, are now down to about 26 percent of capacity, officials say.”

From Cape Town’s elegant suburbs to its gritty townships, people have been working to reduce their water consumption. They restrict how often and how long they shower, wash clothes, and flush toilets to conserve water. Police are guarding some natural springs to avoid any scuffles over access to the increasingly precious liquid.

In the seaside town of Scarborough, resident Kelson da Cruz demonstrated to The Associated Press the new normal of water rationing, pointing out the bucket beside his shower. Everyone is working to change their habits in order to save water, said Mr. da Cruz.

“You can’t just take for granted something so precious.”

What will happen once the taps are turned off could result in nothing less than chaos.

“As Day Zero approaches, confusion is growing about how this waterless city might work,” The Economist continued. “Some city officials worry about the possibility of disease spreading in tandem with the reduction in hand-washing and basic hygiene. South Africa is already dealing with a serious outbreak of food-borne listeriosis. Many businesses will have to shut, though the city says it will keep water flowing to high-density business areas, as well as hospitals, schools and poor townships. Tourism to Cape Town, a bright spot in an otherwise sluggish South African economy, could suffer.”

Those who have money are leaving the city while others are purchasing as much water as they can while it is still available in stores, CNN reported.

“People were already rushing in and out of the shop to buy water,” Adele van der Spuy told the media outlet. “Some actually went in several times as we were only allowed to buy five boxes at a time.”

Ms. Van der Spuy told CNN “she has never witnessed anything like it before.”

“It is eye-opening, and an indication of the panic and also what lies ahead,” she said.