This website requires the use of Javascript to function correctly. Performance and usage will suffer if it remains disabled.
How to Enable Javascript
Mexico Murders Hit Record High in 2017 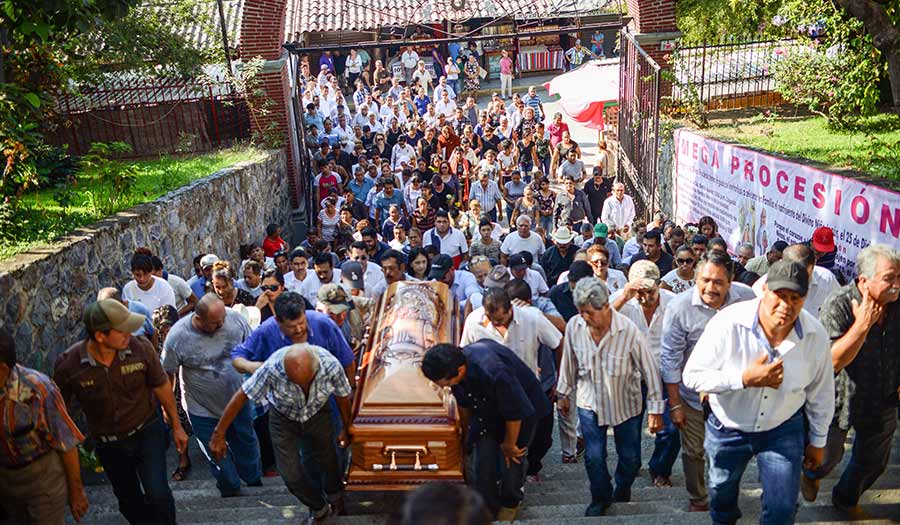 Francisco Robles/AFP/Getty Images
Relatives and friends of Arturo Gomez, a mayor of the Mexican community of Petatlan, carry his coffin a day after he was shot dead by an armed group while dining at a restaurant (Dec. 29, 2017).

More than 25,000 people were murdered in Mexico in 2017, the most since government records were first kept in 1997, as the nation’s violent drug wars continue.

The overall tally of homicide cases last year was 25,339 according to the data—a 23 percent increase from 2016. The spike in murders comes after a nationwide crackdown on Mexico’s largest drug cartels, which had resulted in a decline in killings from 2012 to 2014.

However, the breakup of larger criminal organizations, including that of drug lord “El Chapo” who was arrested in 2014, gave rise to smaller groups that are seeking to reclaim territory once held by the larger cartels.

“Breaking up the cartels also has the perverse effect of encouraging crime groups to diversify, said Brian J. Phillips, professor at the Centre for Teaching and Research in Economics,” The Guardian reported.

“The new groups are more likely to raise money by kidnapping or extortion since that doesn’t require the logistics of drug trafficking,” Mr. Phillips told the media outlet. “And as long as demand exists in the USA, and supply is in or passing through Mexico, new criminal organisations will appear.”

The statistics deal a major political blow to President Enrique Pena Nieto, who pledged when he was inaugurated to control gang violence by targeting cartel kingpins. Though Mr. Pena Nieto has reached his term limit, his failure to quell the nation’s deadly violence threatens to derail chances that his centrist Institutional Revolutionary Party will retain legislative seats after presidential elections on July 1.

In May of 2017, the International Institute for Strategic Studies proclaimed that Mexico was more violent than war zones, including Afghanistan and Yemen. In the 11 years since the Mexican government declared war on drug cartels, more than 200,000 people have been killed and about 30,000 have gone missing.