This website requires the use of Javascript to function correctly. Performance and usage will suffer if it remains disabled.
How to Enable Javascript
Ocean Dead Zones Have Quadrupled Since 1950

Ocean Dead Zones Have Quadrupled Since 1950 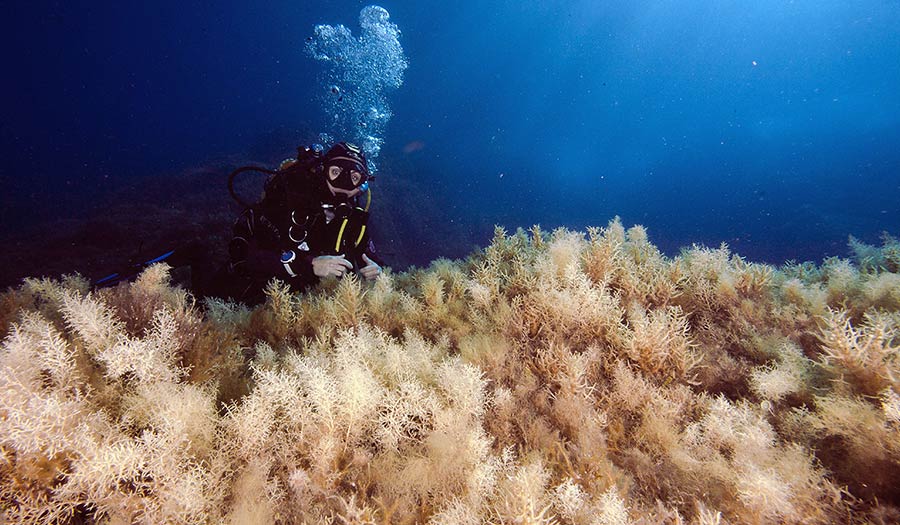 A diver observes filamentous algae—which sucks oxygen out of the water and kills wildlife—in the National Park of Port-Cros in the Mediterranean Sea, near the island of Porquerolles in France (June 24, 2015).

Fertilizers, sewage runoff, and rising water temperatures have suffocated the ocean and caused the number of dead zones in it to quadruple since 1950—with oxygen-deprived areas along the coastline growing tenfold, according to an analysis published in the journal Science.

While increased pollution is concerning by itself, scientists say the uptick in dead zones has the potential to collapse the entire oceanic ecosystem.

“The oxygen content of the open ocean and coastal waters has been declining for at least the past half-century, largely because of human activities that have increased global temperatures and nutrients discharged to coastal waters,” the analysis stated. “These changes have accelerated consumption of oxygen by microbial respiration, reduced solubility of oxygen in water, and reduced the rate of oxygen resupply from the atmosphere to the ocean interior, with a wide range of biological and ecological consequences.”

Additional nutrients can “cause an overgrowth of algae which consumes oxygen,” according to The Weather Channel, and that in turn these “oxygen-deprived areas leave sea life unable to breath and can cause massive fish kills.”

“Oxygen is fundamental to biological and biogeochemical processes in the ocean,” the report in Science further stated. “Its decline can cause major changes in ocean productivity, biodiversity, and biogeochemical cycles. Analyses of direct measurements at sites around the world indicate that oxygen-minimum zones in the open ocean have expanded by several million square kilometers and that hundreds of coastal sites now have oxygen concentrations low enough to limit the distribution and abundance of animal populations and alter the cycling of important nutrients.”

More than half a billion people rely on the ocean for food and 350 million use it to make a living, according to The Weather Channel, so the potential that the oceanic ecosystem could collapse is of huge concern.

“Major extinction events in Earth’s history have been associated with warm climates and oxygen-deficient oceans,” Denise Breitburg, who led the analysis, stated in the Guardian: “Under the current trajectory that is where we would be headed. But the consequences to humans of staying on that trajectory are so dire that it is hard to imagine we would go quite that far down that path.”