This website requires the use of Javascript to function correctly. Performance and usage will suffer if it remains disabled.
How to Enable Javascript
U.S. Hit Hard by Early Flu Season 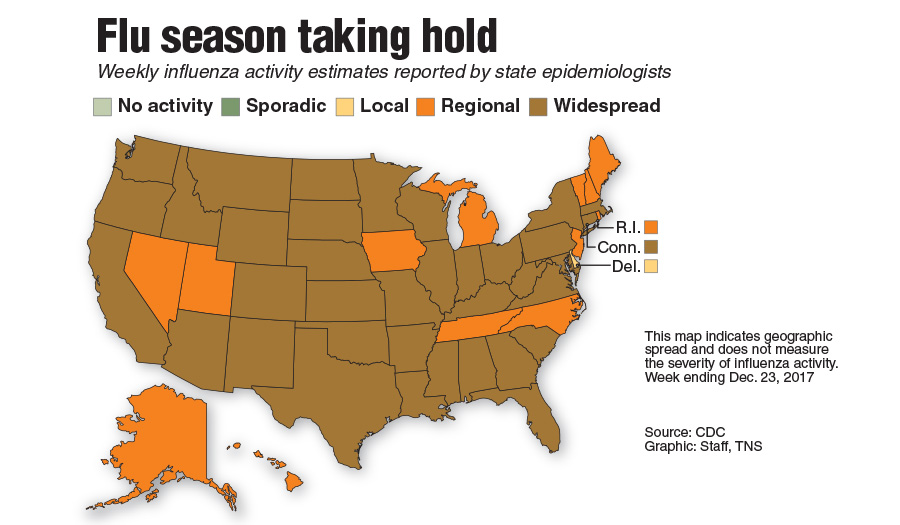 Bitter cold temperatures and record snowfall across the United States have helped spread the influenza virus early this winter.

According to the U.S. Centers for Disease Control and Prevention, 36 states have reported widespread influenza activity by late-December. There have been more than 13,400 confirmed cases since October 1.

“It’s just one of those years where the CDC is seeing that this strain of flu is only somewhat covered by the vaccine that was given this year,” Jennifer Radtke, manager for infection prevention at the University of Tennessee Medical Center in Knoxville, told USA Today. “They’re seeing that it’s anywhere from 10% to 33% effective, so any time there’s a mismatch between the vaccine and the circulating strain of the flu, you’re going to see more cases.”

According to the CDC, the flu shot usually decreases the chance of illness by about 50 percent.

A number of states reported deaths caused by the flu. In North Carolina, 12 people including one child died. At least seven people over the age of 65 in South Carolina and at least 10 in California younger than 65 have died from the virus.

Influenza symptoms usually include a fever, fatigue, a cough, and a sore throat, and typically pass within a few days. Yet the virus can be deadly for the elderly, children and those with respiratory problems. It can also develop into pneumonia for those with weaker immune systems.