This website requires the use of Javascript to function correctly. Performance and usage will suffer if it remains disabled.
How to Enable Javascript
3 Months After Maria, Half of Puerto Rico Without Power

3 Months After Maria, Half of Puerto Rico Without Power 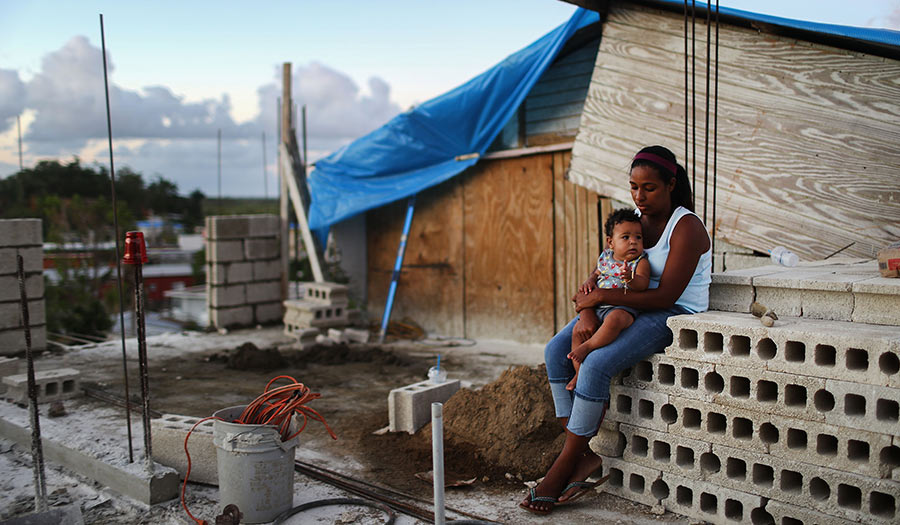 Mario Tama/Getty Images
A mother holds her 9-month-old baby at their home under reconstruction after being mostly destroyed by Hurricane Maria, in San Isidro, Puerto Rico (Dec. 23, 2017).

In the central Puerto Rico town of Morovis, 30,000 people are still without electricity. Two times each week, The Associated Press reported, townspeople stand for hours in line for rations: 24 bottles of water and a cardboard box of basic foods including tortillas, canned vegetables, and cereal.

These are just a few of many on the island still without power three months after Hurricane Maria pummeled the U.S. territory, killing more than 1,000 people and decimating the electric grid. According to a December 11 study by local engineers, half of Puerto Rico’s 3.3 million residents are still without power.

The U.S. Army Corps of Engineers reported that electricity will likely not be restored to all of the island’s residents until May.

Commander of the Corps’ South Atlantic Division, Brigadier General Diana Holland, told Military.com, “There is a long way to go,” adding that the Corps’ Puerto Rico mission “has already surpassed every other post-hurricane experience in our history.”

Other services on the island have yet to be fully restored, although they have recovered more quickly than the power grid. According to a Puerto Rico government report, 12 percent of gas stations, 8 percent of supermarkets, and 11 percent of bank branches are still closed. Thirteen percent of homes do not have running water.