This website requires the use of Javascript to function correctly. Performance and usage will suffer if it remains disabled.
How to Enable Javascript
Opioid Epidemic Fueling HIV, Hepatitis Outbreaks 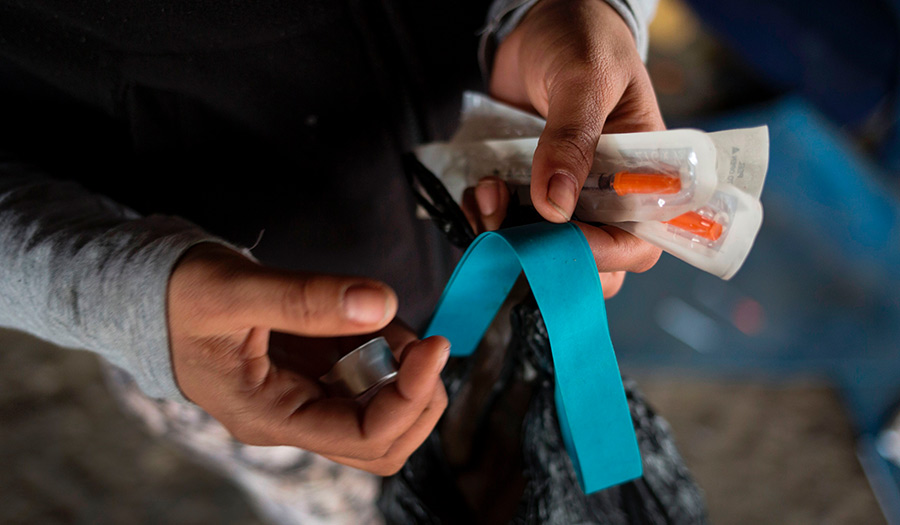 Dominick Reuter/AFP/Getty Images
A homeless heroin addict shows her kit of clean needles, mixing cap and tourniquet in the Kensington neighborhood of Philadelphia, Pennsylvania (April 14, 2017). She spends her nights trying to keep warm on a mattress under a bridge, the very spot where she was raped and infected with HIV.

Health officials fear that an increase in HIV cases among injecting drug users in enclaves nationwide could be an early sign of a resurgence of the virus—despite decades of successful efforts to stop it from spreading.

Already this year in Massachusetts, 78 people who inject drugs were diagnosed with HIV—double the number of those who were infected last year among the same group.

“This is likely to be an early signal of a potential outbreak. And we really need to address it right now,” Dr. Alfred DeMaria, medical director of the Bureau of Infectious Disease and Laboratory Sciences at the state Department of Public Health, told The Boston Globe.

“It would be a little early to say we have an epidemic on our hands, but we’re primed for it,” Dr. Jenifer L. Jaeger, interim medical director of the Boston Public Health Commission, told the news outlet.

This year’s HIV uptick in Massachusetts is troubling considering the state has been the national leader in stopping the spread of HIV as the result of decades of policies and efforts.

Officials are concerned that Massachusetts could end up in the same situation as Scott County, Indiana. In 2015, one person there introduced the virus to drug users in the rural area and 180 became infected within four months—an area that previously had not registered more than five cases a year. The outbreak was partly due to what the CDC classified as “a multi-generational activity, with as many as three generations of a family and multiple community members injecting together.”

“This HIV outbreak involves a rural population, historically at low risk for HIV, in which HIV infection spread rapidly within a large network of persons who injected prescription opioids,” the health organization reported.

“Opana—which contains oxymorphone, an opioid more potent per milligram than Oxycontin—came into vogue about four or five years ago when Oxycontin’s makers reformulated that drug to make it harder to abuse,” The Indianapolis Star reported. “A few years ago, Endo Pharmaceuticals, the makers of Opana, took similar steps, but people have continued to find ways to transform Opana pills into an injectable high.”

Unlike Indiana, however, syringes are legally sold and distributed in Massachusetts, making it easier for injecting drug users to obtain clean ones. Also, nearly everyone in the state has health insurance.

But the latest HIV uptick threatens to reverse this progress.

Opioid use is a major problem in Massachusetts, with five people a day dying from drug overdoses. Experts believe that fentanyl is partly to blame. The synthetic drug is increasingly favored by opioid users because it provides a more intense high than heroin. Yet it wears off more quickly and users tend to inject more frequently, thus increasing the chances they can contract HIV.

Yet Massachusetts is not the only state struggling with an increased risk of HIV. West Virginia also experienced an outbreak earlier this year.

Dr. Gupta said that while only a few of the people who were involved supposedly injected drugs, the agency “wanted to make sure that we are aggressively addressing this particular outbreak in order to prevent an IV drug use-related outbreak.”

One in 302 West Virginians will be diagnosed with HIV in his or her lifetime and “the state ranks No. 1 in incidence of acute hepatitis B and hepatitis C, which are also transmitted by needle sharing, according to the DHHR.”

Last year, the CDC published a list of the 220 counties that had the highest level of HIV epidemic risk, some of which are starting to see an increase in HIV and hepatitis cases.

“Of the 220 counties—out of more than 3,100 in the U.S. and including Scott County—most are rural; 56% are in Kentucky, Tennessee and West Virginia, in the Appalachian region hardest-hit by the opioid crisis. The remainder are scattered across 23 other states, from California to Maine,” The Wall Street Journal reported.

In just the Cincinnati area of Ohio, the report said five counties could be affected, cinncinnati.com explained.

“An HIV outbreak linked to heroin and other injected drugs could hit five counties in the Cincinnati region, a new federal analysis warns. The counties are home to roughly 220,000 people, or 1 of every 10 of the region’s nearly 2.2 million residents.”

The outlet further stated, “The size of the threat to the Cincinnati region is underscored by the fact that 33 percent of its counties are on the list, compared to only 7 percent nationally.”

Tennessee has also been affected.

Even states with lower HIV numbers are concerned. Health officials in Pennsylvania, which has seen its percentage of new cases of the virus steadily drop since 2012, are on high alert.

“In 2014, the most recent year for which data is available, IV drug use accounted for 5 percent of Pennsylvania’s 1,210 new HIV cases, the third biggest cause that year,” PennLive reported.

“But the continued growth of drug use and limited access to clean needles in the most rural corners of the state means related concerns have not diminished.

“This as hepatitis C infections related to the rise in heroin and injection drug use grew by 150 percent from 2010 to 2013.”

Even Vermont—home to slightly over 600,000 people—could be at risk, a CDC report analyzing the lifetime risk of HIV by state said that 1 in 527 people could contract it.

Despite this number, state epidemiologist Patsy Kelso told The Wall Street Journal that “honestly, I think the whole state is at risk.”

The paper reported that “HIV rates are relatively stable in Vermont, yet hepatitis C cases have risen significantly in the past few years.”

According to a CDC fact sheet, “roughly 1.2 million people in the United States are living with HIV—and nearly one in eight of those are not aware that they are infected.”

And along with the possibility of HIV infections is the risk of contracting hepatitis C.

“Both HIV and HBV (Hepatitis C) spread in semen, blood, or other body fluids,” the U.S. Department of Health and Human Services (DHHS) explained on their website. “Therefore, the main risk factors for HIV and HBV are the same: unprotected sex (sex without a condom) and injection drug use.

“According to the Centers for Disease Control and Prevention (CDC), approximately 10% of people with HIV in the United States also have HBV. Infection with both HIV and HBV is called HIV/HBV coinfection.”

HIV attacks and destroys the immune system of infected persons, according to the DHHS. This makes it “difficult for the body to fight infections and certain cancers.”

In addition, the organization stated: “Although acquired immune deficiency syndrome (AIDS) diagnoses among PWID have decreased approximately 90% since their peak in 1993, and only an estimated 0.3% of the U.S. population has injected drugs in the past 12 months, approximately 9% of HIV infections diagnosed in recent years are among PWID. Although HIV diagnoses among PWID have decreased over time, recent increases in acute hepatitis C virus (HCV) infections, which are frequently associated with injection drug use, suggest this progress could be negatively affected by increases in opioid and heroin use.”

While many people think of larger cities such as New York or Philadelphia as hotbeds of the HIV epidemic, especially in the 1980s, many health officials believe the fight has moved to rural America.

While “HIV remains mainly an urban disease, most individuals diagnosed in 2014 were residing in areas with 500,000 or more people. Areas hardest hit (by ranking of HIV cases per 100,000 people) include Baton Rouge and New Orleans, La.; Jackson, Miss.; Miami and Orlando, Fla.-CDC.”

In the last few years, a rise in overdose deaths from opioids in specifically rural areas has fueled the concern. Many people in rural areas are much less likely to seek treatment—if it is even available—and “include some of the most vulnerable populations for injection drug use and injection drug use–related HIV outbreaks and might have the greatest unmet need for risk reduction services provided by [syringe services programs],” according to the CDC.

“The time for discussion is dwindling,” Dr. Michael Brumage, executive director of the Kanawha-Charleston Health Department in West Virginia told the Charleston Mail-Gazette. “For me, this increase in the number of HIV cases is a call to action.”

“It only takes one patient sharing needles with active HIV to infect others, and that is exactly how Scott County, Indiana, began with their problems,” he further stated. “Many people will say, ‘So what if IV drug users get HIV or [hepatitis] C or [hepatitis] B. Why does that concern me?’ The trouble is that, of course, it doesn’t stop in that population. It spreads.”