This website requires the use of Javascript to function correctly. Performance and usage will suffer if it remains disabled.
How to Enable Javascript
Australia Makes Biggest Meth Bust in Its History 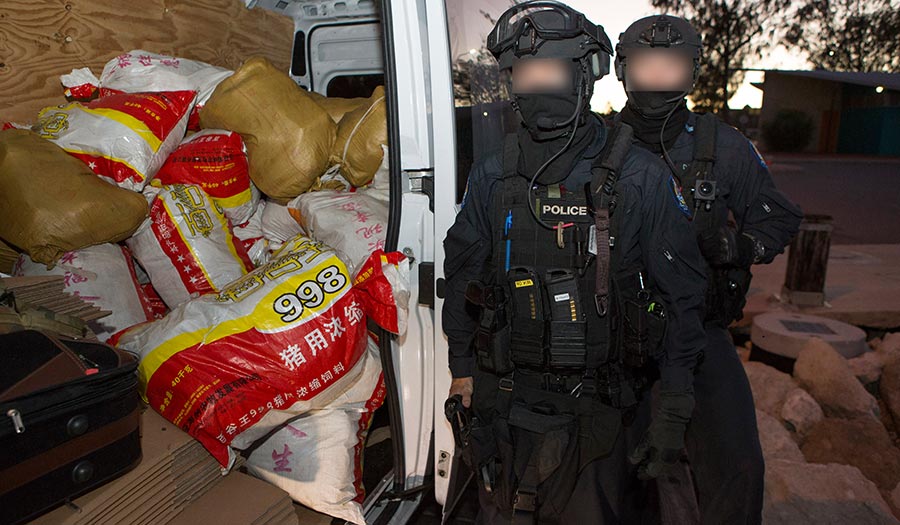 Australian Federal Police
Police, whose faces are blurred, stand next to over one ton of confiscated methamphetamines in Geraldton, Australia (Dec. 21, 2017).

Australian law enforcement officers seized 1.3 tons of methamphetamine at the Port of Geraldton on the nation’s west coast—making it the largest meth bust in its history.

Fifty-nine bags containing approximately 44 pounds of methamphetamine each were seized from a vehicle. An additional bag was found on a nearby boat. The drugs have a combined street value of $802 million.

Eight men have been charged in the crime, and the offences carry a maximum penalty of life imprisonment.

The bust was organized by the Western Australian Joint Organized Crime Task Force, which includes the Australian Federal Police (AFP) and the Australian Border Force, among other local and federal organizations.

“The success of this operation is a testament to the patience and dedication of our investigators, who have been working around the clock in the lead-up to Christmas to disrupt this record importation,” said AFP Deputy Commissioner of Operations Leanne Close.

Citing National Wastewater Drug Monitoring results, ABC News reported that “the haul would have been enough to feed the meth appetite of the entire country for two months.”