This website requires the use of Javascript to function correctly. Performance and usage will suffer if it remains disabled.
How to Enable Javascript
Ukraine War Escalates After Russia Leaves Cease-fire Group 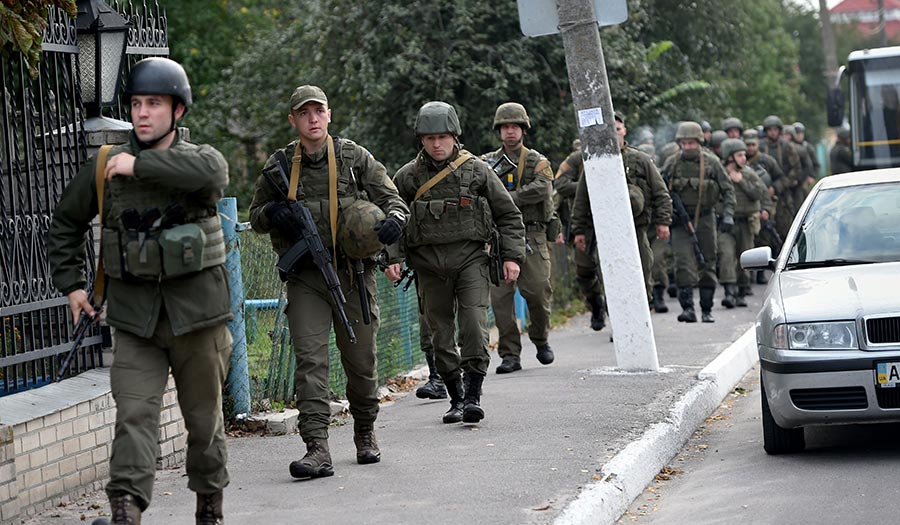 Sergei Supinsky/AFP/Getty Images
National guard servicemen patrol the streets after the evacuation of the town of Kalynivka, Ukraine, following explosions at a nearby arms depot (Sept. 27, 2017). Ukrainian authorities called the explosion an act of “sabotage.”

International observers are raising the alarm about the war in rebel-held eastern Ukraine. Intensified clashes this week have been the heaviest fighting in nearly a year. Ukrainian authorities linked the escalation to Russia’s decision to withdraw its military observers from a joint group monitoring the truce in eastern Ukraine.

Ertugrul Apakan, chief monitor of the special monitoring mission for eastern Ukraine at the Organization for Security and Cooperation in Europe, told reporters on December 19 that the number of cease-fire violations increased by 35 percent in the past week compared to a week earlier.

Local media reported intense shelling and damage to properties on both lines of the conflict this week.

The U.S. special envoy for the Ukraine conflict Kurt Vogel called 2017 the deadliest year in the region since the conflict began three years ago.

“A lot of people think that this has somehow turned into a sleepy, frozen conflict and it’s stable and now we have…a cease-fire,” Mr. Volker said in a December 9 speech in Washington. “That’s completely wrong. It is a crisis. This has been the most violent year, 2017, and frankly last night was one of the most violent nights, certainly since February, and possibly this year.”

Fighting between Russia-backed separatists and government troops in eastern Ukraine has killed more than 10,000 since 2014. Peace accords brokered by Russia, France and Germany in 2015 helped to decrease the intensity of the fighting but did not stop it altogether.

Spokesman for Germany’s Foreign Ministry Rainer Breul voiced concern about Russia’s move to withdraw its military officers from the monitoring group, warning that it could have “significant consequences for the civilian population in conflict areas of eastern Ukraine.”

Mr. Breul told reporters in Berlin that the Joint Center on Control and Coordination plays an important role in facilitating and monitoring local cease-fires, allowing for mine clearance and maintenance on vital infrastructure.

Berlin urged both sides to find a solution to ensure the monitoring group can operate. It also called on all sides to strengthen the fragile cease-fire and “reduce human suffering.”