This website requires the use of Javascript to function correctly. Performance and usage will suffer if it remains disabled.
How to Enable Javascript
Latin America Burdened by Venezuelans Fleeing Hunger and Hyperinflation 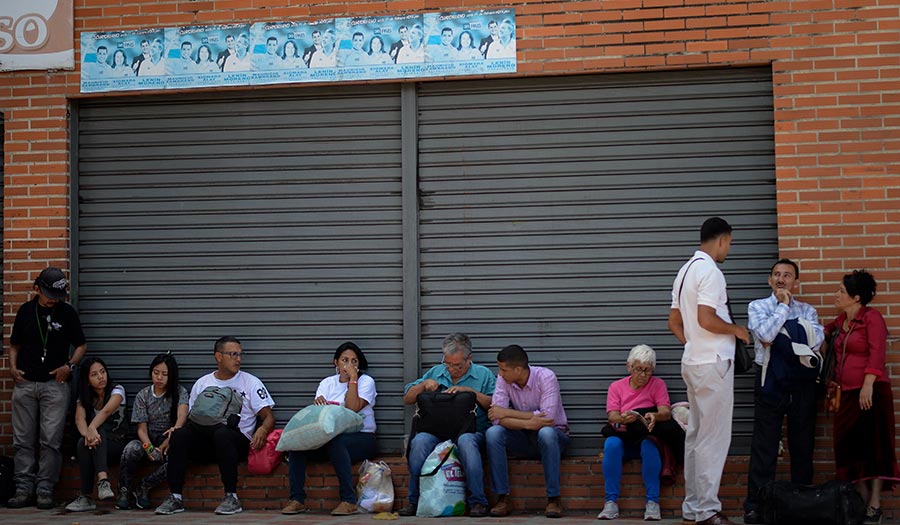 Federico Parra/AFP/Getty Images
People wait to board a bus in Caracas as hundreds of disappointed Venezuelans who see no end to the crisis choose to leave the country (Oct. 11, 2017).

Since Hugo Chavez’s “socialist revolution” in 1999, Venezuelans began trickling out of the country, many to richer nations such as the United States and Spain.

As living conditions have become increasingly dire—hyperinflation, lack of food, medicine shortages, political uncertainty, and one of the worst homicide rates in the world—more citizens are abandoning their homeland than ever before.

“For the first time, Venezuela is producing rather than receiving migrants,” Tomas Paez, a Caracas-based sociologist, told The Guardian. It is estimated that the Venezuelan diaspora is 1.1 million, which represents more than 4 percent of native-born Venezuelans. The true figure, however, is unknown because the country stopped publishing official numbers years ago.

This is a far cry from 1970s and 80s, when the oil-rich nation provided a haven for millions of migrants from Colombia, which was enduring a rebel insurgency.

Today, hundreds of thousands of inflation-weary Venezuelans are streaming into neighboring Colombia and nations from Mexico to Argentina, “often putting pressure social services that are unprepared to accommodate an increase of migrants,” the British news outlet stated.

USA Today reported that in Panama “the flood of citizens from the much larger neighbor now competing for jobs has stoked nationalistic sentiment, said Harold Trinkunas, an international security expert at Stanford University who grew up in Venezuela. Panama responded by tightening visa requirements.”

According to The Guardian: “In small Caribbean countries, the Venezuelans’ arrival has had a greater impact, said Charlotte Ridung, UNHCR’s senior protection adviser for the Venezuelan situation. Trinidad and Tobago, a country of 1.3 million, has received 40,000 Venezuelans. Similar situations in Panama and the Dominican Republic have reportedly led to Venezuelans being harassed and told to ‘go home’ by local citizens.”

But for refugees such as Patricia Acosta, who fled to Peru and works for the Spanish telecom Telefonica, Venezuelans are simply seeking to rebuild their lives.

“I want to go back and help lift my country up again, but I am at an age where I want to be established and have a family,” Ms. Acosta told USA Today. “This really hurts. Venezuelans don’t have a culture of emigration. The expectation is that grandparents will see their grandkids growing up.”