This website requires the use of Javascript to function correctly. Performance and usage will suffer if it remains disabled.
How to Enable Javascript
FCC Reverses Net Neutrality Rules Amid Storm of Debate 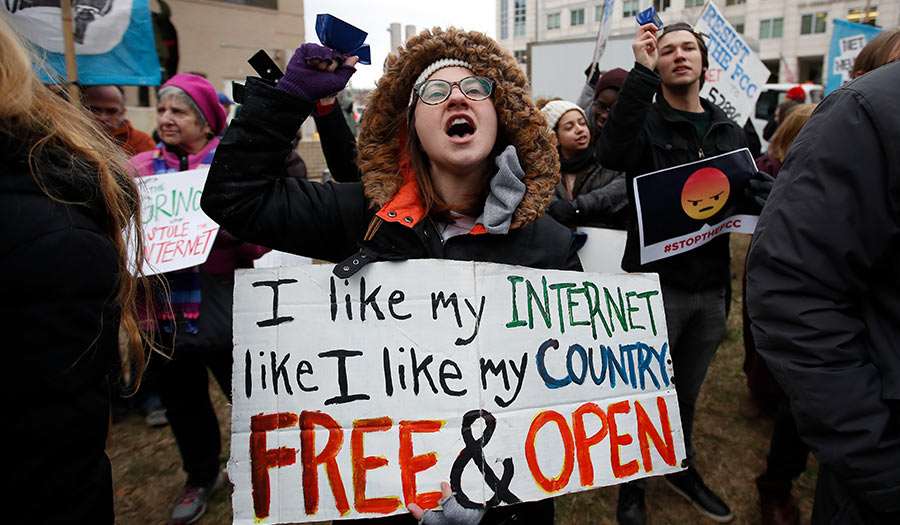 The Federal Communications Commission repealed the Obama-era “net neutrality” rules December 14, lifting restrictions on internet service providers like Verizon, Comcast and AT&T against potentially slowing or blocking websites and apps as they see fit or charge more for faster speeds.

In a straight party-line vote of 3-2, the Republican-controlled FCC reversed the 2015 ruling that reclassified internet service providers as “common carriers” under Title II of the Communications Act of 1934. Title II bans “any unjust or unreasonable discriminations in charges, practices, classifications, regulations, facilities, or services.”

Telecommunications companies had lobbied hard to overturn the rules, contending they are heavy-handed and discourage investment in broadband networks.

“What is the FCC doing today?” asked FCC chairman Ajit Pai. “Quite simply, we are restoring the light-touch framework that has governed the internet for most of its existence.”

The reversal of net neutrality rules has stirred fears among consumer advocates, web companies, and some Americans afraid that cable and phone giants will be able to control what people see and do online. But the broadband industry has promised that the internet experience for the public is not going to change.

The FCC vote is unlikely to be the last word. Net neutrality supporters threatened legal challenges, with New York’s attorney general vowing to lead a multistate lawsuit. Some Democrats want to overturn the FCC action in Congress.

“The fact that Chairman Pai went through with this, a policy that is so unpopular, is somewhat shocking,” said Mark Stanley, a spokesman for the civil liberties organization Demand Progress.

On the day of the vote, about 60 demonstrators gathered in the bitter chill of Washington to protest the FCC’s expected decision. Just before the vote, the hearing room was briefly evacuated and searched after a bomb threat.

For months leading up to the vote, Congress and the FCC received hundreds of thousands of phone calls and millions of comments voicing concern. Yet New York Attorney General Eric Schneiderman, a Democrat, has been investigating what appear to be large numbers of fake public comments submitted to the FCC during the net neutrality comment period. He said 2 million comments were submitted under stolen identities, including those of children and dead people.

On one side of the debate are those who fear that the Comcasts and AT&Ts of the world could slow down or block access to services they do not like or happen to be in competition with. They say they could also charge higher fees of rivals and make them pay up for higher transmission speeds. Companies would have to post such policies online or tell the FCC.

Such restrictions have happened before. In 2007, for example, The Associated Press found that Comcast was blocking or throttling some file-sharing. And AT&T blocked Skype and other internet calling services on the iPhone until 2009.

Angelo Zino, an analyst at CFRA Research, said he expects AT&T and Verizon to be the biggest beneficiaries because the two internet giants can now give priority to the movies, TV shows, and other videos or music they provide to viewers. That could hurt rivals such as Sling TV, Amazon, YouTube or startups yet to be born.

However, AT&T senior executive vice president Bob Quinn said in a blog post that the internet “will continue to work tomorrow just as it always has.” He said the company will not block websites and will not throttle or degrade online traffic based on content.