This website requires the use of Javascript to function correctly. Performance and usage will suffer if it remains disabled.
How to Enable Javascript
Congo Rebels Attack UN Peacekeepers, Deadliest in 25 Years 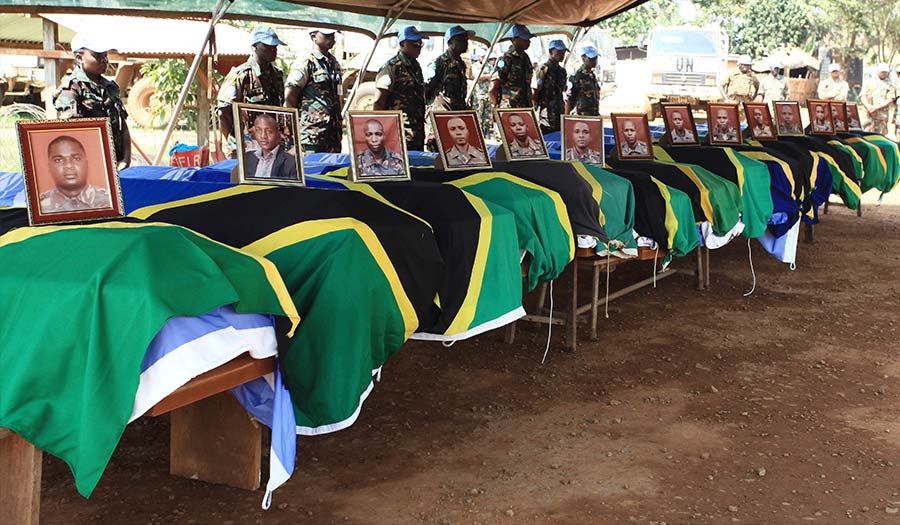 The bodies of 14 United Nations peacekeepers killed last week in eastern Congo arrived home in Tanzania on December 11, as a UN official vowed military offenses will be launched against rebels who carried out the attack.

According to the UN Operations and Crisis Center, 44 others were wounded and one peacekeeper remains missing.

The bodies were received in the commercial hub of Dar es Salaam by Tanzanian defense and military officials. The killings shocked many in this East African country that is known for its relative stability in a region often wracked by violence.

In a memorial ceremony, UN deputy special representative for Congo David Gressly said those who staged the assault will pay for their actions.

The December 7 attack, about 28 miles from Beni, was the deadliest single attack on a UN peacekeeping mission since June 1993, when 22 Pakistani soldiers were killed in an attack in Somalia.

At least five Congolese soldiers also were killed in the assault, during which gunmen of the region’s deadliest rebel groups raided the UN base after nightfall and continued for hours. The peacekeeping base has been repeatedly attacked by rebels from the Allied Democratic Forces group in the past.

Tanzania’s ambassador in Congo, Paul Ignace Mella, called on the UN to protect its peacekeeping soldiers. The UN peacekeeping mission in Congo is the largest in the world.

The UN’s top official for peacekeeping operations, Jean-Pierre Lacroix, will travel to Congo to attend a memorial ceremony on December 14 to honor the slain peacekeepers. Later, Mr. Lacroix will head to Tanzania “to personally convey to the people and government of Tanzania the UN’s deep gratitude for the sacrifices of their men and women,” UN spokesman Farhan Haq said in New York.

Secretary-General Antonio Guterres condemned the assault and urged Congo authorities to bring justice to the attackers. “These deliberate attacks against United Nations peacekeepers are unacceptable and constitute a war crime,” the UN chief stated according to the organization’s website.

“There must be no impunity for such aggression, here or anywhere else.”

Congo, the size of Western Europe, has seen immeasurable cruelty and greed as a result of its mineral resources while more than 80 percent of the population lives below the absolute poverty line of $1.25 a day. The nation suffered through one of the most brutal colonial reigns ever known before enduring decades of corrupt dictatorship. Back-to-back civil wars later drew in a number of neighboring countries.

Many rebel groups have come and gone during the UN mission’s years of operation, at times invading the regional capital, Goma.