This website requires the use of Javascript to function correctly. Performance and usage will suffer if it remains disabled.
How to Enable Javascript
South Korea Performs Anti-terror Drills Ahead of Olympics 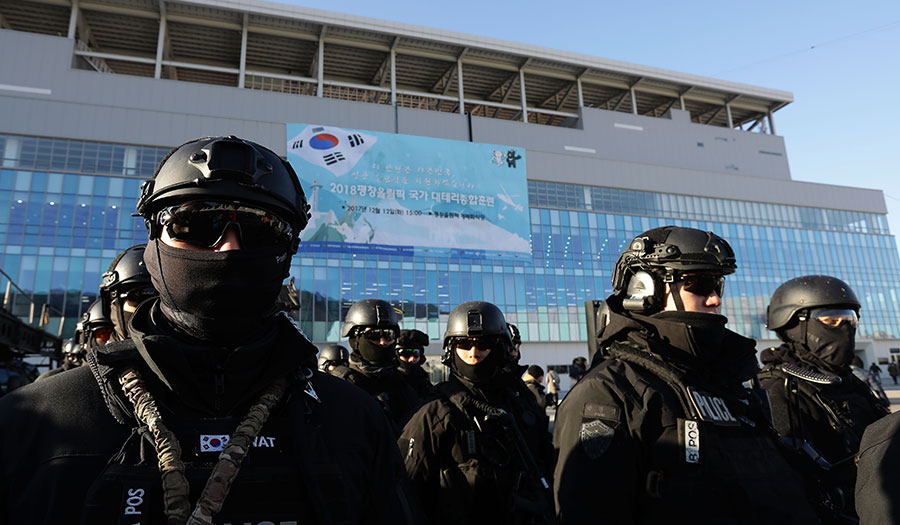 In less than two months, many thousands will flock to Pyeongchang, South Korea, for the 2018 Winter Olympics. The location is just 50 miles from the North Korean border.

The host nation conducted multiple security drills on December 12 to prepare for potential terror attacks against attendees and participants during the Games. Referred to as a “dress rehearsal,” the exercises included responding to a hostage situation and stopping both a weaponized vehicle and drone.

According to Reuters, “Police and firemen were among around 420 personnel participating in the exercise, held in front of the Olympic Stadium at Pyeongchang.”

“During the simulated drills, a SWAT team shot down a drone with a bomb attached that was flying toward a bus carrying athletes.”

“In another part of the mock exercise,” the outlet continued, “a terrorist took hostage athletes on a bus, and tried to ram the vehicle into the stadium before being gunned down by police. Officers in gas masks also removed a chemical bomb.”

The Winter Games will take place as tensions between North Korea and the world are at heightened levels. Pyongyang’s frequent missile tests and stinging rhetoric about its nuclear capability has several nations, including the U.S., Japan and other United Nations members, on edge.

On December 6, U.S. Ambassador to the UN Nikki Haley cast doubt on America’s participation in the Games when she responded that the situation was an “open question.” This came in response to the question of whether the U.S. would send its athletes given tensions in the region.

The following day, the White House clarified in a tweet: “U.S. looks forward to participating in the Winter Olympics in South Korea. The protection of Americans is our top priority and we are engaged with the South Koreans and other partner nations to secure the venues.”

South Korean Prime Minister Lee Nak-yon did not mention North Korea in comments about the drill. However, according to Reuters, the South’s Defense Ministry flagged risks that North Korea could resort to terrorist or cyberattacks to spoil international events.

Seoul government officials and documents reveal some 5,000 armed forces personnel will be deployed at the Winter Games.