This website requires the use of Javascript to function correctly. Performance and usage will suffer if it remains disabled.
How to Enable Javascript
California Braces for Second Week of Ferocious Wildfires 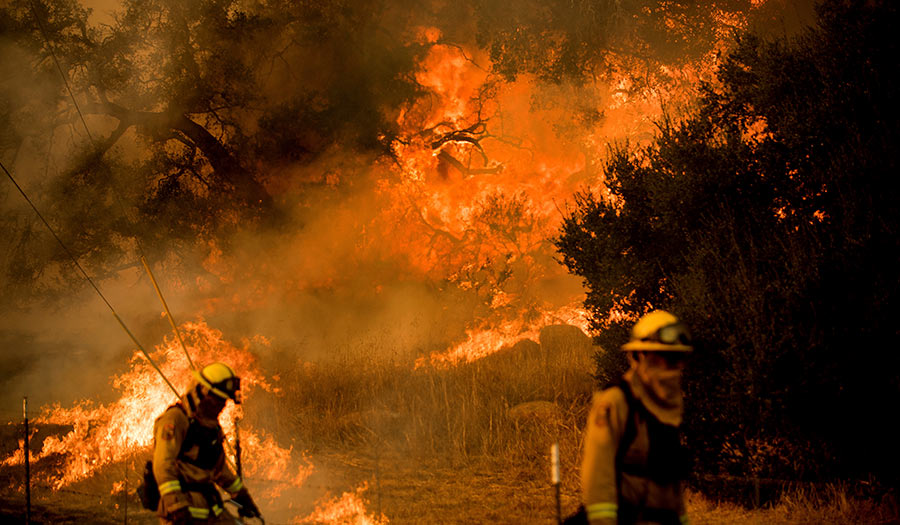 AP/Noah Berger
Firefighters light backfire while trying to keep a wildfire from jumping a road near Ventura, California (Dec. 9, 2017).

LOS ANGELES (AP) – Firefighters kept a wall of flames from descending mountains into coastal neighborhoods after a huge and destructive Southern California wildfire exploded in size, becoming the fifth largest in state history.

Tens of thousands remained under evacuation orders Monday as the fire churned west through foothill areas of Carpinteria and Montecito, seaside Santa Barbara County towns about 75 miles northwest of Los Angeles. Much of the fire’s rapid new growth occurred on the eastern and northern fronts into unoccupied areas of Los Padres National Forest, where the state’s fourth largest fire burned a decade ago.

Forecasters predicted that dry winds that fanned several fires across the region for a week would begin to lose their power Monday. Light gusts were pushing onshore, driving the flames back up hillsides and away from communities, Santa Barbara County Fire spokesman Mike Eliason said. But the possibility of “unpredictable” gusts would keep firefighters on edge for days, he said.

Santa Ana winds have long contributed to some of the region’s most disastrous wildfires. They blow from the inland toward the Pacific Ocean, speeding up as they squeeze through mountain passes and canyons.

With the air thick with acrid smoke, even residents of areas not under evacuation orders took the opportunity to leave, fearing another shutdown of U.S. 101, a key coastal highway that was closed intermittently last week. Officials handed out masks to residents who stayed behind in Montecito, the wealthy hillside enclave that’s home to many film and television stars.

Smoke shrouded the home of one actor who wore a mask as he livestreamed his family leaving on Sunday.

“Praying for the people in my area,” he said on Instagram. “Hope everybody’s getting out safe like we are, and thanks for the prayers and thoughts. And good luck to the firefighters, we need you!”

Meanwhile, containment increased on other major blazes in Los Angeles, Riverside and San Diego counties. Resources from those fires were diverted to the Santa Barbara foothills to combat the stubborn and enormous fire that started December 4.

Fires are not typical in Southern California this time of year but can break out when dry vegetation and too little rain combine with the Santa Ana winds. Though the state emerged this spring from a yearslong drought, hardly any measurable rain has fallen in the region over the past six months.

High fire risk is expected to last into January.

Despite the size and number of wildfires burning in the region, there has only been one confirmed death: The death of a 70-year-old woman, who crashed her car on an evacuation route, is attributed to the fire in Santa Paula, a small city where the Thomas Fire began.

Most of last week’s fires were in places that burned in the past, including one in the ritzy Los Angeles neighborhood of Bel-Air that burned six homes and another in the city’s rugged foothills above the community of Sylmar and in Santa Paula.