This website requires the use of Javascript to function correctly. Performance and usage will suffer if it remains disabled.
How to Enable Javascript
Pope’s Views Stir Catholic Leaders 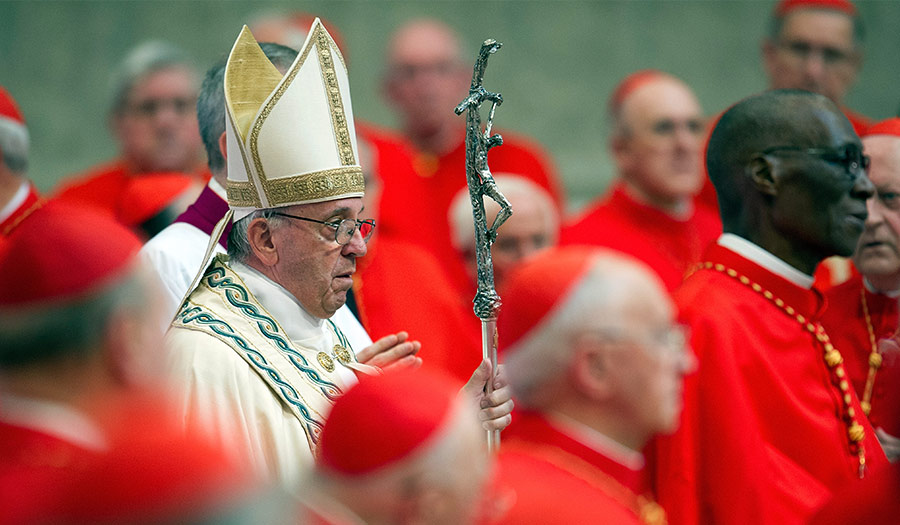 Pope Francis is again making waves in the Catholic Church. Numerous leaders claim he is spreading heresy by emphasizing that faithful Catholics must follow their consciences over hard and fast Catholic rules that have been in place for centuries.

In November, Francis affirmed the need to use one’s conscience to navigate tough moral questions. He did so in a video message to a conference organized by Italian bishops about his controversial 2016 document on family life, “The Joy of Love.”

Since its release, the document has badly divided the Catholic Church. Some commentators warned that it risks creating a schism given its opening to divorced, civilly remarried, and unmarried cohabiting Catholics. Church teaching holds that unless these Catholics obtain an annulment—a church decree declaring their first marriage invalid—they cannot receive the sacraments since they are seen as committing adultery in the eyes of the church.

Following its publication, four prominent cardinals formally asked for a clarification to five “dubia,” or doubts, they said had been spawned by the document.

In August, the group of traditionalist and conservative priests and scholars who formally accused Francis of spreading heresy issued a 25-page “Filial Correction” to the pope. The document stated that he has “effectively upheld 7 heretical positions about marriage, the moral life, and the reception of the sacraments, and has caused these heretical opinions to spread in the Catholic Church.”

The last time such actions were taken was in the Middle Ages, when “Pope John XXII was admonished in 1333 for errors which he later recanted on his deathbed,” the group wrote in a press statement. The letter, which was posted on their website, had been signed by 62 clergy (including one bishop) and lay scholars from 20 countries as of this writing.

Cardinal Gerhard Mueller, whom Francis recently removed as the Vatican’s chief doctrinal watchdog, did not join the four “dubia” cardinals or the heresy accusers. But he warned in a recent book preface that “schismatic temptations and dogmatic confusion” had been sown as a result of the debate over the document. He said such confusion was “dangerous for the unity of the church.”

This is not the only time that the pope has been accused of being divisive. His positions of who should be considered sinners and who should not have caused controversy during his last four years as leader of the world’s approximately 1.2 billion Catholics.

“Francis, the first non-European pope in modern times, and the first ever Jesuit pope, was elected as an outsider to the Vatican establishment, and expected to make enemies,” The Guardian stated. “But no one foresaw just how many he would make. From his swift renunciation of the pomp of the Vatican, which served notice to the church’s 3,000-strong civil service that he meant to be its master, to his support for migrants, his attacks on global capitalism and, most of all, his moves to re-examine the church’s teachings about sex, he has scandalised reactionaries and conservatives.”

While certain Catholic leaders have been vocal about the pope’s changing views of the church’s role, others have and continue to view the shift in Catholic philosophy as part of the religious process.

“Doctrine develops,” German Cardinal Reinhard Marx told reporters at a 2014 Vatican press conference reported on by the National Catholic Reporter. “Saying that doctrine will never change is a restrictive view of things.”