This website requires the use of Javascript to function correctly. Performance and usage will suffer if it remains disabled.
How to Enable Javascript
Herbicides: Helpful or Harmful? 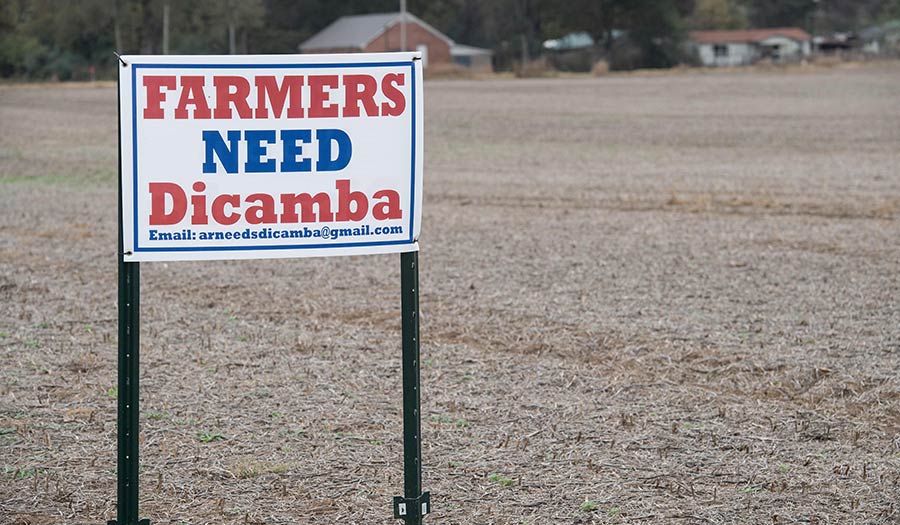 Nicholas Kamm/AFP/Getty Images
A sign supporting the use of the herbicide dicamba stands in a field in Gregory, Arkansas (Nov. 7, 2017).

A new chemical is being added to the herbicide debate: dicamba.

An Arkansas regulatory panel recently voted to ban use of the weed killer for part of next year after it drew complaints from farmers across several states who say unintended drift of the chemical has caused widespread damage to their crops. The state approved a temporary ban earlier this year on dicamba’s sale and use, and has received nearly 1,000 complaints this year about the herbicide.

Farmers have also complained about dicamba causing damage on their crops in other states, including Mississippi, Missouri, North Dakota, and Tennessee. Missouri banned the use and sale of three dicamba-based herbicides in July but lifted the ban within a week after approving new labels and restrictions for its use.

Dicamba has been used for decades to kill weeds, but farmers have more recently been able to spray it over widespread areas since soybeans and cotton seeds have been engineered to resist the herbicide. This has caused more of the chemical to spread to neighboring fields with conventional crops not engineered to resist it.

“I think that this has caused farmer to turn against farmer and people in the community not trusting the farmers near their yards, near their vegetable gardens,” Kerin Hawkins told The Associated Press. Her brother, Mike Wallace, was an Arkansas soybean farmer allegedly shot by a worker from a nearby farm where dicamba had been sprayed. “Everyone’s afraid of getting damage from this chemical,” she said.

Last month, the Environmental Protection Agency announced it had reached a deal with Monsanto along with BASF and DuPont, which also make dicamba herbicides, for new voluntary restrictions for the weed killer’s use. Under the deal, dicamba products would be labeled as “restricted use” beginning with the 2018 growing season, requiring additional training and certifications for workers applying the product to crops.

Dicamba is just one herbicide that has come under fire for its negative effects.

Another chemical—glyphosate—was debated in Brussels as members of the European Union struggled to agree on its continued use as one of the world’s most widely used weed killers, amid concerns about its possible links to cancer.

After months of dispute, EU member nations on November 27 voted to approve the extension of the license for the chemical to five years. Glyphosate is used in Roundup, the popular herbicide produced by the multinational agriculture company Monsanto.

Eighteen of the 28 member states that voted were in favor of the plan. Another one country abstained, and nine were against.

Despite the vote, many environmentalist groups and individual European countries are seeking to ban glyphosate, which the World Health Organization’s cancer agency said in 2015 is “probably carcinogenic to humans.”

The EU’s farmer’s union, on the other hand, wants a 15-year extension on its permitted use.

Glyphosate is so widely used that banning it outright would shake Europe’s agriculture sector to its foundations. Yet this prevalence has led to traces of the chemical being found in unexpected places.

“Glyphosate is a weedkiller so pervasive that its residues were recently found in 45% of Europe’s topsoil—and in the urine of three quarters of Germans tested, at five times the legal limit for drinking water,” The Guardian reported.

“Since 1974, almost enough of the enzyme-blocking herbicide has been sprayed to cover every cultivable acre of the planet. Its residues have been found in biscuits, crackers, crisps, breakfast cereals and in 60% of breads sold in the UK.”

The natural question becomes: Why use herbicides in the first place—especially if they have been shown to potentially harm people’s health?

The answer goes back to the need to produce more food with less money.

This dilemma led to the development of genetically modified organisms, or GMOs. They were introduced in the 1990s as a solution since they allowed farmers to grow more food with less hassle and less waste.

GMO seeds, which have been planted on half a billion acres across the world, are engineered to contain an immunity to weed-killing ingredients. In some cases, GMO seeds and the weed killers they are designed to resist are produced and sold by the same company.

These modified seeds, which are distributed throughout the world and grown everywhere, have led to increased yields for farmers and therefore increased profits.

“Currently, up to 92% of U.S. corn is genetically engineered (GE), as are 94% of soybeans and 94% of cotton (cottonseed oil is often used in food products),” the non-profit Center for Food Safety reported. “It has been estimated that upwards of 75% of processed foods on supermarket shelves—from soda to soup, crackers to condiments—contain genetically engineered ingredients.”

This means food is more abundant and cheaper.

But is it worth it? Many people do not think so.

According to a Vice News documentary, farmers worldwide routinely using all of the same kind of seeds could cause real problems in the future.

“For thousands of years, farmers maintained genetic diversity by saving their own seeds. But today many farmers buy the same seeds from GMO manufacturers.”

This means that any new disease or bug infestation could affect all of the crops that were planted from the same seed and knock out a significant portion of the food supply worldwide.

“Without a strong base of diverse seeds, food production is threatened by disease and climate change,” research produced by students at the University of Chicago stated. “Promoting the use of diverse seed types enhances food security and promotes the preservation of traditional cultural practices and values.”

But this is just one concern.

The debate over the use of herbicides will likely continue as the push for more food production comes against efforts to do so as safely and as naturally as possible.