This website requires the use of Javascript to function correctly. Performance and usage will suffer if it remains disabled.
How to Enable Javascript
South Korea Conducts First-ever Joint Naval Drills with U.S. 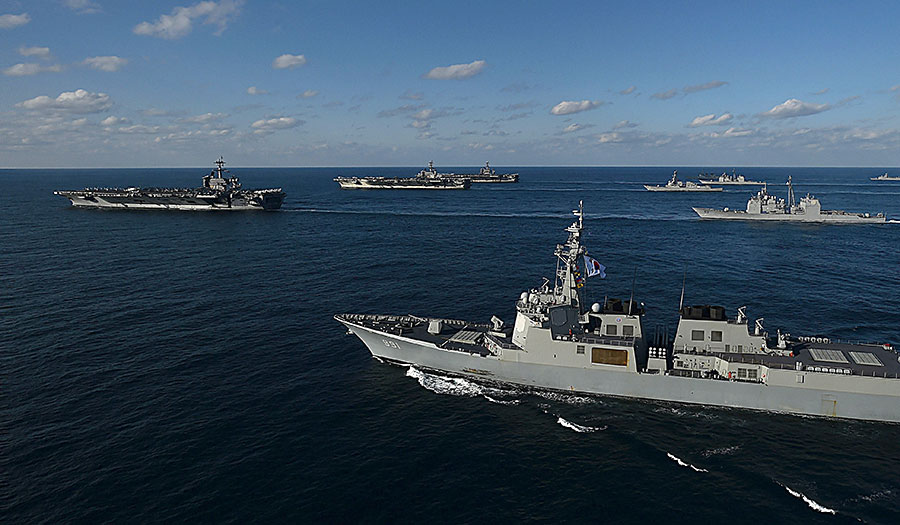 The U.S. has not mobilized three aircraft carriers in the same drill in the western Pacific since 2007, during exercises near Guam. The U.S. carriers also participated in separate exercises with three Japanese destroyers on November 12, according to Japan’s Maritime Self-Defense Force.

According to the U.S. Navy, the exercises will include air defense drills, sea surveillance, and defensive air combat training.

Washington has been sending strategic assets, also including long-range bombers, to the region more frequently for patrols or drills amid accelerating efforts by North Korea to expand its nuclear weapons program.

In recent months, North Korea has tested intercontinental ballistic missiles that could reach the U.S. mainland with further development and has conducted its most powerful nuclear test. It also flew two new midrange missiles over Japan and threatened to launch them toward Guam, a U.S. Pacific territory and military hub.

The current naval drills are intended to display “strong will and firm military readiness to defeat any provocation by North Korea with dominant force in the event of crisis,” the South Korean military said in a statement.

In addition, the exercises are occurring during U.S. President Donald Trump’s visits to Asian countries, which were primarily focused on how to counter North Korea’s nuclear weapons threat.

Pyongyang released a statement through its state news agency on November 11 that President Trump “begged for a nuclear war on the Korean peninsula” during the Asia tour, and that nothing would stop North Korea from continuing to develop nuclear weapons.

This article contains information from The Associated Press